“Black Widower” is the episode where Sideshow Bob tries to kill Aunt Selma. I think shows really start to work when the peripheral characters are fully realized, and Sideshow Bob is an amazing character. They took a sidekick and turned him into a genius criminal mastermind. I also enjoy the murder mystery aspect of the show as well as the smoking and MacGyver jokes. 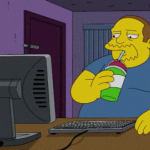 My favorite character is the Comic Book Guy. I just love his voice and Hank Azaria, who voices him, said that Comic Book Guy is based on a real guy from his college dorm. Whenever he got pissed at someone he would say “You are on my list,” which just sounds hilarious in the Comic Book Guy voice.