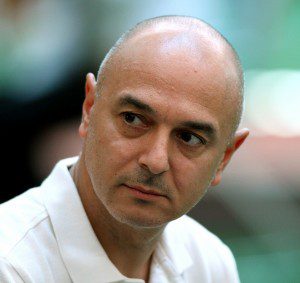 Some football managers leave behind legacies that are admired for years after they depart their clubs—boots that are hard to fill. Others leave by mutual consent, respectfully. But it seems that nowadays football managers are under the radar as soon as they scribble their initials onto their contracts. More often than not, most football managers are sacked, canned, kicked to the curb, and left to dust off their suits and try to move forward with their careers. The contract may say two years, three years, or five years, but it appears that they’ve only got five games, three games, or even two games and then they’re out.

One club owner whose infamous machete is ever ready to hack at a manager’s neck is Roman Abramovich, billionaire and owner of London-based Chelsea Football Club. However, in recent seasons, there seems to be another club owner who is sharpening his own machete and hacking away as freely as Abramovich.

Daniel Levy, 51-year-old Essex-born co-owner of ENIC investment national, and chairman of Tottenham Hotspur Football Club, may just be the new Abramovich. Since acquiring majority shares from Alan Sugars in 2001, Daniel Levy has sacked nine managers. Levy, who initially owned 29.9 percent of the shares, acquired 85 percent when Sugars decided to leave. The first victim of Levy’s machete was George Graham, and more recently Tim Sherwood. With Pochettino in charge at White Hart Lane now, it wouldn’t be a surprise if Levy is preparing to hack once more if results don’t go according to plan.

Levy, a season ticket holder, was welcomed more warmly by Tottenham fans than their previous chairman, Alan Sugars. Sugars, now Right Honourable Lord, openly admitted that he didn’t like football, and he was continuously criticized for his business-like approach to the club. Sugars’ relationship with the fans became bitterer when he appointed former Arsenal legend George Graham as manager of Spurs. As if the East London derby weren’t fiery enough, Graham’s appointment was a poke in the eyes of all Tottenham fans—with both fingers. Under Sugars’ ownership, Tottenham never finished in the top four of the Premier League and only managed to win one League Cup during the 1998-99 season, ironically thanks to Graham’s management.

The fans weren’t the only ones to detest Sugars. Players such as Jürgen Klinsmann and Teddy Sheringham described Sugars as a business man with no desire for football or the culture of the club. Sugars appointed seven managers under his reign, beginning with Peter Shreeves and finally George Graham, who brought home a trophy. It wasn’t until 2001 when Sugars completely severed all business connections with the club after selling all the shares to ENIC for a combined total of £47 million.

Like Abramovich and Chelsea, Levy is often seen in attendance during Tottenham fixtures. He is open about his love for football and especially Tottenham. Tottenham enjoyed a lot more success under Levy’s ownership as they won the 2007-08 league cup under Juande Ramos, coming from behind to beat Avram Grant’s Chelsea side.

Under Levy’s ownership, the club has consistently qualified for the Europa League and, once, the Champion’s League where they enjoyed victories over Italian giants Inter Milan and AC Milan before losing to Spain’s Real Madrid in the quarterfinals. In 2012, Levy’s loose hand swung the machete once more as Tottenham failed to qualify for the Champions League, this time Harry Redknapp was the victim. This, despite Tottenham finishing fourth but being relegated to the Europa League as a result of Chelsea’s Champions League triumph in Munich.

Abramovich has been criticized for sacking managers too often, but one thing he can boast about is his trophy cabinet. Chelsea have won several important trophies under the Russian’s ownership despite criticism for a lack of stability at the club. Interestingly enough, Abramovich and Levy have both sacked nine managers since their respective takeovers. While Abramovich has seen success consistently, winning 11 trophies, Levy has only enjoyed glimpses of success with the single trophy.

With the dismissal of Andre Villas-Boas and then Sherwood in the same season, Levy’s philosophy must be questioned. Sure he is striving for major success, but where is he headed? He approved the sale of Gareth Bale to fund transfers that only seemed promising on paper. Maybe he shouldn’t have sacked Harry Redknapp to begin with. If Levy is aiming for results, then his sacking of Redknapp oozes hypocrisy and irony. We’re talking about a man who twice led the club to top-four finishes and advanced to the knockout stages of the Champions League in their first season of the competition. Levy wanted results, but he sacked the man who had the potential to consistently produce them. Although Redknapp didn’t win any trophies, Tottenham were arguably playing their best football and looked the most likely to stake a consistent claim for a top-four finish.

The sacking of Redknapp is similar to Abramovich’s dismissal of Carlo Ancelotti, who, after ridding the club of the ghost of Jose Mourinho, seemed destined to bring the much craved stability to Stamford Bridge. Chelsea are a team who have set the bar high and must equal or raise it every season. Without stability, consistency is never guaranteed. There have been many short eras of success, but it is the long tenures that win you the big trophies on a consistent basis. Manchester United is almost too perfect an example. Many players have come and gone, finals won and lost, trophies missed and raised, but (until recently) only one manager has sat at the dugout. Success may follow a new manager, but legacies and domination are companions of stability and longevity.

There are several examples of chairmen who get the plot all wrong when they decide to fire the men on the touchline. Last season Cardiff City FC were relegated after their owner, Malaysian billionaire Vincent Tan, got rid of 41-year-old Scotsman Malky Mackay. According to reports, Tan wrote to Mackay asking him to “resign or be sacked” after a run of poor results left Cardiff flirting with relegation. The wealthy Tan even threatened to deny Mackay any transfer funds in the January window. Despite leading the club to the Premier League after a 52-year absence, Mackay was eventually sacked after he refused to step down. He stated in an interview given to BBC that he had “immense pride” with the “progress” the club had made during his reign. Ole Gunnar Solskjær was appointed manager, but he could do very little to prevent Cardiff’s inevitable relegation.

Fulham FC were another club to go down with three different men in charge. Martin Jol, who took over in 2011, was sacked at the end of November 2013, and first team coach Rene Meulensteen, 49, was appointed manager. Meulensteen, who worked with Sir Alex Ferguson at Manchester United from 2007 until the Scot retired, was sacked after only two months in charge. Perhaps Jol’s dismissal was justified after a run of five consecutive defeats, but Meulensteen’s sacking was a bad decision because the already shaky stability at the club was disrupted further. Felix Magath, 60, was the third man in charge at Craven Cottage in the same season and left with lots of work to do. It proved extremely difficult as Fulham were relegated to the second division after 13 years in the top flight.

Interestingly enough, in recent seasons, managers who feel they have been unfairly sacked have publicly spoken out. Rafael Benitez’s famous rant about his “interim” role at Chelsea and Michael Laudrup’s claim that Huw Jenkins, chairman of Swansea Football Club, informed him that he was fired through an email message are two examples.

Benitez explained to the press in February 2013 that “someone made a mistake, [when] they put my title interim manager”. He then reassured that “at the end of the season [he would] leave anyways, because I am interim, like they [Chelsea hierarchy] say.” His frustration began to become more explicit during the press conference as he repeated that “I have a title, someone decided that the title will be interim, just in case, OK fine … I do not agree, but that is [their] decision.” Finally, when asked if he knew his title was “interim manager” before signing the contract, Benitez responded, “It was a surprise for me.”

Michael Laudrup, on the other hand, explained to journalists that he was sacked “just a few hours after [shaking] hands [with Jenkins].” Laudrup also revealed that he was informed of his sacking by email and the reason was “due to breach of contract.” When he called Jenkins to clarify what “breach” meant, Jenkins was left stumped and, according to Laudrup, “he couldn’t explain, he didn’t know.” A visibly frustrated and confused Laudrup labeled the manner of his dismissal as “silly” and “incredible.”

Chairmen like Levy and Abramovich may love the game and their respective clubs, but their eagerness for results and immediate progress leaves the men who are in charge at the micro-level with not enough respect. They aren’t given a chance to see out their contracts and learn and improve from their mistakes. Pochettino is a strong manager, he proved that at Southampton, but his days are numbered—no doubt. Mourinho, on the other hand, looks calm and comfortable, but even he’ll admit that he isn’t the “un-sackable one.”

Sometimes, chairmen and owners don’t realize that sacking a manager may do more damage than repair. Chairmen and owners are often disconnected from the micro-level and don’t realize that a new man coming in will have to work hard to earn the players’ and fans’ trust. Maybe Ancelotti would have won the treble the following season or maybe Redknapp would have led Tottenham to the title following an undefeated season where they nicked Arsenal’s points record. Thanks to Levy and Abramovich, we’ll never know.