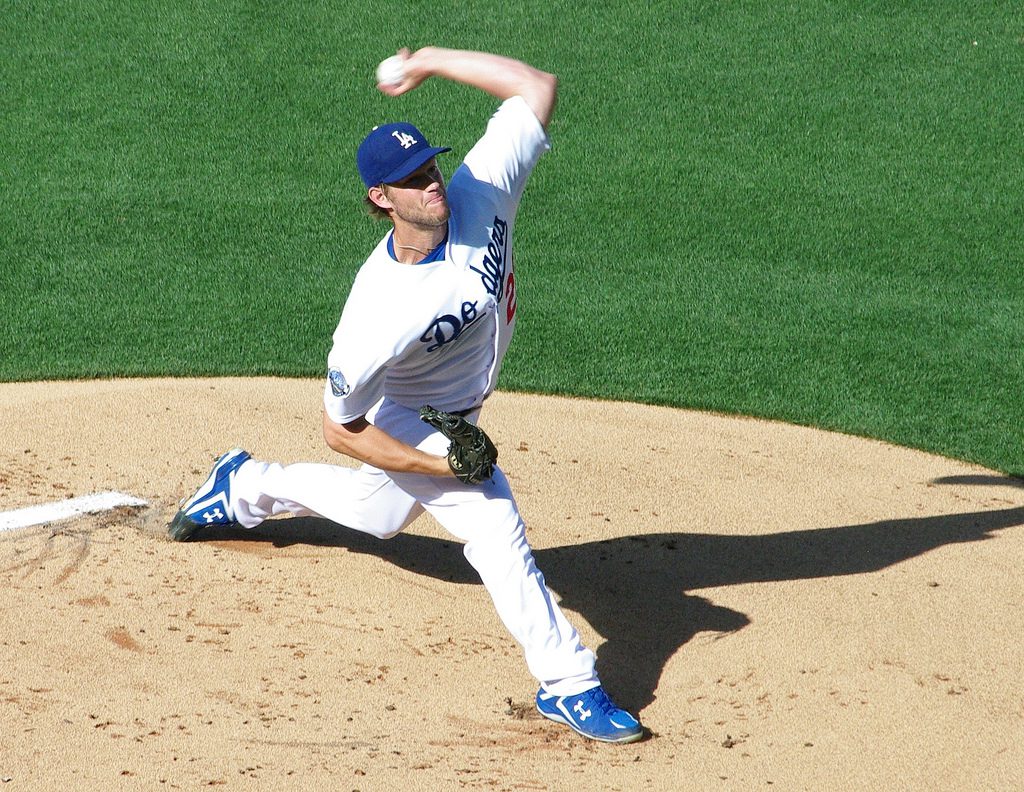 Left-handed pitchers are baseball’s platinum. The subject of mythology from Babe Ruth to Randy Johnson, these pitchers’ legacies are fiercely debated among baseball cognoscenti; the latest in this series of rhetorical exercises is entitled “Boys in Blue: Koufax or Kershaw.”

If looking for a statistical breakdown of the prowess of Sandy or Clayton there are many different sources. The similarities are striking: they ply their trade in Chavez Ravine, one wore 32 the other 22, their feats confound the greatest hitters of each generation, and although both men hurl in eras of great pitching, each is removed from theirs, as if they’re diamonds surrounded by emeralds and rubies.

Clayton Kershaw has two Cy Young Awards before the age of 26, a lifetime ERA of 2.52, four pitches that immobilize hitters, and nearly flawless mechanics. Kershaw’s dedication to his craft is legendary—he is a perfectionist and catcher A.J. Ellis recites his pregame preparation as if he’s a doctor describing a patient’s condition. Recently, the Kershaw-Mike Trout matchup excited baseball fans—the two best players at their craft, so young, so full of amazing moments to be had. Trout would go 2-for-3 with a run scored; Kershaw’s team won the game 5-4. The difference of singular greatness of hitting versus a pitcher’s ability to bend the game to his will. Kershaw’s starts mean Dodger wins—in an era when pitchers are managed and 20-win seasons are rare, Kershaw has won at least 10 games since 2010. This season he has 19 wins. His era has been under 3.00 since 2009. As if bored by being merely elite, from 2013—present his ERA is under 2.00. His fastball is not overpowering (92-95 mph) but possesses late life, yet his slider is otherworldly, and his curveball invokes whispers of yesteryear.

Sandy Koufax’s name is not bombastically hurled in the same manner of Ruth, Ted Williams, or Willie Mays. His achievements and persona are nearly mythological: “have you heard about the time Sandy struck out the side on nine pitches?”; “did you know Sandy threw a no-hitter against Juan Marichal?”; “there was one time Sandy threw a perfect game—and the other pitcher allowed one run on one hit!” (Being born 15 years after Sandy retired means my Koufaxian interludes are anecdotal.) For a few fleeting years Koufax perfected baseball with a casual indifference to fame arising from such dominance. Those who saw Koufax routinely describe the experience in terms of a religious experience. Robert Pinsky best described the Koufax experience in his poem “The Night Game.” Don Sutton noted about hitting against Koufax, “A foul ball was a moral victory,” and Yogi Berra applied his astute baseball acumen when saying, “I can understand how he won 25 games, what I don’t understand is how he lost five.” Maury Wills explained, “He didn’t. We lost them for him.” Perhaps the greatest description of Koufaxian dominance comes from his peer, Willie Mays: “Sandy would strike me out two or three times a game. And I knew every pitch he was going to throw—fastball, breaking ball, or whatever. Actually, he would let you look at it. And you still couldn’t hit it.”

The game has changed between Koufax’s 1966 retirement and Kershaw’s 2008 MLB debut. Starting pitchers who provide 6-7 innings of work before ceding the game’s outcome to bullpen teammates is the norm, Koufax was expected to finish what he started. In the three years prior to this season, Kershaw racked up roughly 230 innings pitched per year while Koufax’s era of dominance (1961-66) featured three years of topping 300 innings. To dismiss one pitcher’s accomplishments/dominance over the conditions they pitch in fails to capture each man’s transcendence. Baseball is a game of failure. The best hitters fail seven times in 10 at-bats, and the average starting pitcher surrenders roughly 3.5-4.5 earned runs per game. The sport is a masochist’s utopia. Koufax and Kershaw stand out because of their immunity to baseball’s cruelty. Eventually the game consumed Koufax’s left arm the same way Koufax’s left arm consumed the game. Kershaw has yet to (and hopefully never will) suffer a serious injury (his stint on the DL earlier this season was the first of his career)—it’s possible injuries will differentiate these pitchers. Each pitcher transcends numbers, every fifth day they literally control the arc of the game.

October 6, 1965 was the day Sandy Koufax ceased solely being the preeminent pitcher of his generation and became an American icon. Yom Kippur was the same day. Koufax wouldn’t take the ball. He wasn’t defiant nor did he use the game as a platform to broadcast his religious views to a public longing for a piece of the very private Sandy. He simply didn’t pitch. Rabbi Shais Taub explains beautifully the purpose of Yom Kippur and the context of Koufax not pitching. 1965 was 20 years after the Holocaust, and Koufax was one of, if not the most visible Jewish people in America. Koufax ceased to be “the pitcher” and became “the icon.” The churning of America was underway; political statements started becoming the norm—Cassius Clay had recently become Muhammad Ali, Dr. Martin Luther King forced the American government to codify integration, and President Johnson signed the Gulf of Tonkin Resolution 14 months prior. Koufax’s non-statement was the antithesis of his times. It was quiet, observant, and solely his. Except that outside of Israel, the largest concentration of Jewish people resides in the United States. Non-statements allow people a chance to place their values on an action, to define for themselves an action’s meaning. When his day was spent in a Minneapolis hotel room, Koufax became the face of American Judaism. This was never his aim and perhaps why not pitching on Yom Kippur resonates thunderously 49 years later. Speaking as a non-Jew, Koufax made an example of practicing without proselytizing, of respecting personal beliefs and other alternative systems without being a spectacle, but through humility and dignity.

Kershaw has a similar humility. His charitable endeavors include building an orphanage in Zambia along with winning the Roberto Clemente Award, a yearly honor for baseball’s top humanitarian. He co-authored a book with his wife about how his Christianity is infused with the couple’s desire to give back. These are laudable efforts, and the charity of the Kershaw family touches not just Los Angeles, but the world. Today’s athletes make a spectacle of their religions, with “Only God Can Judge Me” tattoos or making sure to give god a shoutout in post-game interviews only to have their hypocrisy exposed. Kershaw is evocative of the bygone era; though he published a book detailing his efforts on behalf of his religion he does not pound his chest while proclaiming the greatness of the almighty. Humility is a wonderful trait, being so dominant and maintaining the modesty of the everyday hard working man is laudable. The finality of Kershaw’s baseball story has yet to be written, and most likely, he will not have a Yom Kippur moment transcending the game as with Koufax.

These two men are brought together by great similarities—lefties, dominating the game, wearing the blue and white for baseball’s most altruistic franchise, arising from places of American lore (Koufax: Brooklyn; Kershaw: Texas), down to last names starting with the letter K. Instead of trying to celebrate which of the two is better through a hot take or a statistical breakdown, baseball fans ought to use Kershaw’s brilliance to appreciate Koufax. The beauty of a comet is not in how it streaks across the sky, but the rare nature of it. Watch Kershaw pitch or listen to Vin Scully’s call of Koufax’s perfect game, and for a moment in time that comet’s streak will shine so brightly that all must regard it with awe.