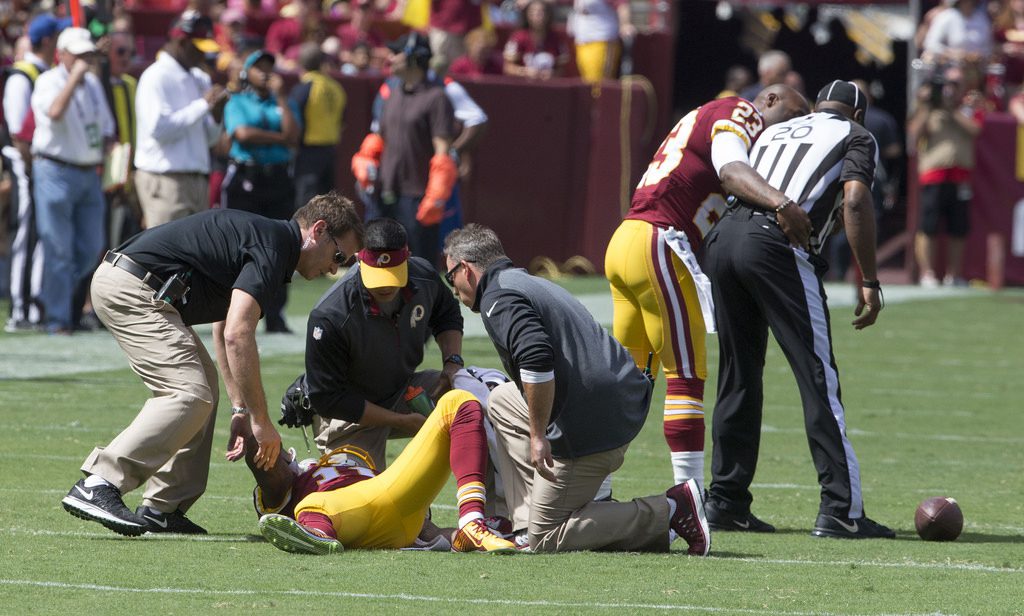 Week 2 of the 2014-15 NFL season was a traumatic one, as nearly every team in the league lost players to injury. Medical carts ran out of gas, athletic trainers worked like dogs, and team doctors earned their pay. Let’s take a look at who and what happened during these last few days.

The list may remind you of a childhood song; feel free to sing along:

Cincinnati Bengals linebacker Vontaze Burfict left Sunday’s game against the Atlanta Falcons with a concussion and pinched nerve in his neck.

Defensive tackle for the Chicago Bears Jeremiah Ratliff did not return to play the San Francisco 49ers after suffering a concussion.

Joseph Randle, running back for the Dallas Cowboys, suffered a concussion during the third quarter against the Tennessee Titans.

DeSean Jackson, wide receiver for the Washington Redskins, left Sunday’s game against the Jacksonville Jaguars in the first half with an AC injury to his left shoulder.

Chris Conte, free safety for the Bears, did not return to the game against 49ers after suffering a shoulder injury.

Quarterback Carson Palmer, of the Arizona Cardinals, didn’t return to play after a shoulder injury against the New York Giants.

Micah Hyde, free safety for the Green Bay Packers, left Sunday’s game against the New York Jets with a knee injury in the first half.

San Diego Chargers running back Ryan Mathews suffered a right knee injury during the showdown against the Seattle Seahawks.

St. Louis Rams receiver Tavon Austin sprained his MCL during their winning battle against the Buccaneers.

Roy Helu, the Redskins running back, did not return to Sunday’s matchup against the Jacksonville Jaguars because of a hurt knee.

Defensive tackle, Brandon Thompson, injured his left knee during the game against the Falcons.

A knee injury held 49ers tight end Vance McDonald on the sidelines during their matchup against Bears.

Against their game against the Cardinals, New York Giants linebacker Jon Beason suffered a toe injury and did not return to play.

A.J. Green, wide receiver for the Bengals, is recovering from an injured right foot that resulted from turf toe. He did not finish the game against the Falcons.

Bears defensive end Trevor Scott experienced an injury to his foot during Sunday’s game against the 49ers.

Tennessee Titans running back Dexter McCluster left the matchup with the Dallas Cowboys with a sore, questionable right foot.

During the Kansas City Chiefs’ matchup against the Broncos both running back Jamaal Charles and strong safety Eric Berry left the game with sprained ankles.

Shelley Smith, offensive guard for the Miami Dolphins, along with his teammate, running back Lamar Miller, suffered ankle injuries during their losing battle against the Buffalo Bills.

Oakland Raiders linebacker Sio Moore injured his ankle during the game against the Houston Texans.

Indianapolis Colts defensive end Arthur Jones is dealing with an ankle sprain that occurred during Monday night’s game against the Philadelphia Eagles.

Julio Jones, Atlanta Falcons wide receiver, was forced out of the battle against the Bengals due to an injured ankle.

During the matchup against the Oakland Raiders, Houston Texans strong safety D.J. Swearinger was forced out of the game due to a left elbow injury.

The New Orleans Saints will be missing running back Mark Ingram for about a month due to hand injury the suffered during their game against the Browns.

Gerald McCoy, defensive tackle for the Buccaneers, left during the first half against the Rams due to a fractured hand.

Raiders wide receiver Rod Streater left during the second half against the Texans due to a hurt hip flexor.

Wide receiver Eric Decker of the Jets was forced out of the Packers matchup because of an injured hamstring.

Kevin Zeitler, an offensive guard for the Bengals, hurt his right calf during Sunday’s game against the Falcons.

The Carolina Panthers will be missing running back Fozzy Whittaker as he recovers from a quadricep injury from the Detroit Lions game.

Sherrick McManis, defensive back for the Bears, injured his quadricep during the 49ers game on Sunday.

Cornerback Jason McCourty, of the Titans, left the game against the Cowboys after hurting his groin.

Redskins fullback Darrel Young sprained his back while playing Sunday against the Jaguars.