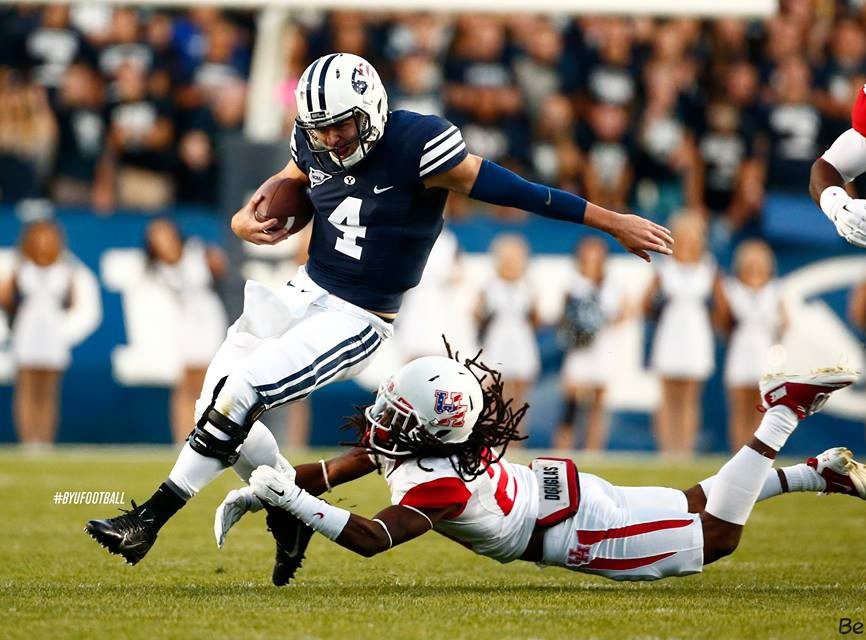 Growing up going to BYU Cougars games was always special. It was a great time for BYU sports, visiting family in Utah, and getting to see and listen to legendary players from Marc Wilson and Jim McMahon to Danny Ainge, Steve Young and Ty Detmer, as well as attending a few games in the infamous 1984 National Championship season of Cougars football is something that stays with a man for a lifetime.

BYU’s “Quarterback Factory” spanned two decades, enjoying a reputation lasting more than 10 times longer than your average NFL career (3.3 years, according to the NFL Players Association — six years, according to NFL PR). But after the Cougars’ only Heisman Trophy winner, Ty Detmer, that reputation has slowly faded away into memory.

It really began with Gifford Nielsen, in hindsight, who played at one of the two premiere Utah universities in the mid-70s that were originally founded by Brigham Young  — the other, ironically, being BYU’s most bitter rival, the University of Utah — culminating with Detmer’s Heisman Award win in 1990, the zenith of BYU’s Quarterback Factory.

There will be little debate that the following list of BYU starting quarterbacks were special, each contributing to the growth of Cougar football, each with particular hallmarks and highlights that have become unforgettable in the annals of local, and often national lore.

There are several Super Bowl rings, a national title that more or less spawned the BCS, a Heisman, countless broken records, 138 BYU wins, with no losing seasons, and 12 bowl game appearances represented on this list — a few which bowl games are stand-alone legendary showings all by themselves (Google Jim McMahon Miracle Bowl and Steve Young Holiday Bowl. Then pick your jaw up off the floor).

Then BYU QB Factory production became something akin to the mass produced duds of America’s Big Three auto makers in the ’80s and early ’90s; a few gems, but mostly unremarkable, or even downright junkers pawned off on reputation alone, but never standing the rigors of time with consumers.

Sure, there were 10-win seasons in the ensuing interim, and plenty of bowl games, but nothing so dynamic  from Steve Sarkisian, Brandon Doman, John Beck, Max Hall or Riley Nelson that we were used to from the former list of College Football Hall of Famers. Nothing quite as memorable as those who had forged the fortunate future for them. It was mostly coattails with a hint of spit and polish, nothing special.

That could all change with Taysom Hill.

When we think of good scrambling BYU quarterbacks we think of guys like Steve Young, who had a cannon for an arm and a knack for finding seams with his wheels when coverage was too good to throw a risky pass. The quarterback draw was rarely as successful as when Young ran it, so it was a little surprising to find his best seasons rushing for BYU were only 407 and 444 yards.

By comparison, Taysom Hill, currently sitting at 356 rushing yards through three weeks of play, should surpass Young’s best rushing efforts in a season in only game four of BYU’s 2014 schedule. At 118 rushing yards per game, Hill in on pace to break his own record for rushing yards by a BYU quarterback in a season, when he broke Eldon Fortie‘s 51 year old mark of 1,149 yards, last season with 1,344.

A couple of notes on that last:

Some BYU QB rushing lists will show Pete Van Valkenburg in 1972 as setting the record with 1,386 yards, but technically Van Val was a tailback taking snaps and running. He posted only 32 passing yards in that ’72 season.

Furthermore, for context, it should be noted that when Fortie set the bar for BYU QB rushing in 1962 it was in an offense called the single-wing based on rushing, with passing as only an option. Nevertheless, BYU’s first player to have his jersey retired also tossed 814 yards through the air, making Fortie a legitimate dual threat. Taysom Hill already has 689 passing yards through three weeks.

Fortie’s mark for total rushing yards (5.8 per attempt) was set in only 10 games, whereas Hill (5.7 per attempt) will play 12 — not including a potential bowl invite. Provided he stays healthy.

Even if Taysom Hill doesn’t reach the projected 1,424 rushing yards he’s on pace for, posting a season of 1,000 rushing yards and a projected 2,756 yards passing legitimizes his appearances on Heisman lists throughout the country this year, Hill popping up anywhere from fourth to eighth at last check.

Cougar fans worry about Hill staying healthy running the ball 30 times a game, but he’s often been flushed out of the pocket early on forcing him to take to the ground, something he excels at. Hill managed to make it through the gantlet in 2013 246 times, posting 10 touchdowns rushing and 19 passing (to 14 interceptions).

Fortie was only 5’11”, 170 lbs, while Hill shares a similar build to Steve Young’s at 6’2″ 230, making Hill a tough take-down even among today’s gridiron giants. And he knows to go down. It’s not as if he’s putting himself out on limb, running scared; Taysom Hill knows how to exploit an opposing defensive line, in the process keeping rushers honest and helping open up the short shots over the middle since linebackers must hesitate.

While we have to see the long ball from Hill on a regular basis, as we did with the elite tier of BYU quarterbacks past, his 69% completion rate in 2014 is very encouraging for his immediate future. An interesting comparison in numbers is 2005 Vince Young, who finished second in Heisman voting that year — Reggie Bush won the Heisman in 2005, with the award later to be vacated for NCAA violations found.

Although it may take an undefeated season by BYU for him to be taken seriously by Heisman voters when all is said and done, Taysom Hill is special, and could revive the rep of yore for BYU quarterbacks.