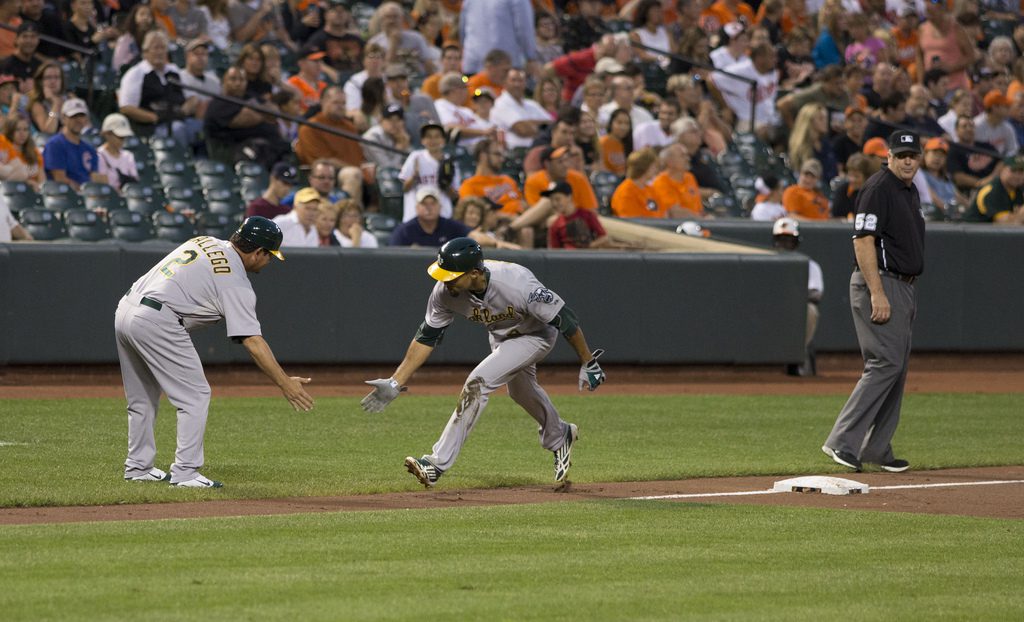 From looking like the World Series favorites to playing like the worst team in baseball, the Oakland A’s season can be summarized in one word – unpredictable.

The highs were through the clouds and the lows were hard to put into words. In the end, the season finished in heartbreaking fashion with a shocking one-game playoff loss to the Kansas City Royals. Oakland amassed multiple late-game leads, but couldn’t put away the relentless home team. With the season officially over, it’s time to dissect another year in the books and analyze the state of the organization moving forward.

Best record in baseball, multiple all-stars, and highest Las Vegas odds to win the World Series. Those aspects, which were in play throughout most of the season had the Oakland fanbase excited. But things suddenly changed as the A’s offense disappeared and the Los Angeles Angels stole the AL West division. Yoenis Cespedes was shipped away, Brandon Moss forgot how to hit, and Coco Crisp stopped reaching base. Derek Norris also suffered a large drop in production. Sonny Gray and Scott Kazmir, two starting pitchers who had dominant first halfs of the season, struggled mightily after the All-Star break. Key injuries to Craig Genty, John Jaso, and Kyle Blanks also hurt the offense. Multiple elements contributed to the team’s second half struggles.

What will garner the most attention though is the deadline trade, the one that sent Cespedes to the Boston Red Sox in exchange for Jon Lester and Jonny Gomes. Considering the fact that Lester performed rather poorly against the Royals in the one-game playoff, the exact type of game he was traded for, combined with the A’s offensive futility after Cespedes left, all leaves Billy Beane subject to unspeakable levels of doubt and second guessing. Some will be fair, some will be foul, but the animosity towards the controversial general manager will certainly be there. To put it simply, someone does have to answer questions for this collapse. Someone has to be accountable for a World Series-caliber team turning into one who exited in a one-game playoff.

Is Beane the scapegoat? Partially. But as noted earlier, multiple players who performed greatly as the A’s amassed the best record in baseball started to drop off as the team experienced a tailspin. That’s no coincidence. What Beane did though is break an unforgivable rule. He unnecessarily tinkered with a team that was playing high quality baseball. He took a powerful bat out of the lineup and a legendary arm out of left field. That’s why he’ll be faced with unwavering doubt. On the flip side and in his defense, many baseball experts loved the fact that the A’s acquired Lester. Oakland was seen as almost unbeatable when that move was made. After all, Cespedes didn’t have the stats to back up his notoriety and Lester was supposed to dominate big games. Point being, it’s complicated. It was a complicated trade and even analyzing it in hindsight is complicated. There are justified points to hating the trade and to loving it.

From watching the A’s all season, I’m hard pressed to look at that trade as the biggest reason for their disappointing finish. Key players scuffling and role players being injured have already been noted. But even some of their players who didn’t have consistent DL stints, such as Josh Donaldson and Coco Crisp, clearly played through serious pain. Norris was also banged up all year and Jed Lowrie missed some time with finger problems. And the absence of Jaso and Gentry can’t be overlooked. Jaso was a strong right-handed bat who often hit second in the lineup. Gentry was a speed demon on the bases and a versatile defensive outfielder. Cespedes was missed the most, but role players such as Jaso and Gentry also left gaping holes that were never filled.

Pitching-wise, the bullpen struggled severely when Sean Doolittle hit the DL in the middle of the A’s collapse. Ryan Cook never found his form all year and Luke Gregerson had the season-long tendency to blow leads. He was an impressive setup man, but the runs he allowed always seemed to be timely. Let’s also not forget about Jim Johnson, the nightmarish closer whose struggles forced Oakland to completely revamp their bullpen. The team managed to recover from that stressful situation and formulate a series of quality relievers. From the starter’s perspective, Jeff Samardzija found great form in his last few starts. Jason Hammel never fully worked out, but was serviceable towards the end of his stint. Gray and Kazmir had strong years overall, so for that they deserve praise, but their glaring inconsistency hugely contributed to the A’s low level of baseball in the second half.

The loss of Cespedes may have crippled the A’s chemistry, an aspect in which they probably never recovered, but it’s completely unfair to say that they exited early in the playoffs solely because of that trade. Baseball is the true team game and the loss of a hitter with a roughly .300 career on-base percentage can’t be looked to for this collapse. The Cespedes loss hurt, the drop in production top to bottom and the injuries hurt more. And, in the end, Oakland was incredibly close to advancing to the ALDS. If Lester and the bullpen could’ve maintained their large lead over the Royals, it’s possible that the A’s would’ve made noise in the ALDS and beyond. So before we crucify Billy Beane, let’s remember that baseball is also a game of luck and randomness. In a different world, the A’s would be on a plane to Anaheim to play the Angels. In this world, they’re left to pick up the pieces of a shattered season.

Moving forward, expect the A’s to continue to be a competitive team. Gray, Samardzija, and Kazmir are all under contract for next year. Drew Pomeranz could also be a candidate to join the rotation. The team will also have Jarrod Parker and A.J. Griffin returning from elbow injuries. These additions will cushion the blow of Lester leaving through free agency. Doolittle is locked up in the bullpen and Oakland never seems to have a lack of arms in that department. They could use another late-inning hard thrower, but no substantial changes in the pen need to be made.

Offensively, many questions will linger into the offseason. Should the team re-sign Jed Lowrie? Will they upgrade at second base? Can Coco be relied on as a leadoff hitter and everyday center fielder with his health? Additionally, the A’s lacked power once Cespedes left. They rarely hit home runs and desperately need some extra pop in their lineup. Beane needs to address these offensive issues through a trade or free agency. With substantial starting pitching depth, it could be smart to deal a Pomeranz-type for offense. There’s also the lingering question of whether or not Oakland will lock up Donaldson long-term. Still playing for what’s close to the league minimum, the All-Star third baseman is due for a monstrous pay raise.

The current taste of disappointment largely outweighs any positives. This devastating loss to the Royals stings and the expectations not being met hurts. But, the state of this organization is in good hands. With a low budget, they’ve been in the playoffs for three straight years and have one of the louder home crowds in baseball. The majority of their key players will be returning as they look to bounce from this disappointing finish. Beane may have missed the boat this season, but he’s still had his team be competitive throughout his tenure. He’s an innovative mind and worthy of trust to continue leading this franchise. If he can address some of Oakland’s issues this offseason, it’s realistic to conclude that the A’s will once again be in the playoff mix come September 2015. For Oakland’s sake, hopefully 2015 ends on a better note than 2014.