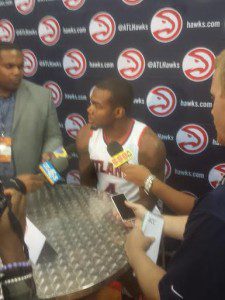 Over the offseason, the phone call heard ’round the world put the Hawks brass in the spotlight. One member of the team ownership stepped down and put his share up for sale. Another member, general manager Danny Ferry, was forced to take an indefinite suspension after racially fueled comments about the team’s fan base and potential free agents came to light.

After weeks of uncertainty and chatter on the radio and local news, the team is ready to put the controversy behind it and focus on what matters most to the players: winning.

Yesterday, during the team’s media day, you could tell that everyone was ready to move on from “Memo Gate,” and get back to showing the league that the Hawks are a team on the rise.

The day kicked off with Mike Budenholzer addressing the media. The second-year coach discussed everything from how the team is prepared to take the next step in its development to Ferry’s indefinite leave from the team due to his remarks about Luol Deng.

Budenholzer didn’t run from any questions about Ferry or his new dual role with the team.

“I’m really focused on coaching more than anything. West is going to be real critical to keeping us organized and moving forward. I was highly involved in a lot of stuff already, so I wouldn’t say that there has been a significant change to the my day-to-day routine.”

Coach Budenholzer also spoke about the unity that his team has shown in response to the controversy.

“I think our players have been communicating with me and each other on a high level. I think we’re all excited about our season and moving forward together. I feel like the overall sentiment is that they’re happy with the team and ready to move on.”

Budenholzer ended his time with the media and allowed his players to take the spotlight.

Everyone from Jeff Teague and Paul Millsap to new faces like Kent Bazemore were on hand to speak about the new season.

Many members of the press were pushing to get a quote from the team’s All-Star forward Paul Millsap. When asked about his feelings on the controversy and whether or not Ferry’s remarks would stop free agents from coming to Atlanta, Millsap told Baller Mind Frame:

“It didn’t affect me in any way. For other guys looking in, they may base their decision off that. I hope not, because I feel like we have a great group of guys here. Anyone should love playing here. I love being here myself.”

He also took the time to throw his support toward embattled GM Danny Ferry.

“This is the guy who brought me in here. He took a chance on me. Danny is someone who made a mistake. I think we all know and he knows that he made a mistake. Things happen. We’ve all said some things that we regret.”

Last season saw Millsap blend in effortlessly with his new team. The results of his seamless transition were increased numbers in scoring and rebounding. That growth was rewarded with an All-Star berth.

Paul isn’t resting on the success from last season.

“It feels good to get a little recognition, but I never really cared,” said Paul when asked about how it feels to be mentioned among the best forwards in the league.

He’s more focused on making sure he raises his game and his team to another level.

“I’m always going to want to get out there and do a better job for my teammates. There is still a lot of room for improvement.“

Millsap wasn’t the only person at Hawks media day that commanded the attention of the media.

Hawks legend Dominique Wilkins was present. It was recently announced that a statue dedicated to Wilkins will be going up in front of Philips Arena soon. Expect Dominique to become the new face of the Hawks, especially in light of shake-ups that are going on in the front office.

Wilkins was open to speak about everything about the franchise he loved and played for for years. Wilkins spoke optimistically about the future of Hawks and their relationship with the fans.

“I think it was an unfortunate circumstance. I think a change should happen. We have to make sure that something like this doesn’t happen again and that we’re all on the same page. It’s about standing above it all.”

He feels that despite the comments made by New York Knick star Carmelo Anthony, free agents should have no issue with signing with the Hawks.

“I understand what Carmelo meant. At the same time, for guys like myself and Steve Koonin to ensure that free agents would be comfortable playing here. It’s a great city and wonderful franchise. Sometimes bad things happen. You can’t worry about that. If you continue to look behind you, you’ll never see the blessings that are in front of you.”

As the media day went on, it became clear that everyone inside the franchise is ready to move past Ferry’s comments and toward a new season.

Fans saw their underdog team lose in the second round of the playoffs last year to the Indiana Pacers.

With a solid core consisting of Millsap, point guard Jeff Teague, and sharpshooting forward Kyle Korver alongside new additions like Thabo Sefolosha, the Hawks are poised to make another run at the Eastern Conference crown.

That’s worth talking about more than any memo.