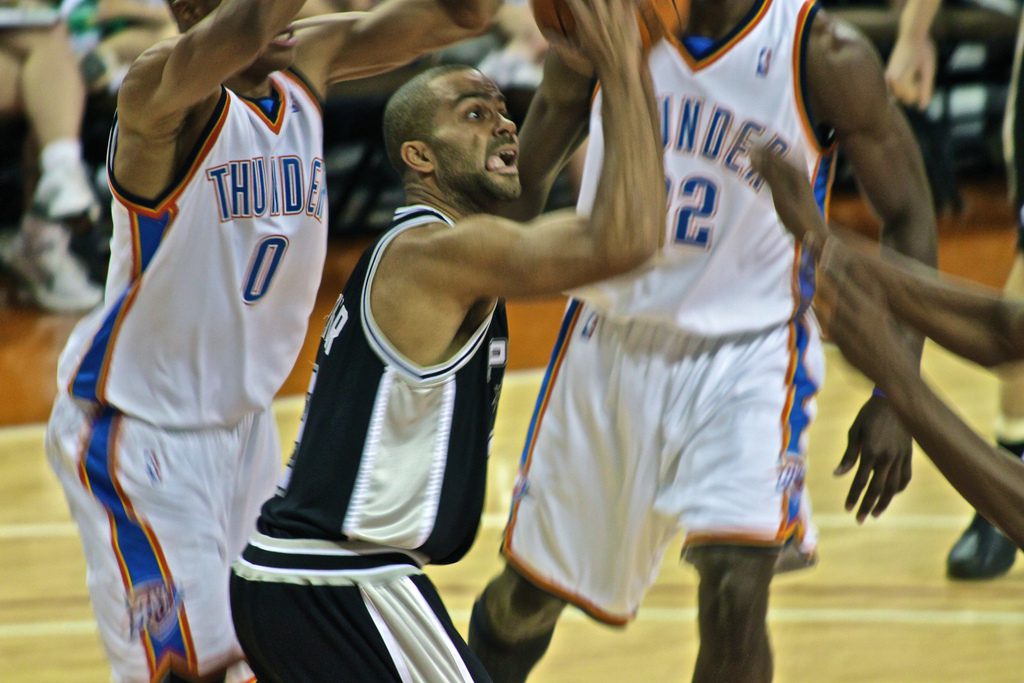 Most Important Player: Tony Parker
Parker has only played 70 games or more twice since the 2007-08 season and always seems to be affected by injury. Nevertheless, Parker is the most important player on the Spurs because he is the offensive general. Parker doesn’t need to play a ton of minutes every night, but he will need to make an impact getting clutch buckets and controlling the offense.

X-Factor: Kawhi Leonard
This is a big year for Kawhi Leonard so I look at him as the top x-factor. Leonard is coming off an NBA Finals MVP performance last season and with an aging San Antonio Spurs team, it could be his time to shine. I don’t expect Leonard to play at the level that he did during the NBA Finals last season, but in order for the Spurs to be successful again, Leonard will have to be one of the best players on the team.

Rotations: The Spurs rotation will not change from last seasons championship team as all of the starters remain intact. Tony Parker, Danny Green, Kawhi Leonard, Tim Duncan and Tiago Splitter will be the starting five, with Manu Ginobili, Boris Diaw and Marco Belinelli playing the most minutes coming off the bench. Cory Joseph will probably play a bigger role this season as coach Gregg Popovich will not want to work Tony Parker too hard in the regular season.

What Needs to Go Right: The Spurs just need to play Spurs basketball and they will be just fine. A bigger season by Kawhi Leonard will help but the Spurs are still the best team in basketball. They have the ability to win another championship this season, but at the very least they should win 60 games and make it to the Western Conference Finals.

It’s Really Bad If: Any starting five player goes down with injury. The Spurs have been fortunate to be coached by Gregg Popovich who doesn’t overplay his players, which results in fewer injuries. However, the only thing to make this season a bust is if Tony Parker, Tim Duncan or Leonard misses a ton of games.

Bold Prediction: The Spurs win the NBA Championship once again and Tim Duncan retires as a champion.

Kyle Anderson, SF
Strengths: Was a great passer in college and has maximum potential playing in the Spurs system.
Weaknesses: He’s only a rookie. Also, Anderson was a 6’8 point guard in college, so the transition to an NBA small forward may be tough.
Season Prediction: Anderson will most likely play limited minutes as a backup, but the potential is through the roof for this kid.

Jeff Ayres, C
Strengths: He’s a decent backup when Splitter and Duncan need a rest.
Weaknesses: At 6’9, he is an undersized center and has yet to be a regular starter in his first four seasons.
Season Prediction: Ayres improved last season but will continue to be a backup center playing around 10-15 minutes a game.

Marco Belinelli, SG
Strengths: Great bench player with a strong ability to score.
Weaknesses: He is not known for playing good defense.
Season Prediction: Belinelli will have another great season with the Spurs coming off the bench.

Matt Bonner, PF
Strengths: He’s one of the best three-point shooters in the league
Weaknesses: Doesn’t do much other than shoot the open three
Season Prediction: Bonner will continue to shoot open threes like he’s done his entire career.

Strengths: As a 6’11 small forward, he has great size for his position.
Weaknesses: Despite his size, he has a hard time defending his position and has average athleticism.
Season Prediction: He’s a pure bench player and will see limited numbers behind Kawhi Leonard.

Boris Diaw, PF
Strengths: Diaw is a great passer and has reinvented his career with the Spurs
Weaknesses: He isn’t the best free-throw shooter.
Season Prediction: Great bench player and could play a lot more minutes this season allowing Tim Duncan to rest for the playoffs.

Tim Duncan, PF/C
Strengths: One of the most efficient big men in the league still.
Weaknesses: The only weakness is his age, however that shouldn’t matter in the Spurs system
Season Prediction: Will continue to average close to a double-double a game, while playing under 30 minutes a game

Manu Ginobili, SG
Strengths: He’s still one of the best sixth men in the league and is vital to the Spurs offense
Weaknesses: At 37-years old, he doesn’t have the explosiveness of his earlier years
Season Prediction: Will continue to be an effective bench player.

Danny Green, SG
Strengths: Green is a good shooter as well as a good defender
Weaknesses: He doesn’t have many handles relying on being a spot up shooter
Season Prediction: Will be a solid starter in San Antonio helping the Spurs defensively.

Cory Joseph, PG
Strengths: Still has much upside as a young backup point guard.
Weaknesses: Needs improve his ability as an NBA point guard by learning how to create more offense for his teammates.
Season Prediction: Will play minutes when Tony Parker needs a rest, but won’t be a major impact in the lineup.

Kawhi Leonard, SF
Strengths: Is an excellent defender and showed that he has the ability to score in bunches with his NBA Finals MVP performance last year.
Weaknesses: May have peaked too soon. Lots of pressure on him after last season
Season Prediction: Leonard will make the NBA All-Defensive team again this season, while continuing to improve on last season.

Patty Mills, PG
Strengths: Good bench playing averaging over 10 points per game last season.
Weaknesses: He’s a very weak defender
Season Prediction: He will be fighting with Cory Joseph to become the backup point guard but should make a presence offensively when he returns from his shoulder injury.

Tony Parker, PG
Strengths: Great passer and is still one of the elite point guards in the league
Weaknesses: Even as one of the best player, Parker is very prone to injury.
Season Prediction: He plays limited minutes in the regular season but is becomes a juggernaut in the postseason helping the Spurs make it back to the Finals.

Tiago Splitter, C
Strengths: Is a great post defender, with a strong ability to score in the paint.
Weaknesses: Should be a better rebounder for his size.
Season Prediction: Will continue to be a solid center in the league shooting close to 60 percent from the floor.