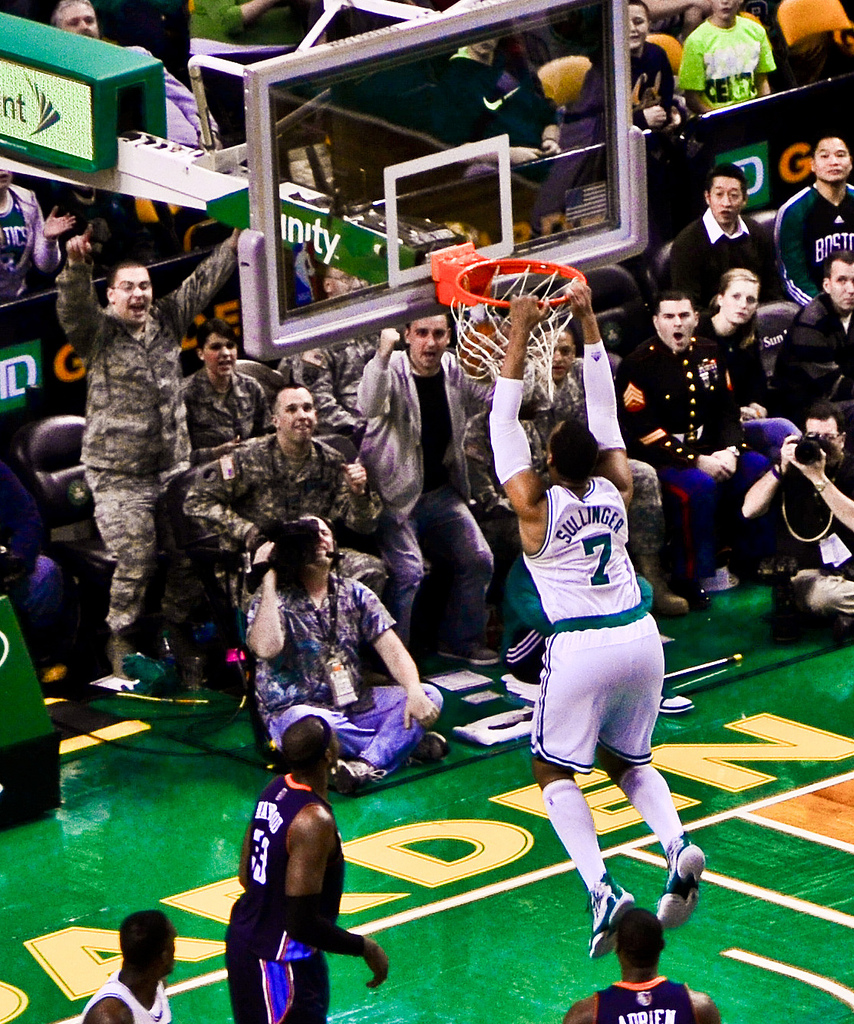 Most Important Player: Rajon Rondo
Until he walks out that door, it will continue to be Rondo. His injury is a preview to his time in another uniform. No player in recent memory has polarized Celtics fans in the span of a few plays. His weaknesses: can’t shoot and free throws are atrocious. His strengths: everything else. The broken hand magnifies any qualms Celtics’ front office executives possess regarding offering Rondo max dollars. But why would Rondo accept max money to stay on a team that isn’t contending for the next 3-4 years? The financial security is the only affirmative argument. His deal would almost be ending when the Celtics are relevant again. Furthermore, he’s been the subject of trade rumors since his career began. Ray Allen left Boston because they broached the idea of trading him, and Danny Ainge has yet to field a trade offer or propose one that didn’t involve a player every other organization considered untouchable. Rondo’s in a contract year, so his performance will be off-the-charts amazing, and then he’ll be gone. Where’s my 2008 Championship DVD?!

X-Factor: Jared Sullinger
Sullinger is a very interesting player. A stretch 4 with a nose for rebounding, if he finds a shooting touch then the Celtics will have snookered the entire league when they drafted him. Sully also is the right guy to be wearing green – I mean what a perfect nickname for Boston. The Sully Era is extremely exciting, until his back keeps going out and the Celtics sign him to a deal he never earned… my apologies. That’s my Avery Bradley anger seeping into this preview. Can’t promise it will be the last time.

Rotations: Flat out guesswork at this point. What we know is Rondo, Green, and Bradley are starting when Rondo returns. Until Rondo returns, expect Smart to run the offense in an extended audition. How do Young, Sullinger, Bass and Olynyk fit in? That’s why Stevens gets the big money. The good news is the young players will play and Stevens will be sure to experiment with the lineup until there’s some semblance of a cohesive basketball team taking the floor. This will be especially important when Green, Sullinger and Bradley get hurt. Because they will.

What Needs to Go Right: Rondo finding his inner love of New England and extending his contract. Drifting out of the Land of Unicorns, the young guys needs to step up and handle big minutes, and Stevens needs to trust them instead of turning to the likes of Gerald Wallace, Brandon Bass and Avery Bradley. Expect big minutes from Bradley only because he’s the most overpaid player in the league and eats into valuable cap room for Rondo. WHAT WERE YOU THINKING DANNY?!

It’s Really Bad If: Avery Bradley is the best player on the Celtics. That means Rondo’s injury is worse than feared or he’s gone; Green is, well, Jeff Green and Sullinger loses the ability to rebound. Seriously, four years at $32 million?!

Brandon Bass, PF
Strengths: Double digit PPG average.
Weaknesses: Rebounding.
Prediction: Strange, for a guy who looks like a beast he doesn’t seem to perform like one. Expect him to be moved before the end of the season due to his expiring contract.

Avery Bradley, SG
Strengths: Solid defender.
Weaknesses: Entire offense.
Prediction: Creates a new drinking game in New England where everyone has to take a shot of their favorite brand of whiskey any time that someone mentions 4 years or $32 million.

Jeff Green, SF
Strengths: Scoring lots of points during meaningless time.
Weaknesses: Contributing to the betterment of the team when the game has meaning.
Prediction: Green just needs to go. Danny won’t trade him however, because he traded Perkins for him and ruined the team forever. Sorry, I’m still mad. Green does more of the same, and unfortunately no one calls the Celtics with a whiz-bang trade offer.

Kelly Olynyk, PF/C
Strengths: Good size, reasonable understanding of the game.
Weaknesses: Ability to translate physical and mental tools into results.
Prediction: Hard to say, a season of NBA experience might be the toxin for a poor rookie season, but Olynyk appears to be a multi-season developmental project, what will happen is the numbers will creep up near double digits.

Rajon Rondo, PG
Strengths: Understands how to run the offense, a defensive lockdown artist.
Weaknesses: Staying healthy, shooting the ball in any way that isn’t a layup.
Prediction: Has a great contract year after he returns and gets traded before the deadline (hopeful version) or leaves via free agency (worst possible outcome).

Marcus Smart, PG/SG
Strengths: Ultra-competitive.
Weaknesses: Offensively underdeveloped for NBA.
Prediction: When the biggest knock on a guy is that he’s too competitive, that means he’s a player to build around. Smart should remind fans of a young Rondo, but with better shooting. Unfortunately, the signing of contract-albatross Bradley means Smart won’t start, but when Bradley gets injured (1-2 plays into the season) Smart will get all the time needed to develop. Maybe if he develops a good rapport with Rondo, he’ll stay. It’s ok to hope, right?

Jared Sullinger, PF
Strengths: Rebounding.
Weaknesses: Anchoring offense.
Prediction: Sully makes important strides in his offensive game and continues to emerge as a fantastic rebounder. The most optimistic prediction is people start calling him a “Poor Man’s Kevin Love that can play some defense.”

Marcus Thornton, SG
Strengths: Ability to come off the bench and provide a spark.
Weaknesses: Consistency.
Prediction: Thornton is the kind of player who seems like he should bring more to the table than he does, however he may be the right guy to provide the spark off the bench and teach the younger players how to keep their heads in the game when the game is lost.

Gerald Wallace, SF/PF
Strengths: Veteran leadership on a very young team.
Weaknesses: Age and his reckless style of play has finally caught up with him.
Prediction: Has absolutely no value this year, as his contract becomes expiring next year. The Celtics owe $20 million on this contract and it’s taking up valuable cap room.

James Young, SG/SF
Strengths: Shooting from distance.
Weaknesses: Raw, undeveloped.
Prediction: Young provides great value to a team that can’t shoot all that well from distance. Expect the rougher edges of his game to get polished by Stevens, but finding time behind Bradley, Green and (hopefully not) Wallace may be hard to come by.

Tyler Zeller, C
Strengths: Size
Weaknesses: Not as good as brother.
Prediction: Zeller starts the season starting at the 5, but ends up platooning with Olynyk and providing consistency down-low.

Most Significant Offseason Moves: The Celtics are charting a course of simultaneous rebuilding and acquiring assets for the next Garnett-Allen type additions. They traded Kris Humphries, and if he’s their biggest loss, then either they’re doing something right or the situation is far worse than expected. The drafting of Marcus Smart and James Young has the Celtics addressing needs, especially with Rondo’s injury starting the season along with his impending departure (more on this later).

Team’s Biggest Strengths: The answer to that question is on the bench. Brad Stevens had an excellent debut season, and appears to have the tools to shepherd this young group towards climbing out of their doldrums. The 25 win season belies a tactical acumen and a fierce competitiveness that should keep developing players like Smart and Young on a course towards handling significant minutes in the next few years.

Team’s Biggest Weaknesses: No question, it must be health, and Rondo’s latest issue exemplifies this concern. Jeff Green, Jared Sullinger and Avery Bradley all have issues with staying on the court. Rondo and Sullinger are two players that could make the Celtics a solid 30+ win team and with the dearth of quality in the Eastern Conference, that may mean a playoff berth. If the Celtics are healthy – a Big Dig-sized if – they could make the race for 3rd in the Atlantic interesting.

Goals for this Season: Get better, the little things with greater efficacy, and enjoy the last sights of Rondo in green. Seriously, he’s gone folks.