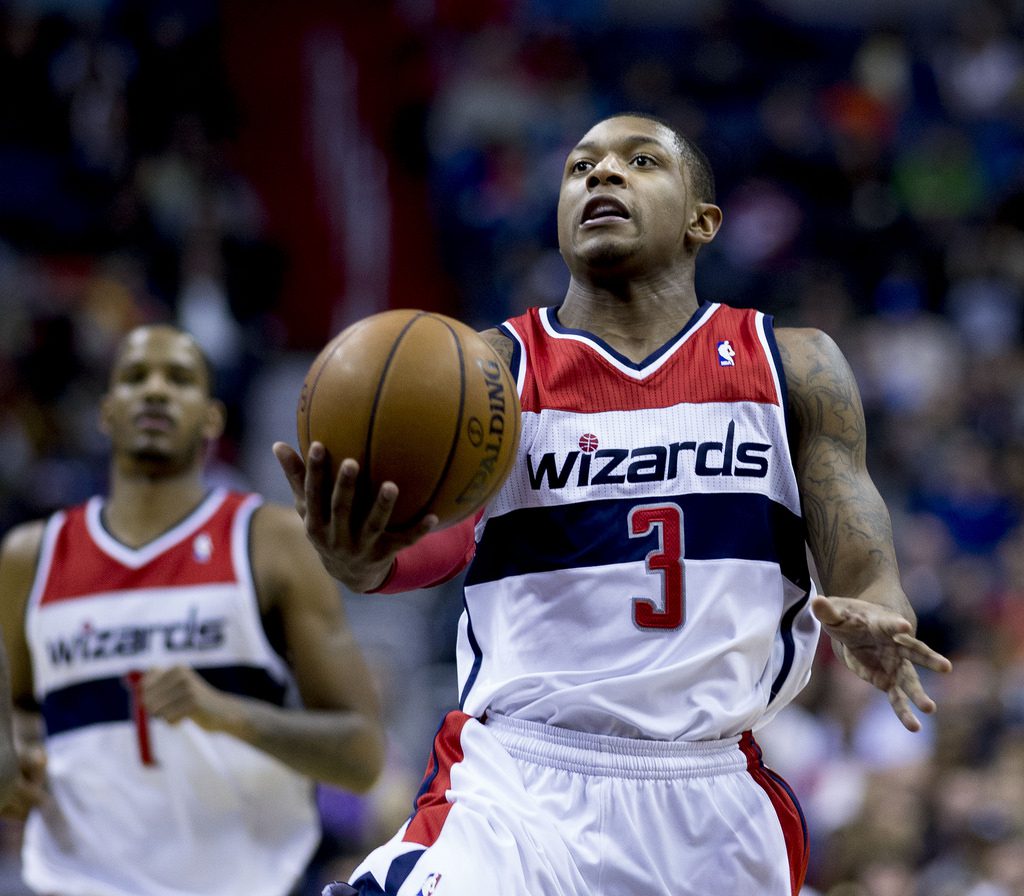 This kid can flat out shoot. Beal was deadly from downtown last season shooting 40.2% from beyond the arc. Not only can the 21-year-old shoot, but he also has explosive speed that helps him drive the lane and attack the rim. More importantly that speed allows him to run the floor tremendously and get easy buckets on the fast break.

Beal is only heading into his third season as a pro, so there should be plenty of room to grow, especially playing alongside John Wall and the newly acquired Paul Pierce. The addition of Pierce should open up even more shots for Beal, which will help his stats exponentially.

If you’re looking for a fun basketball team to watch, get some popcorn and throw on a Wizards game this season because their backcourt is going to be blast to watch.

Johnson will always have a place in my heart because he single-handily made my trip to the Barclays Center amazing when I was attendance for this.

If I had to rely on one player to hit a game-winning shot, Johnson is in the category with LeBron James and Kevin Durant and has proved to be one of the most clutch players in the league for the last few years. Despite his ability to hit that game-winning shot, he had a down-year last season only averaging 15.8 PPG, to go alongside 3.4 RPG, and 2.7 APG. Johnson picked up his game in the postseason, bumping up his PPG average to 21.8, so that may be an indicator to show that Johnson is in for another big year in Brooklyn.

Stephenson led all shooting guards last season with 20 double-doubles, but more impressively led all NBA players with five triple-doubles. His monster numbers were one of the main reason the Indiana Pacers made it to the Eastern Conference Finals last year, but unfortunately for Indiana, Stephenson headed to Charlotte in the offseason.

Stephenson only has about two years under his belt as a regular starter in the NBA, but his play last season proved that he is one of the best shooting guards in the league. Stephenson averaged a steady 13.8 PPG, a shooting guard best 7.2 RPG and 4.6 APG last season, which proved his worthiness as one of the most talented guards in the league. At only 24-years-old, Stephenson should continue to develop, as his numbers should grow in Charlotte.

In terms of point production, Ellis is always one of the best scoring guards in the league. Averaging 19.4 PPG for his career, Ellis is a magician around the rim always making difficult shots look easy. When he’s not making acrobatic shots in the paint, Ellis can be found driving the lane, using his quickness to get by defenders and throwing it down with authority.

Not only is Ellis is a fun player to watch on the offensive side of the ball, but he helps his team tremendously averaging 1.64 steals per game (third for shooting guards), which usually translates into some easy fast-break baskets.

While normally listed as a point guard, Dragic found himself playing a great deal of shooting guard last season, due to the Suns acquisition of Eric Bledsoe. Look for the trend to continue as positions in the Suns backcourt seem to be interchangeable. Dragic is a talented lefty who has no trouble attacking the rim against anyone, and proved last season that he is one of the best guards in the league with a breakthrough year in Phoenix. Dragic was named to the 2014 All-NBA Third Team and deserved this accolade averaging 20.3 PPG, 5.9 APG and 1.37 steals per game.

Dragic has the ability to score from anywhere on the court and which makes his passing game all the more dangerous. Dragic is a crafty basketball player and at times can makes defenses look ridiculous. After winning the NBA’s Most Improved Player last season, look for him to continue his upward trend into the 2014-15 season.

When healthy, Dwyane Wade is still dynamic, but that’s the question. When is he going to be healthy? Wade had the best field goal percentage of any shooting guard last year shooting 54.5% from the floor, which shows that his game is still very efficient.

However, Wade only played 54 games last season due to knee injuries, so it’s tough to see if he’ll ever play a full season again. Wade is still a talented player, but we just don’t know what’s going to happen this year with the departure of LeBron James. The logical assumption would be Wade is more likely to get injured by playing more minutes, but at the same time, it could work the other way possibly bringing a revival to his career to be the “man” again. Wade could easily be higher on this list, but there is too much uncertainty at the moment.

DeRozan has seen steady improvements every season with last year by far being his best yet. The 25-year-old Compton native was selected to his first (of many) NBA All-Star teams while leading his Raptors to their first playoff appearance since 2008.

DeRozan was also selected to represent Team USA at the 2014 FIBA Basketball World Cup, and with this prestigious honor it should only help his confidence grow. His averages of 22.7 points, 4.3 rebounds, and 4.0 assists per game was one of the best of any guards last season and with his trend of growth, expect DeRozan to have an even better season on the horizon.

Klay Thompson is transforming into a elite young shooting guard and  proved so this summer at the 2014 FIBA Basketball World Cup. In only his third NBA season, Thompson was great in the tournament, playing meaningful minutes while averaging 12.7 PPG.

Thompson continued to show that he’s a threat from the three-point line and beyond, shooting 41.7% from deep last season. Thompson averaged seven three-point attempts per game, which could potentially cause a problem, but with such a good percentage, it hasn’t been, as Thompson averaged a career-high 18.7 PPG and also shot a career-best 44.4 FG% throughout the 2014-15 season.

Not only does he have a killer jump shot, but Thompson is also an excellent defender. Thompson is usually responsible for guarding the opponents best perimeter scorer each night, and has been tabbed a “big-time defender” by his former coach Mark Jackson, along with many NBA pundits.

Bryant is only this high on the list based on his career and because he’s “healthy.” With a devastating Achilles injury and a knee injury just eight months apart from each other, it’s tough to say if Kobe will ever return to play at an elite level. He’s about to enter his 19th season in the NBA, which in basketball years is about year 100, so Father Time is definitely against him. However, this is Kobe Bryant we’re talking about. Two years ago he averaged 27.3 PPG and if it wasn’t for the injury last season he may have done it again.

Bryant loves breaking records and the most lofty of all is sitting right in front of him. He’s fourth on the NBA’s All-Time scoring list with 31,700 points and according to ESPN, if he averages 20.0 PPG to start the season, he should pass Michael Jordan who is in third place by Christmas. Beating Jordan is definitely something that Bryant dreams about so this should be his motivation this season.

With the departure of Mike D’Antoni in Los Angeles, it means that Bryant won’t be playing 48 minutes per game anymore, so as long as newly elected coach Byron Scott has Bryant playing the right amount of minutes, Bryant could transform into the younger player that he used to be.

Harden’s ability to score so often is due to his amazing ability to get to the line. Harden’s 665 free-throw attempts last season led the NBA and this is truly what makes Harden so deadly. Being able to draw fouls is an underrated skill that not only leads to baskets for Harden, but it can also lead to getting his opponents into foul trouble.

Harden cannot only score, but he’s a very deft passer averaging 6.1 APG last season, leading all shooting guards. Despite being one of the most dynamic guards in the league, unfortunately his defense stinks. Harden should continue dominance from the shooting guard for years to come, but if he wants to be considered a top-five player in the NBA, he better stop looking like a pylon on defense.