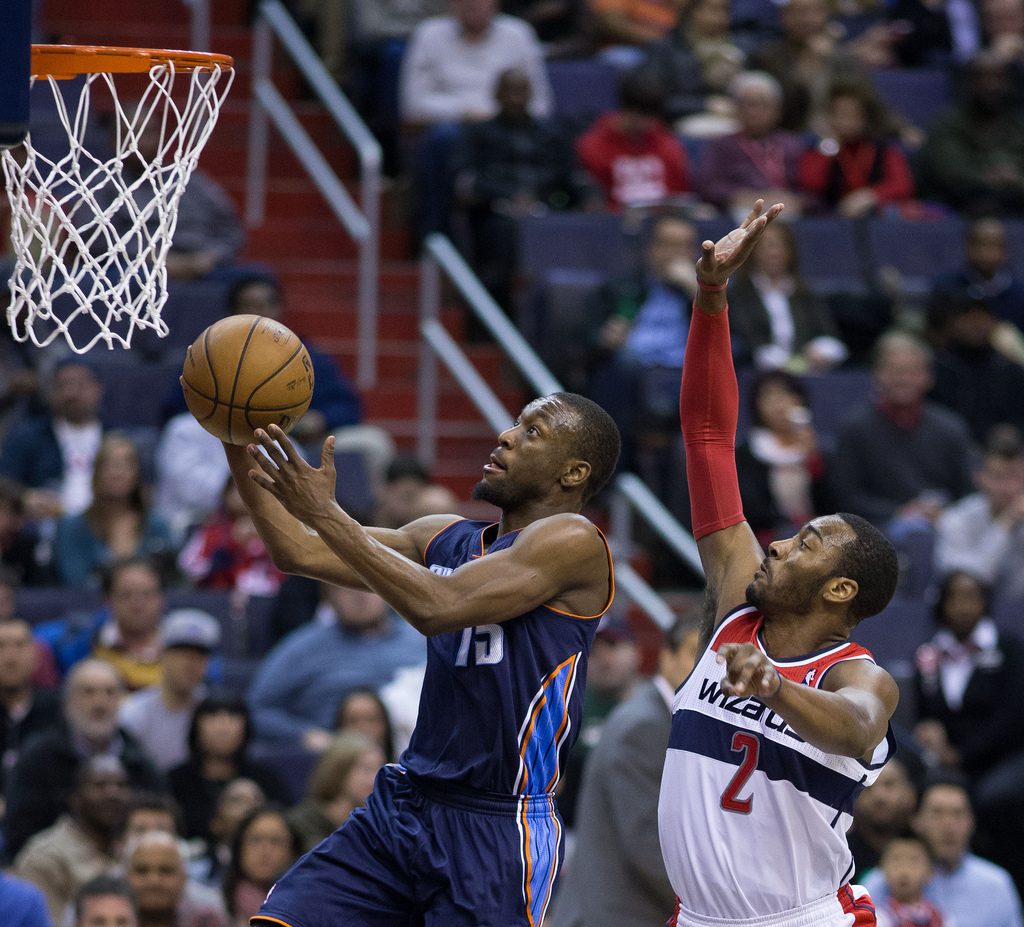 The 2014-15 Charlotte Hornets will look to build on last season’s postseason appearance and hope to make the leap to becoming a contender of sorts in the Eastern Conference. Here are some projections for the upcoming season.

Most Important Player: Al Jefferson
Al Jefferson had a phenomenal first season with the then-Charlotte Bobcats, averaging 21.8 points and 10.8 rebounds per game. Despite being snubbed as a selection to the Eastern Conference NBA All-Star team, Jefferson was named to the All-NBA Third Team. He was arguably the best low-post scorer in the NBA last season. His post presence helped spaced the floor for the Bobcats to get open shots on the perimeter. The Hornets will need a repeat performance this season to improve their chances of becoming a contender in the Eastern Conference. The Hornets offense will again be centered on Jefferson’s ability to score in the post and space the floor for shooters. The addition of Lance Stephenson should help Jefferson become even more dangerous in the post; he should see fewer double-teams playing with an All-Star caliber perimeter player. Jefferson is in position for a career year. He is the key to the Hornets taking the next step in becoming a legit contender.

X-Factor: Michael Kidd-Gilchrist
Even though Michael Kidd-Gilchrist is an awful shooter, he is a great perimeter defender and has found ways to score on fast breaks and slashing to the basket. In the offseason, MKG worked hard on his shot with Hornets assistant coach and former NBA All-Star Mark Price. If his shooting improves, MKG will become the player that the Hornets expected him to be when he was drafted second overall in 2012. MKG should make the All-Defensive team, and if his scoring increases, he could also win the Most Improved Player award.

Sixth man: Gerald Henderson. With the signing of Stephenson, Henderson will come off the bench, a role that he should thrive in.

Rest of the bench: Brian Roberts will be the backup point guard, Gary Neal, Jeffery Taylor, and P.J. Hairston will all fill in at the wings, and Cody Zeller and Jason Maxiell will will back-up the frontcourt.

Players who will see limited minutes: Bismack Biyombo, Noah Vonleh. Biyombo has been a disappointment so far. The Hornets will use him when the front court is in foul trouble or when injuries occur. Vonleh is a young rookie and will be brought along slowly; he will spend most of this season learning from the veterans on how to be an NBA player.

What Needs to Go Right: Stephenson needs to mesh with the team. His character has been questioned throughout his career. The Hornets are confident that Stephenson will buy into Steve Clifford’s system and that he will fit in with his new teammates. In order for the Hornets to be successful, they need both to happen. If Stephenson doesn’t have issues off the court, the Hornets will thrive on the court. He is the second-best player on the roster after Jefferson, and will be vital to their success this season.

Its Really Bad If: Al Jefferson gets injured. Jefferson missed time with injuries last season. When he is not healthy the Hornets are not as good of a team. In the first-round playoff series against the Miami Heat last season, the Hornets played well when Jefferson was healthy. Once he got injured, the Heat were able to run away with the series, winning 4-0. In order for the Hornets to contend in the Eastern Conference, Al Jefferson needs to stay healthy. If Jefferson misses significant time due to injuries the Hornets will struggle.

Bismack Biyombo, C
Strengths: Rebounding, shot blocking.
Weaknesses: Offense.
Season Prediction: Biyombo has been a disappointment so far in his NBA career. This season he will fight for playing time in the frontcourt but will end up buried on the bench. If the Hornets look to make a trade during the season Biyombo will be part of the deal.

P.J. Hairston, SG
Strengths: Shooting ability.
Weaknesses: Immaturity.
Season Prediction: Hairston has had several off-court incidents since being drafted 24th overall in the 2014 NBA Draft. He has the potential to be a key part of the Hornets rotation this season, but he must stay out of trouble. Hairston will have a productive rookie season and be selected to the Rising Stars Challenge during the 2015 NBA All-Star Weekend. His ability to stretch the floor with his shooting will earn him minutes in key parts of games.

Gerald Henderson, SG
Strengths: Mid-range shooting, defense.
Weaknesses: Consistency, three-point shooting.
Season Prediction: Henderson goes from the starting lineup to the sixth man role. He should flourish in this spot and become instant offense off the bench. Henderson will be in the mix for the Sixth Man of the Year award. With the addition of Lance Stephenson, pressure is being taken off Henderson to become an All-Star caliber player. Now he can relax and play his game.

Al Jefferson, PF/C
Strengths: Mid-range shooting, low-post scoring.
Weaknesses: Defense.
Season Prediction: Jefferson will have another great season; he will once again lead the Hornets in points and rebounds. It will be impossible to keep him off of the 2105 Eastern Conference All-Star team. If he can improve his rim protection Jefferson will become one of the most complete big man in the NBA.

Michael Kidd-Gilchrist, SF
Strengths: Transition scoring, defense.
Weaknesses: Shooting.
Season Prediction: MKG could have a breakout season if his shot has improved; he is already a great defender and plays as hard as anyone in the NBA. He should make the All-Defensive team and get more minutes in crunch time if his shot is improved.

Jason Maxiell PF/C
Strengths: Toughness, post defense.
Weaknesses: Offense.
Season Prediction: Maxiell is a solid veteran with playoff experience. He will make the team as a backup and provide depth behind Jefferson and Zeller.

Gary Neal, SG/SF
Strengths: Three-point shooting.
Weaknesses: Offense within the three-point line.
Season Prediction: Neal was a great in-season pickup for the Hornets last season. He will provide three-point shooting to help stretch the floor for Jefferson and driving lanes for Kemba Walker and Lance Stephenson. Neal will have another solid season as he has had throughout his career.

Jannero Pargo, PG
Strengths: Ball distrubtion.
Weaknesses: Shooting.
Season Prediction: Pargo was brought in to be the third point guard on the roster and to help mentor Walker and Brian Roberts. He will not play much unless there is an injury in the backcourt.

Brian Roberts, PG
Strengths: Mid-range shooting, defense.
Weaknesses: Consistency.
Season Prediction: Roberts signed with the Hornets this offseason to be the backup point guard to Kemba Walker. He played well last season defensively and as a floor general. Roberts will be an upgrade at backup point guard over Luke Ridnour.

Lance Stephenson, SG/SF
Strengths: All-around game, defense, toughness, playmaking ability.
Weaknesses: Temper.
Season Prediction: Stephenson is exactly the type of player the Hornets needed to sign, a young hungry wing player that has All-Star potential. Lance Stephenson will make the All-Star team and make the All-Defensive team. He is primed for a breakout year, but expect a lot of technical fouls.

Jeffery Taylor, SG/SF
Strengths: Three-point shooting, defense.
Weaknesses: Health and status of suspension.
Season Prediction: Before Taylor’s season-ending injury last year he was developing into a “three-and-D” specialist. Despite being healthy he has been charged with domestic violence stemming back to an incident in Michigan. His status with the team and in the NBA is unclear.

Noah Vonleh, PF/C
Strengths: Upside, rebounding.
Weaknesses: Experience, strength.
Season Prediction: Vonleh is an intriguing young player, the Hornets were excited that he fell to them in the draft. He will not play much this season and will learn how to be a professional this season. He will show flashes of what he will be in the future but will have plenty of rookie moments.

Kemba Walker, PG
Strengths: Speed, quickness, scoring.
Weaknesses: Size.
Season Prediction: Walker has improved each year of his NBA career. Walker will have a career year and will cash in with a new contract soon.

Marvin Williams, SF/PF
Strengths: Versatility, defense.
Weaknesses: Consistency.
Season Prediction: Williams was brought in by the Hornets to replace the loss of Josh McRoberts. He will fill in the role of stretch power forward for the Hornets. He will have great games and some games when he is a non-factor, which is pretty much the story of his career.

Cody Zeller, PF/C
Strengths: Mid-range shooting, mobility.
Weaknesses: Consistency, strength.
Season Prediction: Zeller has been working hard this offseason to get stronger. If he can compete with stronger big men on a nightly basis he will take the next step in his career and eventually become a starter. Zeller has a good mid-range jump shot, if he can complement it with the ability to finish strong around the rim, he could have a career year.