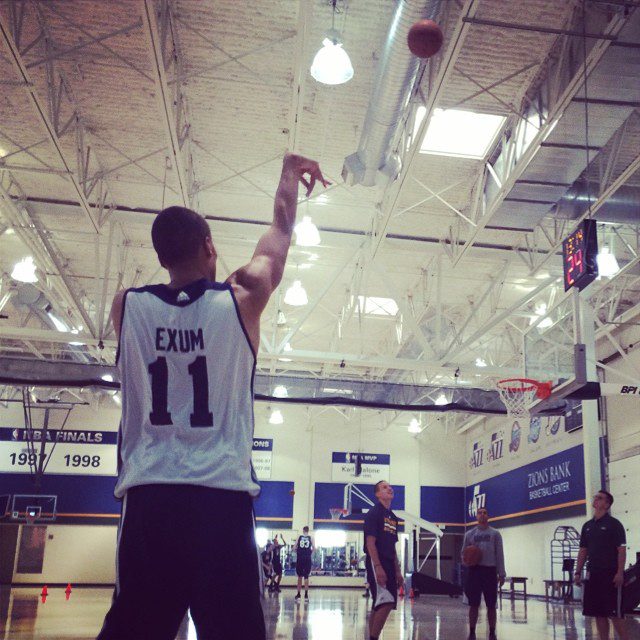 Image courtesy of the Utah Jazz/Facebook.

In recent years, the Utah Jazz haven’t been a team to get excited about. That is all about to change. With a new coach, a handful of new players, and an average age of 23.5, things are sure to get a bit jazzy this season in Utah.

Most Important Player: Dante Exum
Though teammate and rookie Rodney Hood may also play a key roll in the Utah’s 2014-15 season, 19-year-old rookie guard Dante Exum will likely be the most important player for the Utah Jazz. The first-round draft pick from Melbourne, Australia has already proven his worth by becoming Australian National Team’s youngest member at the age of 15 and leading the team to the semifinals at the 2013 U-19 World Championships. Exum’s versatility in both guard positions will prove useful as a solid relief for Alec Burks and Trey Burke.

Though some fans may consider Exum too young for the league, his passion for the game, consistent work ethic and natural leadership abilities will undoubtedly pay off for this young team. With mentors like Steve Novak and new head coach Quin Snyder, Exum is expected to be a coachable, quick learner who, if given sufficient court time, will shine throughout the season.

X-Factor: Head Coach Quin Snyder
After a quick one-year stint from former head coach Tyrone Corbin, the Jazz have hired Quin Snyder as the team’s new head coach. Snyder has an extensive assistant coaching background spanning over 20 years and encompassing teams like the Duke Blue Devils, Los Angeles Lakers, Philadelphia 76ers, and CSKA Moscow in Russia. Snyder’s basketball IQ is considered one of the best in the game and he is known for developing strong talent—an attribute that will come in quite handy with this predominately immature team. Though Utah’s front office is confident about the new hire, the question is and always will be: will the players buy into Snyder’s coaching methods and leadership? Considering last season’s dismal record (25-57, the Jazz’s worst since 1979-80) and the young roster, chances are things will go better this year for Snyder and his group of players. It will be interesting to see how the team—and the community—responds to Snyder’s leadership. One thing is for sure, however: with the bar set that low, there is nowhere to go but up.

Rotations: Backcourt starters will likely be Trey Burke and Alec Burks. Forwards Gordon Hayward and Derrick Favors, along with starting center Enes Kanter, will provide power and experience in the paint. Snyder, who is known for running a quick offense, may finally provide these five with the tempo they need for some serious scoring. Burke and Burks both play well under fast, offensive pressure and though they may need work on passing the ball, Burke’s strong handling skills and Burks’ consistent drive to the finish will help put points on the board. When matched with Kanter’s strong offensive rebounding skills and Favors’ heavy defensive presence, Hayward will have the space and time needed to sink the three-pointers he’s known for. There are, however, a few players who could potentially scramble this starting lineup. After an excellent performance in the Las Vegas Summer League, Hood, Exum, Trevor Booker, Rudy Gobert, and Jeremy Evans will provide these starters with talented, reliable relief … and possibly a run for their money.

What Needs To Go Right: In general, the Jazz players need to buy into Snyder’s coaching methods and believe in their coaching staff. Secondly, many players need to “beef-up” and gain more muscle. Size is a weakness for a lot of the men on the roster and in a league notorious for large men, pumping that iron is essential. On a more specific note, the starting five need to pull their weight to let each other shine. Though they are all decent scorers, Kanter and Hayward need to brush up on their jump shot and Burke needs to distribute the ball more often, instead of taking risks. If he insists on shooting more than passing, Burks needs to improve his three-pointers and jump shots. Lastly, Favors is going to have to step-up his free-throw game if he wants to get those three-point plays.

It’s Really Bad If … the team ends the season with a 24-58 record. The likelihood of that happening, however, is slim. So the second-worst thing that could possibly happen is if Snyder’s hard-run offense is too much for the young team to handle. Kanter is known for being slow and seemingly lazy at times on the court. Hayward, along with relief players Gobert and Hood, has been known for a lack of aggression and contact in both defensive and offensive scenarios, and Burke and Burks don’t share the ball as much as they like shooting it. If these players stick to their ways during one of Snyder’s quick offensive runs, things are guaranteed to get ugly.

Bold Prediction: In a notoriously tough Western Conference, the Jazz are looking at yet another year of building, molding, and growing. With considerable depth to the team, however, there are sure to be some epic wins and nail-biting losses. What is my bold prediction, though? After Jazz rookie forward Hood will outplay Los Angeles Lakers rookie forward Julius Randle, the Jazz will reign triumphant and end the season in the top 10 for the Western Conference.

Trevor Booker, PF
Strengths: Rebounding, very mobile, and not afraid to be aggressive.
Weaknesses: Small frame for a forward and no versatility.
Season Prediction: He will gain significant playing time as relief for Kanter and Favors. His drive for the rim and full-contact style will work well with Snyder’s offense.

Trey Burke, PG
Strengths: Performs well under pressure, good ball handler, and great defense.
Weaknesses: Body size and passing the ball.
Season Prediction: He will earn his keep this season as the starting point guard and, if willing, could make a deadly combo with Exum sharing the court.

Alec Burks, SG
Strengths: Drive to the basket, athletic, versatile, and strong offense.
Weaknesses: Small build, distribution, jump shots, three-pointers.
Season Prediction: With Burke and Exum in the mix, Burks will see an action-packed season and may very well end the season as the Jazz’s MVP.

Ian Clark, SG
Strengths: Sharing the ball, defense, quick hands, and great anticipation.
Weaknesses: Strength and speed to the basket.
Season Prediction: Clark may see a little more playing time this season than last, but not much. The summer league didn’t fare well for Clark’s shooting game, but with more efforts focused on making plays, we could be seeing him as a stand-in point guard.

Jack Cooley, PF
Strengths: Aggressiveness, scores in the post, rebounds.
Weaknesses: Awkward and large on the court and lack of endurance.
Season Predictions: I don’t think this free agent will be seeing much playing time this season due to a stacked forward roster. However, his size and aggressiveness may prove useful against strong offensive teams.

Jeremy Evans, SF
Strengths: Rebounds, speed on the court, dunking, and athletic ability.
Weaknesses: Offense, possession in the post, and jump shots.
Season Predictions: We will see some jaw dropping dunks from this guy … when he gets to play. Though he may not be the best offensive player, Evans’ speed and agility will earn him some court time when Hayward needs a break.

Dante Exum, SG/PG
Strengths: Acrobatic with scoring, moves well without the ball, versatile in both guard positions, coachable, hard-working, and in-it-to-win-it attitude.
Weaknesses: Ball handling, free throws, and inconsistency on the court.
Season Predictions: Dare I predict Snyder starts Exum by the end of the season? It may be a stretch, but we will see a lot of this versatile player as he stands in and plays along side Burke and Burks. If given enough space and time on the court, he has potential to be one of Utah’s top scorers.

Carrick Felix, SG/SF
Strengths: Moves well without the ball, versatile defender, strong IQ, and athletic.
Weaknesses: Body size and handling the ball.
Season Predictions: Considering that the Jazz traded three players for Felix, they obviously saw the potential in his strong defensive skills. Though he may not get significant playtime in the start of the season, I think we will see more of Felix later in the year after he bulks up.

Rudy Gobert, C
Strengths: Size (7’2’’ height, 7’9’’ wingspan), great rim defense, and speed down the court
Weaknesses: Vertical jump, weak upper body, and lack of aggressiveness.
Season Predictions: This tall Frenchman will get some quality court time as center relief for Kanter. Though this is his second year in the league, Gobert’s hustle game may be a better match for Snyder’s offense if Kanter can’t get some pep in his step.

Gordon Hayward, SG/SF
Strengths: Offensive rebounding, good basketball IQ, and quick thinker.
Weaknesses: Shots from the field and lack of aggression.
Season Predictions: Hayward will be a key offensive player but, with Hood on his heels, he will have to step up his defensive game if he wants to remain a starter. With this being his fifth season in the NBA, hopefully he can double as a mentor and leader for the younger members of the team—lord knows he’s smart enough!

Rodney Hood, SG/SF
Strengths: Long-range three-pointers and free throws.
Weaknesses: Size and offensive rebounding.
Season Prediction: If this rookie can get aggressive near the basket and learn to use his 6’8” frame, he will be one of the Jazz’s key players. If he sinks threes like he did during the Summer League in Las Vegas (seven three-pointers in one game), Snyder will have no choice but to use him.

Enes Kanter, C
Strengths: Wingspan (7’3”), strength, and rebounding.
Weaknesses: Speed down the court and inconsistent with the ball.
Season Predictions: If Kanter can go the season without re-injuring his knee, Snyder is planning on starting him as much as possible. I will predict, however, that unless he can become a more agile player he may find himself contending with Gobert for that starting position.

Toure Murry, SF
Strengths: Versatility and intelligence on the court.
Weaknesses: Free throws and rebounding.
Season Predictions: As a backup for both Burke and Exum, Murry won’t be seeing a lot of playtime this season. However, with a man his size on the guard roster he may have a shining moment yet.

Steve Novak, SF
Strengths: Three-pointers and agility on the court.
Weaknesses: Defense and age.
Season Predictions: Going on his ninth year in the NBA, Novak his seen just about all of the court he is going to see. Though he may not play an important physical role during games, he will definitely serve as a mentor for Hood.