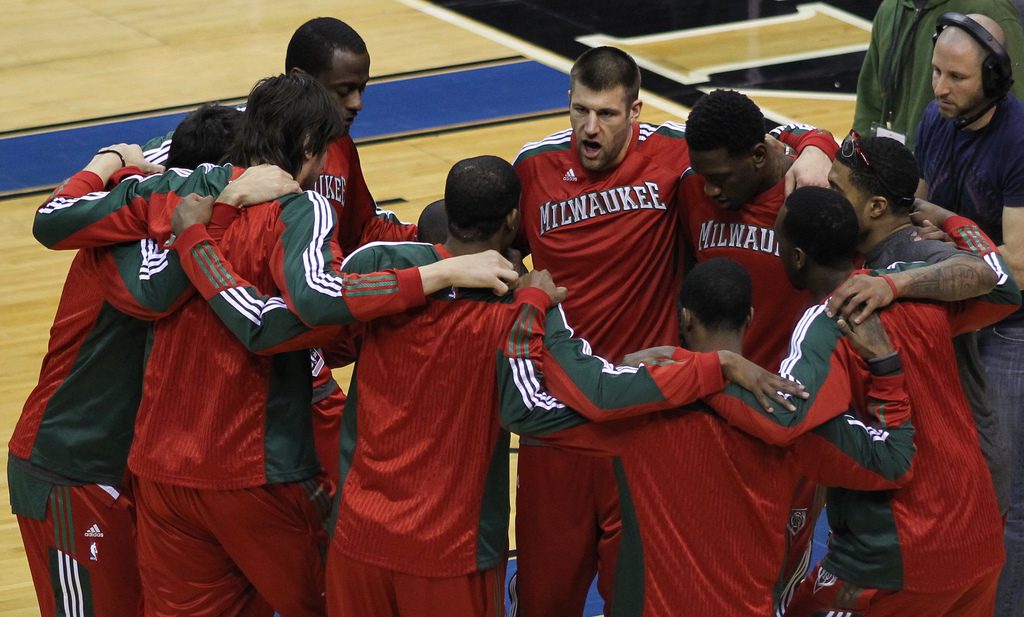 The Milwaukee Bucks are looking to rebound from a forgettable season last year. With a new head coach, a potentially new franchise player, and multiple additions through free agency, the team is wishful that they’ll turn around their fortunes and contend in the East. They also have a management group that hopes a buzz can be created around the city of Milwaukee. With higher expectations and greater talent, here’s a look at the 2014-15 Milwaukee Bucks.

Most Important Player: Jabari Parker
The Bucks need Parker to have a monstrous season. Some rookies rarely play and slowly transition themselves into an NBA rotation. That won’t be the case here. With quality size for his small forward position, numerous scouts believe that Parker is the most NBA ready rookie. His mid-range jumper is polished and his touch around the basket is impressive. He’s also seen as a high character player with a willingness to improve his game. Milwaukee will be relying on him to live up to the hype and create a buzz for the fans. The city of Milwaukee simply needs a star. For the sake of this franchise, it has to be Parker.

X-Factor: O.J. Mayo
Mayo was a massive disappointment last season. Overweight and uninspired, his effort couldn’t have been more questionable. What’s frustrating about Mayo is that he can both shoot and slash when he asserts himself. After a great season for the Mavericks before he joined Milwaukee, the former USC star took a step back with his new team. He’ll have to rediscover his jumper and showcase quality effort if the Bucks are going to have any success. He also needs to develop a consistent rhythm instead of being a feast or famine player. Relying on an unreliable player is unsettling, so perhaps Jason Kidd can help Mayo find his proper form.

Rotations: The starting five should be Brandon Knight, Mayo, Parker, John Henson, and Larry Sanders. New arrivals Kendall Marshall and Jerryd Bayless should be the primary guards coming off the bench. Marshall is a pass first point guard and Bayless can play either guard position. Jared Dudley should offer veteran leadership as he provides a backup role for Parker. The team also has Zaza Pachulia for size and Ersan Ilyasova for instant offense. Ilyasova is a quality player despite his dreadful year last season. He could be a spot starter if he shows perimeter shooting consistency. Giannis Antetokounmpo is considered promising but his game is still a bit of an unknown. He and the lesser known backups will have to prove themselves.

What Needs To Go Right: Jason Kidd needs to have a stronger showing of leadership in Milwaukee than he did in Brooklyn. Under the direction that Milwaukee ownership hope Kidd provides, Parker needs to thrive, Mayo needs to reestablish his game, and Sanders must stay out of legal trouble. The Bucks could also benefit from a decent start to the regular season. Noticeable improvements and the presence of the much hyped Parker could put fans in the seats. Somewhat competitive basketball and fans actually going to the games would give the team an early season shot in the arm. They’ll also have to hope that Kidd refrains from clashing with management, a situation that plagued his brief stint for the Nets.

It’s Really Bad If: Jabari Parker struggles to start the season and Jason Kidd fails to show any shred of coaching ability. The supposed savior struggling and the controversial head coach looking lost would set a negative tone for the year. These two aspects of the Bucks will be their staples and it’s critically important that they pan out from the beginning.

Bold Prediction: John Henson averages two and a half blocks per game. His long arms and effective post defense make him a nuisance for opposing players. If he can stay healthy and increase his minute totals from last season, Henson has a chance to open eyes with his defense. He could be an All-NBA defender who finishes near the top of the league in block totals.

Jerryd Bayless, PG/SG
Strengths: Confidence and a willingness to create his own offense.
Weaknesses: Volume shooter. Undersized defender.
Season Prediction: Bayless will solidify the bench as a vital provider of instant offense. Most of his minutes will come from backing up Mayo.

Jared Dudley, SF
Strengths: Long range shooting ability.
Weaknesses: Limited athleticism. Slow footed in all aspects of the game.
Season Prediction: Dudley will make roughly two triples a game as he shoots 38% from behind the arc. His playoff experience will also help the young Bucks learn something about success at the NBA level.

Damien Inglis, SF
Strengths: Giant frame and long wingspan.
Weaknesses: Unknown if his game translates from France to the NBA level.
Season Prediction: He’ll rarely see the floor. Inglis is definitely a candidate to have some stints with the Bucks D-League affiliate.

Brandon Knight, PG
Strengths: Effective scoring point guard who can attack off the dribble.
Weaknesses: Questionable perimeter shooter. Somewhat weak passer for a point guard.
Season Prediction: Knight will post almost identical stats as last season. With the presence of Parker though, his assist numbers will increase. He also might be forced to work harder with Marshall pushing for minutes behind him.

O.J. Mayo, SG
Strengths: Supreme talent. Experience with starter and bench roles.
Weaknesses: Questionable heart and will to win. Bouts of extreme inconsistency and weight gain.
Season Prediction: Despite being the team’s x-factor, Mayo will slip further down into the rabbit hole. He’ll fail to be the player he was in the past and management will grow tired of his lazy act. Could be traded (if anyone wants him) or released before the season ends.

Khris Middleton, SF/PF
Strengths: Strong shooting ability. Confident in his own shot.
Weaknesses: No defined position. Not big enough to be a power forward, too undersized to be a small forward.
Season Prediction: Middleton will lose minutes to Parker and Dudley. He might also take a backseat if Ilyasova finds his form. Could spend time in the D-League.

Johnny O’Bryant III, PF
Strengths: Large frame. Has the size to defend and be an interior scorer.
Weaknesses: Extremely sloppy and turnover prone. Sometimes blinded by his own desire to score in the paint.
Season Prediction: O’Bryant should receive occasional minutes behind Henson. I don’t see him transitioning well from the SEC to the NBA though because of his sloppiness, which could result in many D-League stints.

Jabari Parker, SF
Strengths: NBA ready body and polished offensive game for his age. Quality mid-range jumper. High character individual.
Weaknesses: Suspect as a defender even at the college level.
Season Prediction: Parker will win Rookie of the Year honors. His scoring average will near 18 points per game. He’ll also see his jersey be a top seller in Milwaukee as he solidifies his status as the face of the franchise.

Nate Wolters, PG
Strengths: Stats don’t show it, but he can score and rebound for his position. Well-rounded game.
Weaknesses: Lacks explosiveness and athleticism. Thin frame.
Season Prediction: Wolters will be buried on the depth chart this year. He won’t see minutes behind Knight and Marshall. D-League candidate.

Chris Wright, SF/PF
Strengths: Athleticism and dunking ability.
Weaknesses: No offensive game aside from routine put back dunks. Undersized for power forward position and not enough perimeter skills to be a small forward.
Season Prediction: Wright shouldn’t even end up on Milwaukee’s roster. With incoming rookies and a couple of free agent additions, he likely won’t be in this organization for long.