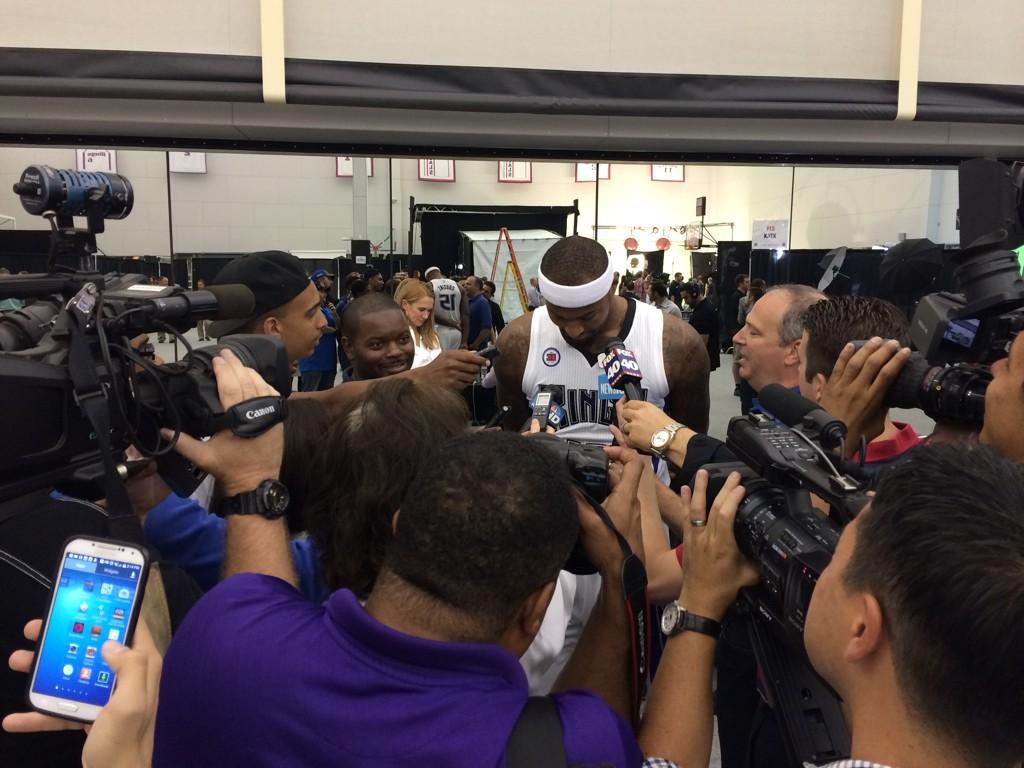 As lengthy and overwhelming as the change in regime has been for the Sacramento Kings, it seems to be falling into place as nothing but hope flooded the team’s media day.

I don’t mean to say that the Kings’ believe they will be a good team this year; they understand that the rebuilding process has only just begun. But one could not deny the fact that everybody from Coach Mike Malone to General Manager Pete D’Alessandro to Majority Owner Vivek Ranadive to DeMarcus Cousins to every single person in the practice facility on media day was full of hope for what would come.

The expectations for the 2014-15 season are minimal on a team-wide basis, but that doesn’t stop management from expecting a little something extra out of its aqcuisitions, and out of both Rudy Gay and DeMarcus Cousins, who are coming off a FIBA world championship and who have been pegged as necessary leaders for the team.

When asked who he expects to step up into a role of leadership for the Kings, Pete D’Alessandro answered “Rudy,” before I finished asking the question. He went on: “He’s been here, he steps in at a much more comfortable position and I think it’ll be much more natural for him. And I also think Darren Collison will step into that role as well, so I think we have three guys who could really lead this team.” (Gay, Collison, and Cousins)

The comment about Gay makes me wonder wether D’Alessandro is referncing his starting small forward in regards to the immediate future, or wether he genuinely believes that he’ll have a spot on this team for years to come. With how aggressive this team’s management has been over the offseason, it may see it as beneficial to try and deal Gay’s enormous contract while it can, in return for another sharpshooter and a pick.

However, no such thoughts came about as the team looked to media day as a sort of stress reliever and a medium to discuss what the upcoming season will hold.

Among one of the players most excited about the prospect of playing another season for the Kings was Omri Casspi, who expressed his homecoming to the team that drafted him and what it means in his eyes.

“It’s exciting; I’m happy [and] it’s a dream come true. This is the place it all started from so I’m happy,” Casspi stated. “I got to have a talk [with Coach Malone] a few times since I’ve been here. We have training camp and I have gotten to know them more and more.”

Just like Casspi, many new faces, or at least faces who weren’t on the Kings for last season, were walking around media day with expectations for themselves and the team. Darren Collison, one of the team’s major offseason acquisitions who has already won a starting role for the Kings, has taken it amongst himself to get to know everyone in the backcourt. The fraternity of the Kings’ guards could already be seen throughout media day, and young players such as Ben McLemore have already taken notice to what Collison brings to the table.

“He’s always there to help us even though he’s learning because it’s a new team for him,” McLemore said. “Just knowing that he’s been in the league for a while; he’s been on playoff teams… it helps a lot for us younger guys.”

The Kings are not necessarily looking to make a push for the playoffs this season, largely because of the fact that it is an unrealistic prospect, especially with how impossible it is for teams to make the postseason in the Western Conference. (See the Pheonix Suns last season, who had an MVP candidate in Goran Dragic and turned around its franchise in one year) Nonetheless, Vivek Ranadive is confident that he and D’Alessandro have made a roster with plenty of room for growth.

“I think its a great roster; a great group of players. [They’re] all healthy, and it fits in with our philosophy of ball-movement, positionless basketball, good defense, fast offense. So we’re very excited to start,” said Ranadive.

For players that don’t know wether or not they will be on the team’s final roster, media day served as a way to express how confident they are in personal abilities and their correlation with this team. One player who has made himself a very real asset to this team, but who doesn’t have a final spot yet, is Eric Moreland. He impressed at summer league, and earned himself the opportunity to take part in training camp with the Kings. Moreland expressed his amazement at the possibility of becoming an NBA player, which he is one step away from doing as the team makes its final personnel decisions.

“It’s been a rollercoaster,” Moreland started. “After I left school it’s been a rollercoaster. I got all those workouts… seventeen workouts and things didn’t work out how I wanted it to, but they [also] kind of did. I had Summer League and tried to played my heart out, and give the Kings what [they] wanted.”

Even the team’s newest asset who carries the biggest burden as far as expectation goes (Nik Stauskas) has expressed his gratitude and comfort he has felt so far with Sacramento. He appreciates and has gotten to know his fellow guards, and is content with the prospect of competing with and playing alongside McLemore. The Kings have said multiple times that the two will be playing on the floor at the same time in many rotations to utilize and expand McLemore’s defensive potential paired with Stauskas’ shooting ability. Stauskas seemed more than on board.

“I think it would be good because we both have a similar skillset. We can both shoot and get to the basket a little bit. We’re both young, and it’ll be an exciting duo if we’re both on the floor at the same time,” Stauskas said.

Regardless of what the Kings’ season is projected to do as far as success goes, it appears that the franchise is more on board with the process of re-constructing the roster for the long term than ever. Excitement surrounds the organization, and will continue into training camp and onward as final roster decisions are made.