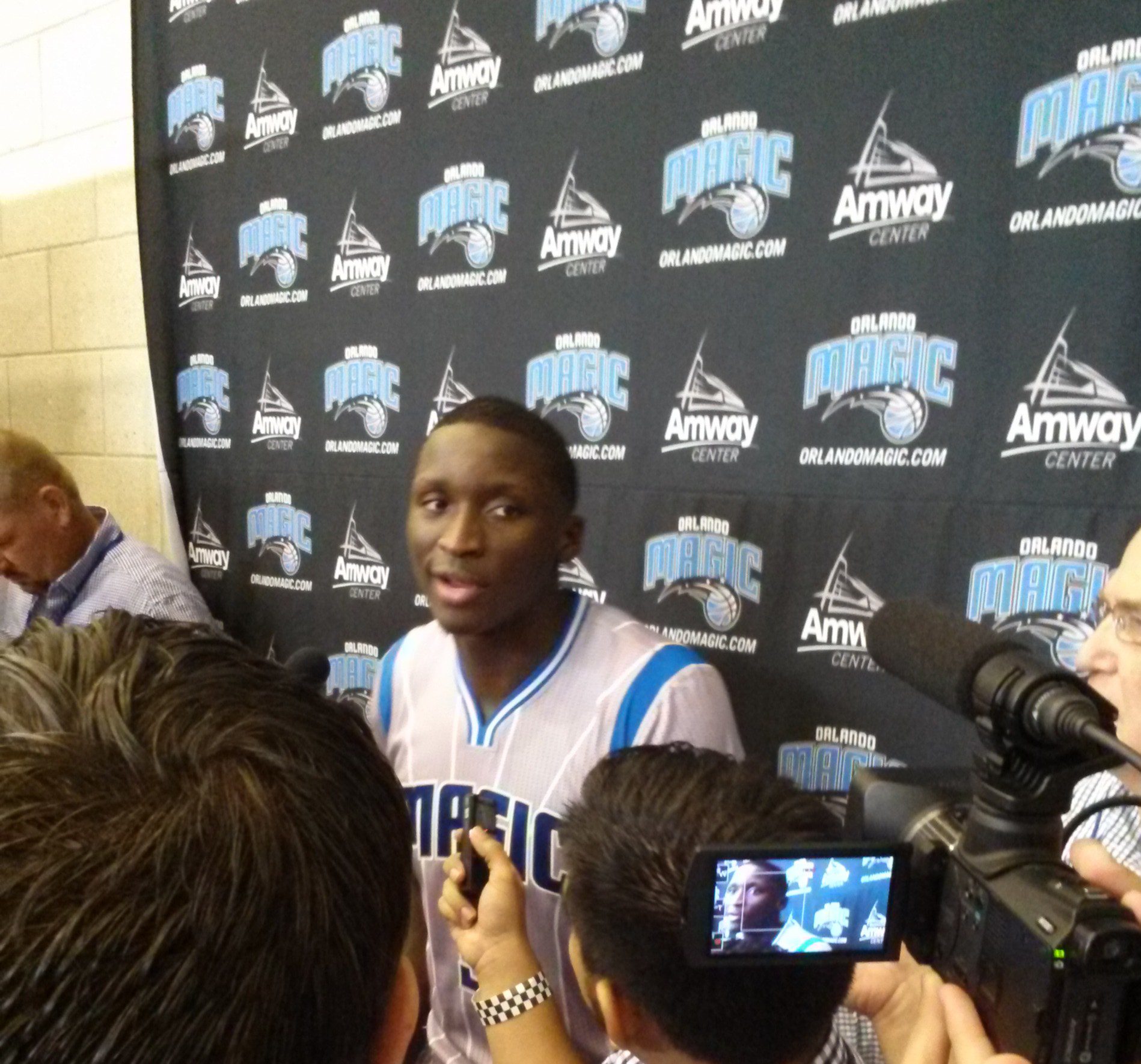 Already in year three of the post-Dwight Howard era, General Manger Rob Hennigan is ready to shift the Magic into a crucial stage of the rebuild. A stage where not only he and the players, but mostly everyone is expecting the Magic to begin it’s ascension from the NBA cellar. One cannot help but be excited for the young talent Hennigan was able to amass over the last few years.

Most Important Player: Victor Oladipo
With the departure of longtime starting point guard in Jameer Nelson, along with last season’s leading scorer in Arron Afflalo, the Orlando Magic officially handed the keys of the franchise to Victor Oladipo. Leading the Magic to big wins against elite teams such as the Oklahoma City Thunder and the Indiana Pacers, look for Victor Oladipo to take the next step as he grows into a leader as well as the face of the franchise.

X-Factor: Evan Fournier
As one of the new faces on the Magic, this do-it-all guard has an opportunity to be what J.J. Redick was to his former team. Coming off a memorable run in the FIBA World Cup, which saw an overmatched France team pull off a huge upset against Spain, Fournier comes to Orlando having gained valuable experience and will seek to be the impact player Rob Hennigan gave Arron Afflalo up for. Look for Fournier to be the team’s stabilizer.

Rotations: A good glance over the roster and one could conclude that Jacque Vaughn will be able to trot out two specific units this season. One being defensive, the other being offensive. Following the departure of Jameer Nelson and Arron Afflalo, the torch has been passed on to Victor Oladipo and the Magic’s talented young core. We could see an opening night lineup of rookie point guard Elfrid Payton, Victor Oladipo, the fourth overall pick in Aaron Gordon, new comer and three-point specialist Channing Frye, and incumbent starting center Nikola Vucevic. The offensive unit could very well be Evan Fournier, Ben Gordon, improved three-point shooter in Maurice Harkless, Tobias Harris, and emerging big man in Kyle O’Quinn. Now the starting lineup could very well end up being completely different and considering the majority of players on the roster can play up to three and guard up to four positions, Jacque Vaughn will have his hands full figuring out the right combinations that could lead to more wins. Where does that leave players like Andrew Nicholson, Roy Devyn Marble, and Dewayne Dedmon?  Fear not, as the Magic formed a hybrid relationship with the Erie Bayhawks, a D-league team. That way, players outside of Luke Ridnour and Willie Greene can spend time developing their skills instead of riding the pine all year long.

What Needs To Go Right: Two things need to go right for the Magic: the young core’s improvement, and their play away from Amway (rhyming accidentally). Last year the Magic had a mantra, “Protect Our House”, and for what it’s worth, they did just that. Posting a 19-22 home record in which we saw victories against teams such as the Oklahoma City Thunder, Indiana Pacers, Los Angeles Clippers, and a two overtime thriller against Carmelo Anthony and the New York Knicks. Unfortunately, the Magic posted their worst away record in franchise history, posting a horrid 4-37 record. If the Magic wants to punch their ticket into the playoffs, not only will the young core will have to show another level of improvement, but they will also have to play well away from Amway as they have at Amway.

It’s Really Bad If: The leaders begin to falter. Jameer Nelson and Arron Afflalo aren’t in the locker room anymore and the stability of the team will now fall on Victor Oladipo, Tobias Harris, and Nikola Vucevic. The front office has faith in the three aforementioned to be the players that will head the franchise into a new era. Although the Magic did pick up respected veterans in Channing Frye, Luke Ridnour and Willie Greene, the Magic will only go as far as Oladipo, Harris, and Vucevic will take them. If those three begin to let the frustrations that come with losing effect them, the season will undoubtedly be lost.

Bold Prediction: The Magic will become this season’s Phoenix Suns. Showing vast improvement on the road while being a formidable home team, the Magic will make a strong push for the playoffs down the stretch, but fall just short .

Dewayne Dedmon, C
Strengths: Athleticism, defense, motor.
Weaknesses: Doesn’t have much of an offense.
Season Prediction: Dedmon will play well enough to hold on to that final roster spot.

Channing Frye, PF/C
Strengths: Floor spacing, three-point shooting, pick-n-pop specialist, durability.
Weaknesses: Athleticism, post-defense.
Season Prediction: Frye will once again become one of the elite three-point shooters in the NBA and his floor spacing will work wonders for his teammates.

Willie Green, SG
Strengths: True professional, intangibles, good shooter, gives 100% effort on defense.
Weaknesses: Doesn’t have much else to offer… on the court anyway.
Season Prediction: Green will be this season’s Ronnie Price. He won’t play much, if at all, but he will have his biggest impact in the locker room.

Maurice Harkless, SF/PF
Strengths: Defensive versatility, improved three-point shot, great in the open court.
Weaknesses: Needs to be more aggressive, free-throw shooting, ball-handling.
Season Prediction: Harkless will carve out his niche as a 3-and-D specialist and will continue to grow as the team’s defensive stopper.

Devyn Marble, SG
Strengths: Jack of all trades.
Weaknesses: Master of none.
Season Prediction: Marble will spend some time and develop in the D-league.

Elfrid Payton, PG
Strengths: Attacking the basket, drive and kick, court vision, defensive versatility, his hair.
Weaknesses: Perimeter shooting, turnovers, loose ball-handling.
Season Prediction: Payton will struggle a bit out the gate, but will turn things around quickly and make a strong push for Rookie of the Year.