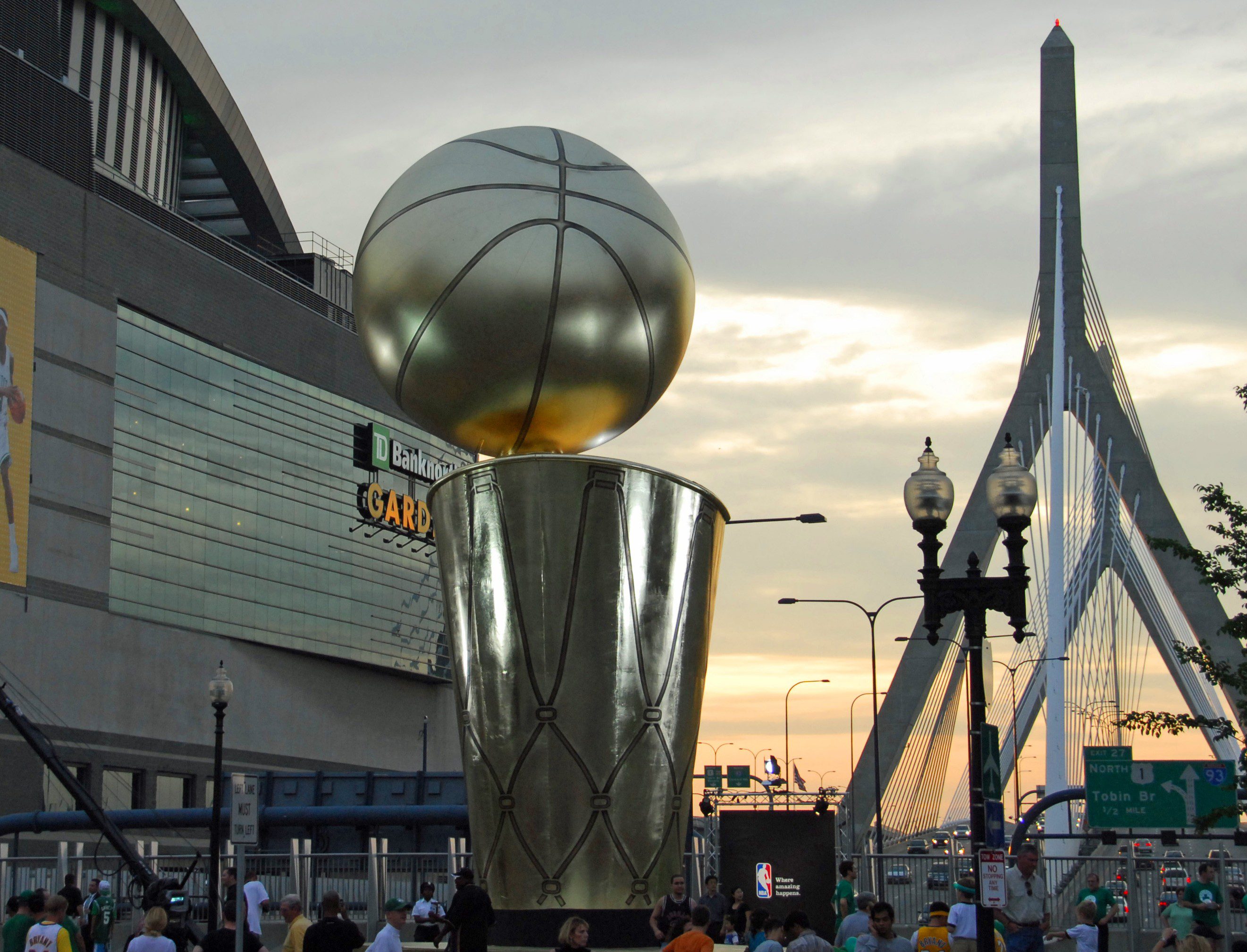 This is the time of year when every team still has hopes of being the last team standing. We’re going to look at the top 10 contenders going into the 2014-15 season.

One has to wonder when the San Antonio Spurs run will eventually end. Are they a team that can make three straight NBA Finals appearances given the age of the big three? It’s inevitable that the Spurs won’t remain on top but they’ve proven time and time again that you can never count this group out. While the offense relies on sharp ball movement and quick decision making, expect Kawhi Leonard to assert himself more as time goes on, relieving the pressure put on Parker and Duncan to generate scoring opportunities. If all goes well, expect the San Antonio Spurs to be right back in the mix for a title run.

On paper this team is legit, but the games have to be played. How this team responds to being under the microscope for the entire season will be key. The only players on this team familiar with dealing with this sort of pressure are the ones with championship experience. How will coach David Blatt handle coaching this team full of stars? Who does David Blatt have taking the last shot with the game on the line? How will Kyrie Irving adjust his game when LeBron is dominating the ball, and vice versa? How will Kevin Love actually be used? There’s no doubt that Cleveland is expecting big things, but especially considering the competition in the (L)Eastern Conference, who’s going to stop them?

3. Oklahoma City Thunder
The Oklahoma City Thunder have been knocking on the door but can’t necessarily break through. Year after year they’ve experienced heartbreaking results in the playoffs. As Kevin Durant and Russell Westbrook look to lead their team to the NBA Finals and bring home a championship, one has to ask what’s going to be different this time?

Oklahoma City has continuously had problems being able to generate easy scoring opportunities. You can’t have Kevin Durant and Russell Westbrook taking turns shooting the ball throughout the course of a playoff series. If Reggie Jackson can come in with an improved game, he can give Scott Brooks another perimeter player to work into the mix that can produce offensively. Oklahoma City will have an offense no longer stagnant and isolation centric (at times). An improved Reggie Jackson will make it easier for Russell Westbrook to slide to the two and allow Jackson to handle the distributing duties. Serge Ibaka and Steven Adams can handle the inside as a scrappy defensive duo. Jeremy Lamb can also look to show he’s a quality sixth man off the bench. The pressure is mounting for this young group to finally come together and get the job done, how will they respond. If they don’t what changes will come as a result (looking at you Scott Brooks)?

4. Los Angeles Clippers
Doc Rivers, Chris Paul, and Blake Griffin will look to enter this season fully focused on basketball. The Donald Sterling madness unfortunately covered up the latter half of the Los Angeles Clippers season. In Game 5 against the Oklahoma City Thunder, Chris Paul and the Clippers blew a seven-point lead in the 49.2 seconds, eventually losing the game and the series to the Oklahoma City Thunder. A season that started off so well had ended like so many others, in defeat.

How talented is this team currently? Many would argue that they don’t have a team capable of winning a championship, let alone winning the Western Conference. Chris Paul isn’t exactly the youngest point guard in the league and they don’t really have the depth championship caliber teams have when it comes to bench play. Look for the Clippers to transition to a team led by the super athletic play of Blake Griffin, but ultimately fall short yet again.

5. Chicago Bulls
The Chicago Bulls are the one team on this list that can be as high as number three and as low as number ten depending on whom you ask. The Bulls are entering this season as the only team in the east capable of contending with Cleveland, but they still have some soul searching of their own to do.

Assuming Derrick Rose can return to the MVP caliber player he was before his ACL injury, that alone still won’t solve the problems this team has. The Chicago Bulls have been searching for a quality shooting guard that can create his own offense since Ben Gordon left. Yes, that Ben Gordon. While Coach Thibodeau is a genius on the defensive end, one can argue his offense needs some work. With the addition of Pau Gasol, Nikolas Mirotic, and Doug McDermott the Chicago Bulls are once again loaded with depth and talent. Coach Thibodeau and Joakim Noah won’t let this team slip; those two alone have put in too much work the past three seasons. Look for Derrick Rose to start the season inconsistent while finding his rhythm after the all-star break. The success of this Chicago Bulls team will hinge on their ability to fix their problems on the offensive end.

6. Dallas Mavericks
The Dallas Mavericks are going to be a team that many people sleep on coming into the 2014-15 season. Truth be told, they went into the playoffs last season as an 8th seed and gave the San Antonio Spurs everything they could handle as that series went the full seven games. Mark Cuban and the Dallas Mavericks have made moves this offseason they think will narrow the gap between them and the rest of the upper echelon team in the west.

Tyson Chandler has been brought in to be the defensive anchor he was when Dallas brought home their first championship. Chandler Parsons will look to fill a similar role with this team that he did with the Houston Rockets, which won’t be hard. Dallas will get stable point guard pay from seasoned veterans in Devin Harris and Jameer Nelson (yes, I know Dallas has Raymond Felton, and I don’t care). Monta Ellis will still be the underrated shooting guard and scorer he always is. Dirk will probably see a dip in various statistical categories but look for Carlisle to manage him similar to how Gregg Popovich manages Tim Duncan. Keep him fresh throughout the regular season because you know what he’s capable of. Don’t sleep on the Dallas Mavericks, they look to be in for a very good season.

7. Golden State Warriors
On paper, this team has some serious ball players. Led by Stephen Curry and Klay Thompson, the sweet shooting duo gives Warrior fans hope that they can eventually make some noise in the west. They got bounced by the Clippers in a back-and-forth seven game series, but they were pretty much missing David Lee.

While the Warriors are a deep team, that depth seemingly betrayed them last season. Andre Igoudala and Harrison Barnes left so much to be desired. Igoudala battled injuries throughout the season after getting off to a hot start and Harrison Barnes just flat out never felt comfortable coming off the bench as the sixth man. Look for those two to turn it around this season. When fully healthy, Bogut and David Lee combine to give the Warriors a mixture of toughness and offensive skill other teams would kill for. Look for Steve Kerr to tinker with some different lineups and possibly have Stephen Curry playing off the ball more than we’re accustomed to seeing. Klay Thompson will prove to be one of the better two-way shooting guards in the game. The Warriors, while fun and exciting, need a lot to go right for them to be in the mix at the end of the season, but we can always hope right?

8. Houston Rockets
James Harden and Dwight Howard are in the going into the second year of their pairing and while they are a good duo, do they have enough outside of these two to actually bring home a trophy? This team currently stands as the fourth or fifth best team in a loaded Western Conference and unfortunately for them, they aren’t climbing the ranks.

Is Patrick Beverley a point guard you can start on a team with championship aspirations? Is Kevin McHale the coach that can lead a team to a championship? How will this team look with Trevor Ariza now that Parsons is gone? When will this team (or James Harden) ever play defense? I’m not going to say they can’t win a championship, but chances are low. Dwight Howard has to take his game to a level we haven’t seen since his Orlando Magic days. Expect the Rockets to be good, but not good enough.

9. Miami Heat
Losing LeBron James hurt. It really, really hurt. You have to believe that Dwyane Wade, Chris Bosh, Erik Spoelstra, and Pat Riley want to make sure they do everything in their power to prove that they are fully capable of winning without LeBron. This team still has championship pedigree and has filled in their team nicely with complementary pieces. They’ve brought in Luol Deng, Danny Granger, and Josh McRoberts to give them some flexibility at the wing positions and in the post.

For Miami, it’s all about Chris Bosh and Dwyane Wade. Can these two revert back to their old ways before they were teammates? Dwyane Wade hasn’t been able to maintain his health, but you know he’s going to feel like he has to carry a heavier load without LeBron James around. As the forgotten man during the big three era, Chris Bosh will look at this as an opportunity to show the league he’s still got it. The sweet shooting big man will be able to showcase his game and prove the doubters wrong. Look for Miami to give the east a little scare; they’ve got the depth and the experience to definitely make some noise.

10. Washington Wizards
Don’t laugh. They’ve got a young core in John Wall and Bradley Beal that combine to make up one of the most athletic backcourts in the league. They’ve got Nene Hilario and Marcin Gortat holding down the paint and give you quality offense. Paul Pierce is going to come in and be the veteran presence the young guys need to learn from. Those things together (with Paul George and the death of the Indiana Pacers) make for an interesting season coming up for Washington. They’re not going to surprise people this year. People actually see this team coming. If Randy Wittman can make sure this team continues to grow and mature, you could be looking at the beginning of something special.