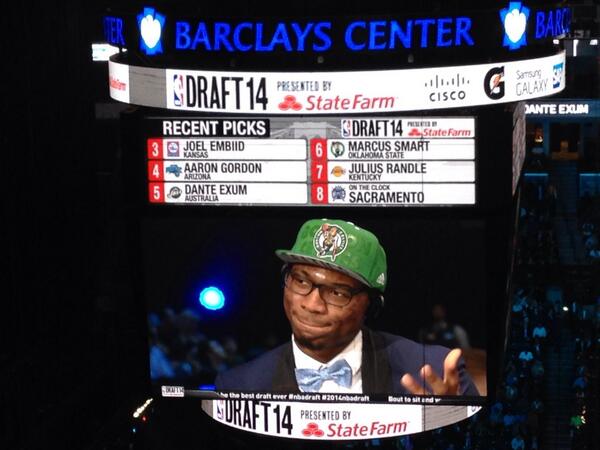 With the brunt of the NBA offseason in the books, Team USA gearing up for international play, and the nation getting reacquainted with the return of the NFL and NCAA football seasons, I’ll be talking about various subjects throughout weeks leading up to the start of NBA training camps. First up, my top 10 NBA rookies to watch for the upcoming 2014-15 season.

The “Best Overall Rookie” of the Las Vegas Summer Summer League (LVSL) displayed a unique offensive skill set when he was on the floor for the Phoenix Suns. With floaters and an array of moves at the basket, Warren averaged 17.8 points and 4.8 rebounds a game in five contests. He’s shown he can score the ball efficiently, too, making 37 of 68 shots total. He isn’t a knockdown shooter from distance—he missed all four of his attempts from deep—but it shouldn’t be too much of a concern given that he’s an excellent mid-range shooter. Warren should be higher on this list, but he’s behind the Morris twins and P.J. Tucker on the depth chart. He’ll have his work cut out for him, but if his production in the summer league can translate to the season, Jeff Hornacek will have another good option in his high-octane offense.

Marcus Smart is built like a tank. Standing at 6’3″ and 227 pounds, Smart will have no trouble holding his own on the defensive end of the floor. He’s also one of the few guards in the league who can make plays in the post as well, a trait that will be useful when he goes up against smaller NBA guards. His Achilles heel right now is his shooting. Although he averaged 14.8 points, 4.2 rebounds, 4.2 assists, and 2.0 steals in the Orlando Summer League (OSL), he shot a poor .294 percent from the floor. Good thing for Smart is that he won’t have to be asked to carry the scoring load for Boston. He has the ability to impact the game in a variety of ways and Brad Stevens will put him in various situations to succeed off the bench until the team decides to part ways with their incumbent starter, Rajon Rondo.

Mitch McGary played well in his summer league debut, averaging 14.8 points, 5.8 rebounds, and 1.8 blocks per game on .500 percent shooting on the floor. He’s looking to be back to his former self, doing a little bit of everything from knocking down jumpers, stonewalling opponents at the rim, and dominating the game with his tenacity and hustle. He’ll undoubtedly push for a spot in Scott Brooks’ rotation and bring an extra edge to the Thunder roster. While his senior teammate, Steven Adams, has a year of experience under his belt, it’s things that he won’t be able to do at this point in his career that McGary can already do. They may end up forming one of the league’s most tenacious frontcourts if Adams and McGary continue to improve.

Julius Randle is one of the most physically imposing rookies of the 2014 class. While his summer league averages don’t necessarily jump out at you (12.5 points, 4.3 rebounds), he does many things that don’t show up in the stat sheet, from terrorizing his opponents on the glass with his relentless hustle, to impacting the other team by getting their bigs in foul trouble. Randle was also able to display his court vision and ball handling by bringing the ball up court and sometimes finding his running mate, Jordan Clarkson, spotting up on the perimeter. However, recent acquisitions made by the Los Angeles Lakers such as claiming Carlos Boozer from waivers, signing Ed Davis, and bringing back Jordan Hill made the power forward spot a little crowded. If Randle can improve his outside shooting and become a better shot blocker, don’t be surprised if he’s included in Rookie of the Year conversations.

The Australian Man of Mystery had a very ho hum summer league debut, putting up averages of 7.2 points, 2.6 rebounds, and 2.8 assists on .301 percent shooting from the floor. With that being said, Exum is going to be an exciting player to watch this season. A pass-first point guard with a deadly quick first step and the length to see the court in ways not many point guards in the league can, Exum has the tools to excel in this league. Like with many prospects in this class, the young man has to improve his shooting. He also has to get in NBA shape if he wants to succeed as there were times throughout the summer league when he was simply gassed. There are questions about whether or not he can play off-ball next to Trey Burke. We already saw flashes of brilliance when he has the ball in his hands, but if he can figure out to play off-ball, we may have a player who can challenge for and possibly win Rookie of the Year.

This may come as a surprise to some considering where I have Dante Exum ranked, but this big time collegiate star from a small time mid-major may be this year’s Damian Lillard. Payton struggled mightily in his first summer league game, but would shake off those jitters and go on to have an impressive summer league. Averaging 9.2 points, 5.2 rebounds, and 7.0 assists on .593 percent shooting from the floor, Payton showed many why the Magic decided to pass on Dante Exum and give up assets for him. He has great court vision and is right up there with Marcus Smart as an elite defender for his position. He’s also very adept at gashing teams in the lane, hence his high shooting percentage for a point guard. It is also worth mentioning that he came close to putting up two triple-doubles and led the OSL in assists. But he does come with some knocks. Payton has to become a better shooter as teams won’t allow him to make a living in the paint knowing he can’t hit the broadside of a barn from distance. He also has a bit of a loose handle, but those are things that can be corrected. It’ll be some time before he’s officially handed the keys to the team, but once he is, remember the name: Elfrid Payton.

Before I talk about McDermott, let me curse the Denver Nuggets for passing on him and denying the world of Dougie McNuggets. This young man is a baller. Plain and simple. Putting up 18.0 points, 4.0 rebounds, and 2.8 assists on .442 percent shooting in summer league, he showed he can torch teams from the perimeter and he can kill teams in the paint. He’s also surprisingly athletic, something many people had doubts about. His defense isn’t there yet, but he will be going to one of the best defensive teams in the entire league, spearheaded by one of the brilliant defensive minds of the league in Tom Thibodeau. While there are legitimate questions about his true position in the NBA, McDermott has the talent to thrive in this league. Many pegged him to win Rookie of the Year to begin with, but even if he doesn’t, he’s one of those players that will last 10-plus seasons in the NBA.

Andrew Wiggins may be in limbo at the moment, but he is a player who may jump to No. 1 if and when the trade for Kevin Love goes down. He averaged 15.5 points and 3.5 rebounds in summer league. Many have compared him to Tracy McGrady, but of his 0.3 assists per game is any indication, he’ll probably never be as good a facilitator as T-Mac back in his heyday. That doesn’t take away the fact that he’s the most athletically gifted human being to lace up since, well, LeBron James as a young buck. One of the knocks against Wiggins is his penchant to fade into the background or through the motions during games. Not to worry, as he has shown on a few occasions that he can be assertive and carry a team on his back. That will most certainly be the case once he’s dealt, but let’s not forget he’ll be playing with Ricky Rubio, one of the elite pure point guards of the league. He might not have Joel Embiid as a teammate, but I’m sure he’ll be happy with Nikola Pekovic and Gorgui Dieng.

Jabari Parker is as elite as it gets. His offensive game is probably only rivaled by Doug McDermott as he averaged 15.6 points and 8.2 rebounds per game. He’s also an NBA offseason training regimen away from beginning to scratch his athletic potential. He has a great mid-range game, can kill it from deep, and is very capable on the post. He doesn’t have the video game athleticism that Andrew Wiggins possesses, but not many people on earth do. That being said, Parker does have his shortcomings, particularly on the defensive end of the floor. That won’t matter if Parker starts fulling his destiny of superstardom in the NBA, and believe me, his talent suggests that he will reach that plateau. Just don’t expect Parker to become a two-way player.

You read that right. Nerlens Noel is my top rookie to watch the 2014-15 season. Noel may have been drafted in 2013, but since he missed the entire season due to recovery from tearing his ACL, he gets the Blake Griffin treatment. Noel made his much anticipated debut in the OSL and did not disappoint. He averaged 13.7 points, 5.7 rebounds, and 3 blocks per game on .520 percent shooting. What’s most impressive about that stat line is the three blocks. The way he played on the defensive end, it really feels like he averaged more. Noel was a real game changer on that end of the floor, making life difficult for opposing players to get shots off from close-range. He also showed off how nimble he can be, wreaking havoc in the passing lanes and sometimes even taking it all the way to the hoop off steals. He’ll be the big man on campus until Joel Embiid heals 100 percent and takes some of the spotlight away in the City of Brotherly Love, but if there isn’t any other reason to watch Nerlens Noel, watch him for his majestic flat top. It’s really a sight to see.