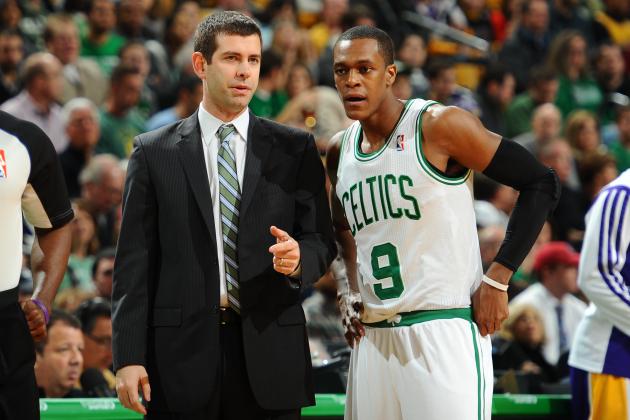 Boston Celtics All-Star point guard Rajon Rondo is expected to miss 6-8 weeks as he recovers from surgery to repair a broken finger. Prior to this news Rondo was a prime candidate to put in a bounce-back season this 2014-15. Opening night is four weeks away, so how should this unfortunate turn of events affect Rondo’s rankings going into fantasy basketball draft night?

Off the top, it is never a good sign when a player has to miss all of training camp, let alone the preseason and the first couple of weeks of the regular season. Prior to any adjustments Yahoo has his O-rank pegged at 32, which has him going off the board in the third round of most standard sized leagues. The Celtics play a total of 12 games across the first four weeks of the season. That means, assuming Rondo does not experience any setbacks during his recovery he will miss anywhere between 6-12 games at the minimum this season. That’s not a good projection from a potential third-round pick, by any stretch of the imagination.

When healthy though, Rajon has proven that he is capable of being a Top-5 assist producer as well as an excellent source of steals for fantasy teams. Add to that his better than average field-goal percentage and rebounding numbers among point guards and you’ve got yourself a solid second tier PG. Again, that’s when he’s healthy.

Rondo should be bumped down rankings by a reasonable amount, making him a calculated risk between the fifth or sixth rounds. Now here is where a dilemma rears its ugly head. If the draft system being useed does not adjust the rankings, an absentee manager on draft night will likely find himself as the not-so-proud owner of an early autopicked Rajon Rondo. Regardless, the situation should not tempt you in rolling the dice. It’s been a while since he’s played 70 games or more. We’re talking way back in 2009-10. Yes, that long. Considering he’s averaged just 48 games played over the last four seasons, he should be labeled as an injury-prone player. Bottomline, gamble on him in the middle rounds at your own risk. You’ve been warned.