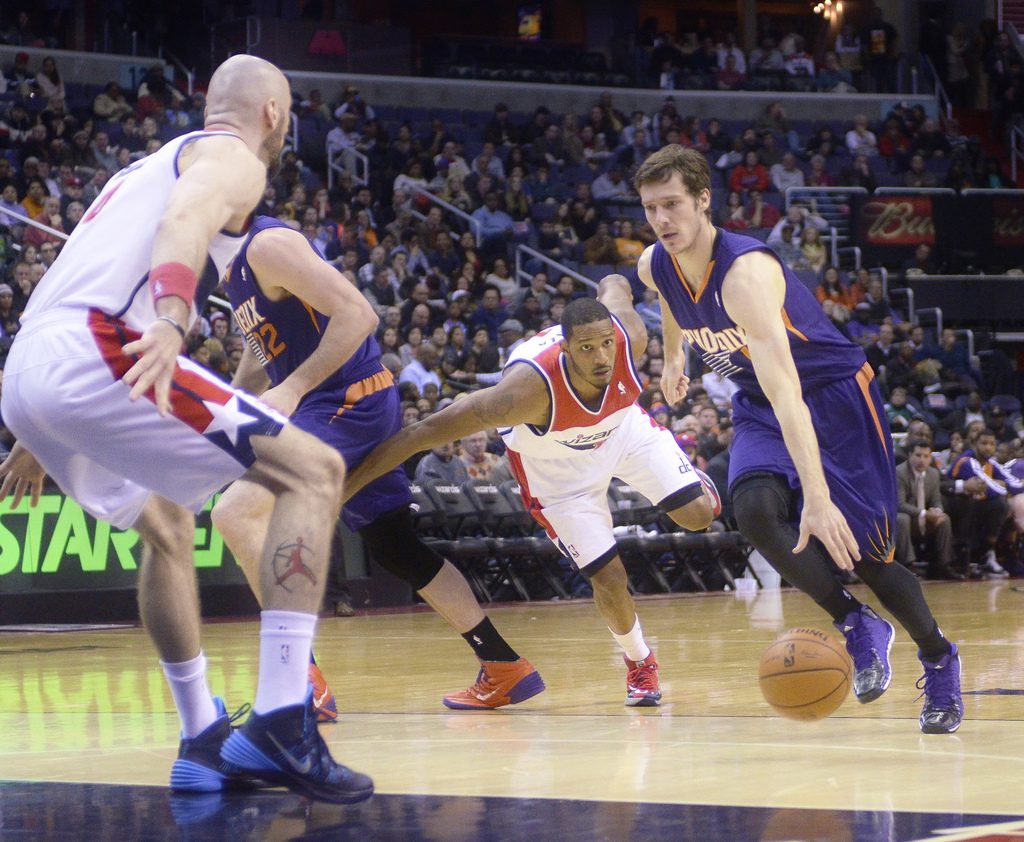 Last season was one of breakouts for the Phoenix Suns. The team broke out after being projected as bottom feeders, and players of all sizes— Goran Dragic, Eric Bledsoe, Miles Plumlee, the Morris twins—stepped up their games to contribute. After missing out on the playoffs in a 48-win season, the Suns are eager to make the the postseason in 2014-15.

Most Important Player: Goran Dragic
The Dragon will continue to bring the flames in the Valley of the Sun next season. After a monster performance this summer at the FIBA World Cup, Dragic is ready to build on his breakout season.

X-Factor: Alex Len
Someone on the Phoenix Suns has to be big. With Channing Frye gone, Len may get an opportunity to improve by simply existing and being an active body.

Rotations: Ideally, Phoenix wants to go with a three point guard rotation of Dragic, Isaiah Thomas, and Bledsoe, with Dragic and Bledsoe starting. Miles “How come I didn’t get invited to the World Cup” Plumlee will be the athletic big in the middle and both Morris twins may start (which is the sneakiest unfair advantage in the NBA), but P.J. Tucker will likely begin the season as the starting small forward. Gerald Green will provide the offense and defense on the wings, while first-round pick T.J. Warren will hopefully provide both.

What Needs to Go Right: Someone in the stacked West needs to get the injury bug, have a chemistry issue, or get swept into an inter-dimensional vortex, because it looks like 50 wins will be the barometer once again for a playoff invite, and Phoenix isn’t quite there.

Bold Predictions: An Eric Bledsoe trade could spark the Suns into the playoffs. While the musclebound guard is dynamic, getting frontcourt help could balance Phoenix’s guard-heavy attack.

Eric Bledsoe, PG
Strengths: Strength.
Weaknesses: Sometimes out of control, reluctant to shoot on the perimeter.
Season Prediction: Given an injury free campaign, Bledsoe should wreak havoc going to the basket.

Goran Dragic, PG
Strengths: Unstoppable heading toward the basket.
Weaknesses: Although a great play maker, he sometimes suffers from tunnel vision.
Season Prediction: Dragic will make the 2015 NBA All-Star game and possibly an All NBA team.

Miles Plumlee, C
Strengths: Shot blocking, finishing at the basket.
Weaknesses: Offensive arsenal. Rebounding.
Season Prediction: Plumlee will start at the 5 again for Phoenix, but his garbage man game will suffer without Channing Frye pulling opposing bigs from the paint.

Shavlik Randolph, PF
Strengths: Being from Duke.
Weaknesses: Offense.
Season Prediction: Randolph will be another veteran body and six fouls.

Isaiah Thomas, PG
Strengths: Can score from anywhere, is simply too small to guard.
Weaknesses: Is a major defensive liability.
Season Prediction: IT will keep his stats up in the Suns’ high tempo offense and win the Sixth Man Award.

Anthony Tolliver, PF
Strengths: Veteran presence in the frontcourt.
Weaknesses: Provides limited offense.
Season Prediction: Although the Suns use nontraditional minutes, Tolliver may see minutes as Phoenix is thin at 4 after the Morris bros.

P.J. Tucker, SF
Strengths: Is the Suns’ lone defensive stopper.
Weaknesses: Tucker’s shooting leaves much to be desired.
Season Prediction: Tucker will see plenty of minutes against teams that slow the Suns into defensive battles.