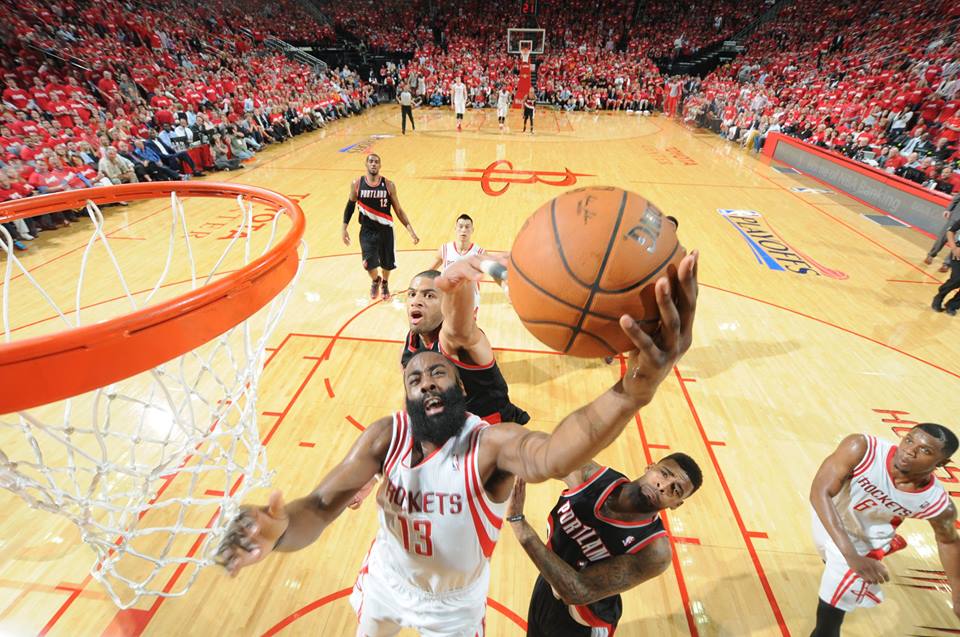 Image courtesy of the Houston Rockets/Facebook.

It was a busy summer for the Houston Rockets, as the offseason forced Rockets fans to endure nearly every emotion under the sun. While the early-summer dumpings of Omer Asik and Jeremy Lin helped clear space and build excitement that a Chris Bosh addition was on the verge of realization, a (seemingly) last second offer from Miami to Bosh kept the big man in Miami and all but dashed the Rockets’ hopes of a super-lineup. As a result of this aforementioned disappointment, Houston also chose not to match Chandler Parsons‘ contract. This allowed Parsons to sign with the in-state rival Dallas Mavericks and help create one of the most interesting ex-boyfriend drama storylines of the upcoming 2014-15 NBA season.

Most Important Player: James Harden
Perhaps a no-brainer to anybody who watches the Rockets—the team’s future success rests on the beard of one the league’s most polarizing figures. At his best, Harden is an elite scorer who can dictate the pace of the game on the offensive end by embracing drawn-out iso sets on offense and drawing an exorbitant amount of fouls, or speed up the pace of the game by draining head-scratching pull-up threes at the beginning of possessions. At his worst, Harden is a black hole who, when not drawing fouls, has trouble getting the rest of his team involved and couples that inability with questionable effort on defense.

It is impossible to ignore Hardens #2 ranking in free-throw attempts per game (9.1) and it is likely that he builds upon his 25.1 PPG last year (which was good for fifth in the league) as the Rockets will be hard-pressed to find consistent offensive production from their bench this season. But if the Rockets really want to make a splash in a hyper-competitive Western Conference, then Harden will need to improve in areas of his game that aren’t related to scoring. The Rockets will improve if Harden’s defensive effort and cohesion with ALL of his teammates improve—a big if at this point, but not impossible for the 25-year-old NBA All-Star.

X-Factor: Donatas Motiejunas
D-Mo finally found a way into the news this summer… sadly, it wasn’t for anything on the court though. Following an interview with the Lithuanian media, it came to light that Motiejunas stated that Dwight Howard and James Harden don’t eat meals with the rest of the team very often. While this seems like an innocent enough remark (especially because it referenced their meal choices rather than their lack of desire for companionship), it somehow blew up thanks to the extreme attention devoted to the Rockets organization this summer.

Now that the gossip phase of the offseason has passed, it is time for Motiejunas to remain relevant to casual NBA fans. This will take a level of consistency previously unseen from the third-year big man. Kevin McHale seems to have at least partially recognized his poor handling of Motiejunas in past seasons, and has made it known that the starting power forward position is an open battle at this point in the preseason. While it is unlikely that Motiejunas shows enough to snatch the spot from incumbent starter Terrence Jones, his confidence on offense has looked greatly-improved so far this preseason. If Motiejunas is able to combine his much-talked-about post game with a steady outside shot, there is no reason for him not to see a huge jump in minutes—something that could help solve the Rockets expected lack of bench scoring.

The bench isn’t as easy to figure out, however. Thanks to some surprising preseason performances from Ish Smith and Tarik Black, the Rockets have a few difficult decisions to make that will help to shape their bench this season.

Add in Jason Terry when the bench squad desperately needs scoring, second-round pick Nick Johnson in blowouts, and Isaiah Canaan when Ish Smith struggles, and that is the most-likely group of Rockets reserves.

What is easy to decipher from these lineups is the obvious lack of proven players and a hole behind Dwight Howard. McHale will definitely have his work cut out for him this season as he works to create effective reserve lineups with the scraps that he has been given.

What Needs To Go Right: Harden and Howard need to stay healthy, out of foul trouble, and play up to their top-10 ability. Trevor Ariza needs to take advantage of the good looks he will get as a result of increased defensive pressure on the two aforementioned stars, and shoot like contract-year Trevor. One of the previously-unknown bench players needs to break out and ensure that the second unit won’t go long stretches without scoring. Last but not least, Kevin McHale needs to implement an offense that is a bit more complex than “James, do something.”

It’s Really Bad If: Rockets fans are unable to find a replacement for Jeremy Lin’s scoring off the bench, as well as a scapegoat to replace Lin during losses.

Bold Prediction: The Rockets struggle for the early-part of the season and look to be outside of the playoffs… until Harden and Howard start playing 44 minutes per-game after the All-Star Break and put the team on their back, catapulting the Rockets right back into the middle of the deep Western Conference.

Trevor Ariza, SF
Strengths: Athletic defender who can get in passing lanes and make opposing wing players work more than they’d like to.
Weaknesses: Playing well in non-contract years, staying on one team.
Season Prediction: A letdown from last year’s shooting in Washington. The 40.7 percent Ariza shot from deep last year was six percent higher than his career average—expect something closer to his 34.7 percent career rate.

Patrick Beverley, PG
Strengths: Defense, pestering opponents, pissing off opposing fans.
Weaknesses: Offensive playmaking ability is highly lacking for a starting point guard.
Season Prediction: Beverley continues to play defense at an above-average level, but leaves much to be desired on the offensive end that will have the Rockets looking for guard scoring by midseason.

Isaiah Canaan, PG
Strengths: Shooting, scoring, pick-and-pop offense.
Weaknesses: Passing, lacks size which makes him an ineffective defender, playing with teammates.
Season Prediction: Many had Canaan pegged as the Rockets backup point after a solid summer league showing, but his inability as a passer will limit his minutes as long as Ish Smith continues to surprise. Canaan could be on the way out of Houston soon.

Clint Capela, PF
Strengths: Athleticism, potential.
Weaknesses: Lacks strength to actually play the center position in the NBA, despite his 6’11 frame.
Season Prediction: D-League assignment and a few minutes to showcase him for any teams interested in a trade.

Joey Dorsey, PF/C
Strengths: Rebounding, aggressive defense, tenacious loose-ball gobbler.
Weaknesses: Undersized.
Season Prediction: If he survives the cuts, Dorsey will be called upon for rebounding off the bench and not much else.

Francisco Garcia, SG/SF
Strengths: Shooting, experience, mean mugging.
Weaknesses: Athleticism, consistency.
Season Prediction: If Garcia makes the final cuts, expect to see him used as a shooting spark off the bench whenever the team is struggling for points.

James Harden, SG
Strengths: Beard, drawing whistles, making those shots where fans are like “nonononono…yes!”
Weaknesses: Defensive effort, unable to fight urge to pass to a heavily-defended teammate with three seconds on the shot clock.
Season Prediction: A lot of free throws, a lot of frustration, but a jump in scoring regardless.

Dwight Howard, C
Strengths: Manhandling men, shoulder workouts.
Weaknesses: Leg day, free throws, killer instinct.
Season Prediction: Dwight was perhaps the most encouraging piece of the Rockets’ season last year—especially in the playoffs. Much of the maturity questions that plagued Dwight during his time in LA seem to have been resolved, and Howard made a point of letting his game do the talking for him. A similar season should be seen in 2014-15, though not quite to the level of his Orlando Magic dominance.

Nick Johnson, SG
Strengths: The ability to score—both at the rim and from jumpers, fast breaks.
Weaknesses: Size. Johnson just doesn’t have the size to matchup with many other shooting guards, and doesn’t have the mentality to play point guard for extended stretches.
Season Prediction: D-League All-Star with a few highlight-worthy dunks during NBA garbage time.

Terrence Jones, PF
Strengths: Athleticism at the 4 spot, ability to take defenders of the dribble.
Weaknesses: Relies on athleticism too often at times, and probably shouldn’t try to take his man off the dribble as often as he does.
Season Prediction: The competition versus Motiejunas pushes T-Jones to play more controlled and efficiently, and a solid improvement from last year is made.

Donatas Motiejunas, C
Strengths: An underrated post game that most people are unaware of due to McHale’s preference for camping D-Mo on the three-point line.
Weaknesses: Consistency, positioning on both offense and defense.
Season Prediction: This is the year where D-Mo finally strings a few solid weeks together and proves that he is capable of playing time on a playoff team. If the lineups he is a part of enable him to post up opponents’ bench bigs, expect an increase in efficiency and a handful of beautiful finishes throughout the year.

Kostas Papanikolaou, SF/PF
Strengths: Shooting, awkward-looking, but effective drives, length, no conscience.
Weaknesses: Athleticism is a little low for a small forward, no conscience.
Season Prediction: A ton of hilarious mispronunciations from opposing announcers, and a ton of big shots off the bench. Kosta Pap looks to be the modern-day Bostjan Nachbar.

Ish Smith, PG
Strengths: Passing, ability to get into the paint, non-stop motor.
Weaknesses: His size, outside shooting (15-for-69 for 22 percent from three in 191 career NBA games).
Season Prediction: Ish was brought in with a chance to earn minutes in the point guard rotation, and if the preseason games so far have been any indication, Ish will have a good share of those minutes. His ability to get others involved by driving and dishing will be extremely important with the Rockets roster of shooters. Expect Ish to be a solid pass-first player, and the first PG off the bench to start the season.

Jason Terry, PG/SG
Strengths: Staying in the league, airplane impersonations, wearing a headband, scoring.
Weaknesses: Age is beginning to show.
Season Prediction: Terry, who turned 37 last month, was a non-factor in the league last year and will need to prove that he can still contribute. Outside of a few solid scoring games, he may have trouble contributing as much as Rockets fans hope.