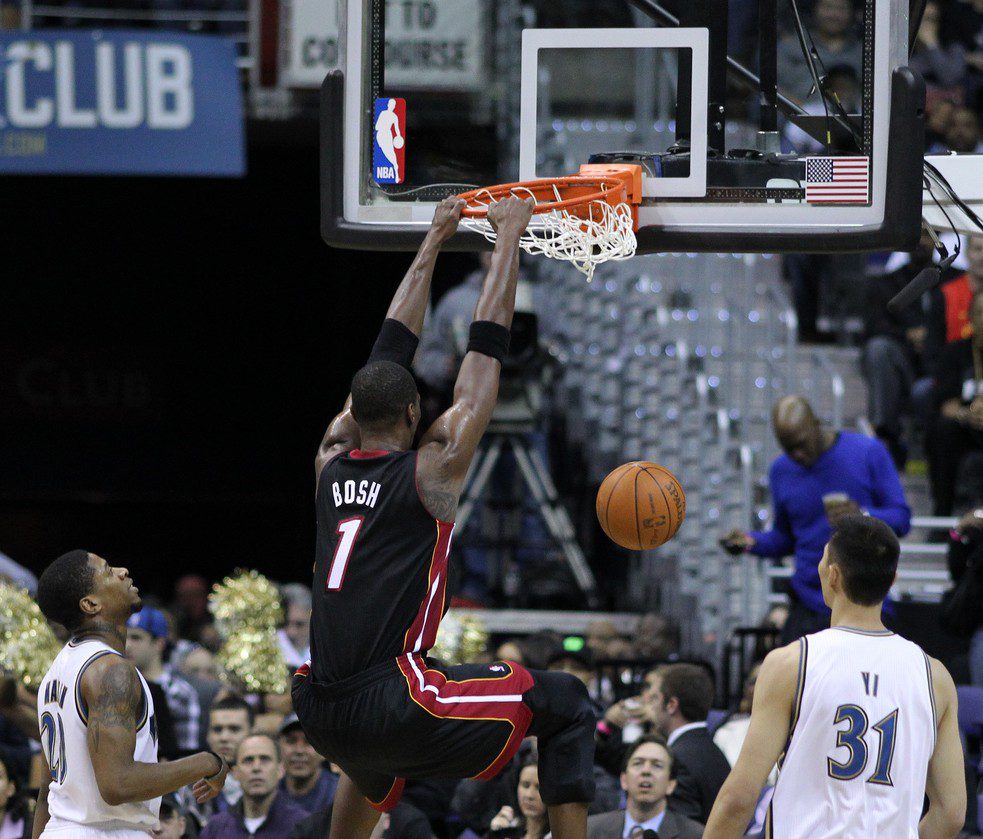 The Baller Mind Frame Staff got together and gave their thoughts on the various NBA divisions as part of our NBA Season Preview. Here’s what we think about the Southeast Division.

KEN GRACE: There are a number of guys who could claim the spot but Miami Heat forward, Chris Bosh is the most important player in this division. Regardless of the responsibility Dwayne Wade made feel to help the Heat remain in the title conversation, Miami will go as Chris Bosh goes. Wade is going to have nights where he simply is not going to have much to offer, which is why night in and night out Bosh is going to have to bring it if the Heat plan on repeating as division champions.

DAN RAKES: Chris Bosh. Since joining the Miami Heat, Bosh willfully accepted his role as the third option. With the departure of Lebron James to the Cleveland Cavaliers and Dwyane Wade’s health in question, Chris Bosh is now the best player on the Heat’s roster and the Southeast Division. In order to finish toward the top of the Eastern Conference the Heat will need Bosh to become the primary option. Over the past three seasons Bosh has become a good defender and has added the three-point shot to his game. Look for Bosh to return to averaging over 20 points and 10 rebounds per game as he did with the Toronto Raptors. Bosh hasn’t missed many games throughout his career, but if he gets injured the Heat could have a disappointing season. Until Miami can figure out how to fill the huge gap left by James, Bosh will be the player that they rely on the most.

AARON LANTON: This is the season we will learn if John Wall has the gumption to become a superstar player. The Washington Wizards are posed to win the division this year, but will fall short of reasonable expectations unless Wall steps his game up. He showed considerable improvement in his long range shooting percentages last season, and also played in all 82 games which is a good sign considering his prior health issues. The Wizards have the best mix of talent and youth in the division, but they don’t have a player who can show up every night and dominate. Wall has the potential to be a perennial basketball force, but he’s not there yet. 2014-15 is the season to show and prove.

GRACE: He was a wild card with the Indiana Pacers and now the newest Charlotte Bobcat, Lance Stephenson is the top x-factor in the Southeast. Stephenson can play but you never know what you’re going to get from him. Last season, Charlotte was able to secure the seven slot in the Eastern conference, upon which they were manhandled by the Heat. Imagine how interesting things could have been had the Bobcats had Stephenson on their roster? With a chance to truly shine and access to Michael Jordan, Lance Stephenson could shake things up in this division and have Charlotte sitting pretty by season’s end.

RAKES: At Age 36, Paul Pierce is nearing the end of his great NBA career. With the departure of Trevor Ariza the Wizards will need Pierce not only to play well but also provide veteran leadership. Otto Porter is the small forward of the future for the Wizards, but while Porter is still developing into a quality NBA player, the Wizards will need Pierce to produce. If Pierce can stay healthy and have a good season, the Wizards could win the division and finish in the top 4 in the Eastern Conference. If Pierce can’t stay healthy and doesn’t have a good year, the small forward position could be an enigma for the Wizards this season and have a negative effect on their playoff seed.

LANTON: Lance Stephenson. The Indiana Pacers lost their hold of Lance Stephenson at some point last season which led to a lot of acting out, and really, really odd tactics to frustrate opponents.

Those antics led to Stephenson losing millions, maybe tens of millions, during free agency, fair or unfair. The Charlotte Hornets aren’t concerned about Stephenson acting out of line since Michael Jordan is around to police any potential concerns. The reality is that Born Ready could be the best player in the division if he can focus. The Pacers leaned on him for everything on offense and he delivered. Additionally, he’s a very good perimeter defender, and probably the best rebounding guard in the league. This is his first role as a full-time starter. We should expect big things from the Brooklyn native.

GRACE: The Orlando Magic could surprise everybody and be competitive but that probably won’t happen. The real surprise in this division would be if the Washington Wizards ran away with the division, which they very well could. The Wizards match-up well with every team in their division and also possess the best backcourt in the division in John Wall and Bradley Beal.

RAKES: The Charlotte Hornets are the surprise team in the Eastern Conference this season. Last season we saw the Toronto Raptors and the Washington Wizards surprising everyone and playing well in the playoffs. The Hornets will be that team this year. With the addition of Lance Stephenson who is an All-Star caliber player with significant playoff experience and the core of the team returning from last year, the Hornets are in a position to take the next step. They will surprise the NBA and play the Cleveland Cavaliers for the Eastern Conference title next May.

LANTON: Miami Heat. If the Wizards and Hornets don’t come together quickly, the Heat will win the division by default. This is not a bad team and it’s not a great team. The Heat will win at least 50 games on guile and talent alone. Despite his decreased per game numbers, Chris Bosh has improved several facets of his game since leaving the Toronto Raptors. He could easily become a 20-10 guy again with LeBron not around to take away shot attempts and regulate Bosh to a position outside of the paint. Wade is anticipated to have a more healthy season, and the addition of Luol Deng will alleviate the loss of the prolific talent that is LeBron James.

The Heat aren’t really built for the regular season, but they could be serious trouble for any Eastern Conference team in the playoffs. This team will easily make the playoffs, but they won’t care what seed they have. All the Heat want is LeBron James in the playoffs. You can take that to the bank.

GRACE: The Atlanta Hawks win the Southeast division behind a healthy Al Horford. Last season, before Horford sustained a season ending injury, the Hawks were the third best team in the East and second to the Miami Heat with in the division. After losing Horford, the Hawks continued to be hit with the injury bug but still managed to get into the playoffs and push the top-seeded Pacers to seven games. If the Hawks can stay healthy and with no LeBron to contend with, the Hawks could surprise everyone and win the division.

RAKES: The Miami Heat finish in third place in the division. The Heat have won the Southeast Division four straight years, this will be the year their streak is broken. Losing Lebron James is a huge blow to the Heat. They have added Loul Deng, Josh McRoberts and Danny Granger to try to fill the void left by James. Heading into this season they are no longer head and shoulders above the other four teams in the division. With the Wizards and Hornets on the rise I expect them to finish as the top two teams in the division. With Dwyane Wade, Deng and Granger all having health issues the past two seasons, the Heat won’t be able to fully rely on them being able to help the team win their fifth straight division title.

LANTON: The Washington Wizards will fall below expectations. Paul Pierce’s two-year deal with the Wizards will be seen as a failure once he is unable to play well on a consistent basis. Otto Porter Jr. will remain ineffective because Randy Wittman won’t give him minutes and won’t explain why. The injuries issues that plagued Nene and Gortat flair back up which leaves an overmatched John Wall and Bradley Beal unable to keep the Wizards at the top of the division.