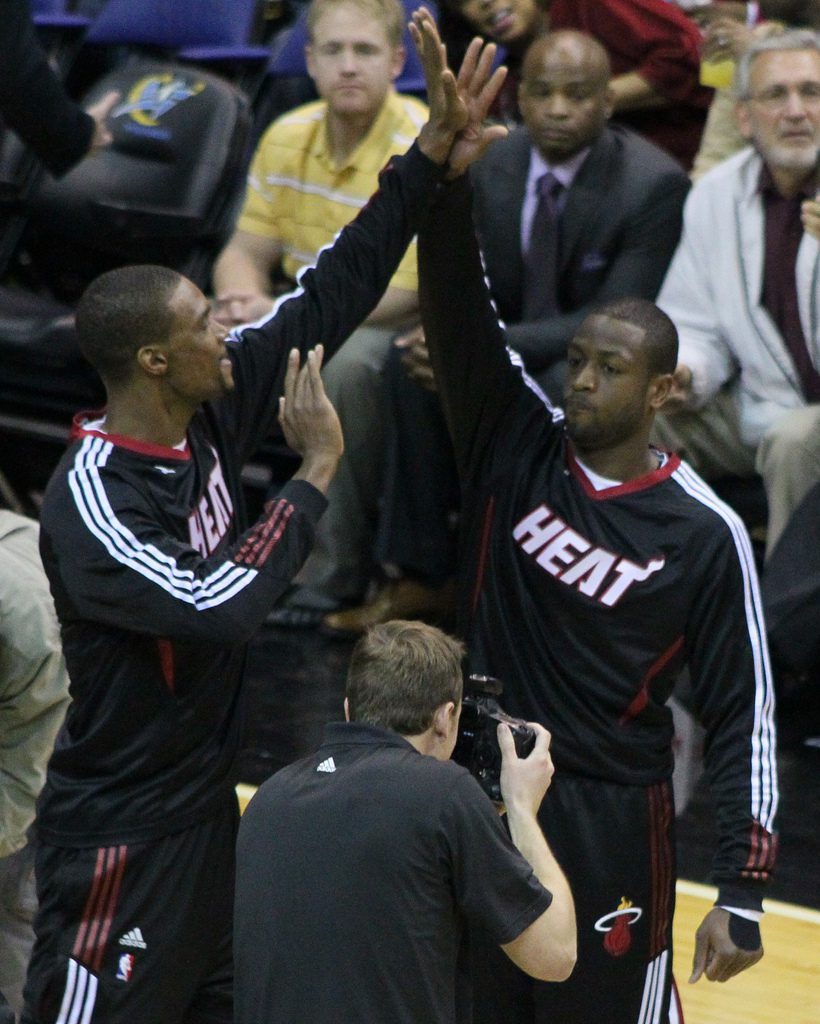 The Miami Heat have a chance to make the NBA Finals for fifth consecutive season, a feat that hasn’t been accomplished in a basketball eon, but they will have to do it without the best basketball player in the world, LeBron James. The Heat are worse without James, but, make no mistake, this is not the 1998-99 Chicago Bulls who went from a dynasty to worst team in the league in one offseason. Losing the best player in the world is a big deal. Nothing Pat Riley did would have satisfied fans outside of building a time machine and signing Michael Jordan in the midst of his first three-peat. The free-agent signings of Luol Deng and Josh McRoberts along with other additions have provided depth that was sorely missing in previous years.

In the Eastern Conference, all you have to do is make the playoffs, a pretty simple feat, then anything can happen. The Chicago Bulls and Cleveland Cavaliers are the two best teams in the conference, but the cores of both teams lack the cohesion already forged by the Heat in their deep playoffs runs from the past four seasons. The Heat reaching the 2015 Finals seems insane to some, but the Bulls and Cavaliers are also relying on star players with a litany of injuries over the past three seasons. Nothing is guaranteed, and we have no legitimate reason to assume the Heat are done. The first reason for hope starts with the promoted sheriff in town, Chris Bosh.

Most Important Player: Chris Bosh (16.2 PPG, 6.6 RPG, 1.1 APG)
The $118 million man is ready to step it up. Bosh has been vastly unappreciated for doing the dirty work and playing his role which dropped his per game averages. He is not bitter about the role he played on a two-time champion. His comments to Bleacher Report about the challenge of becoming the No. 1 option again exude confidence and anticipation.

“I’m excited,” said Bosh, who averaged 16.2 points in a career-low 32.0 minutes per game last season. “I really want to do it for the city of Miami—to show my evolution and my growth, and display a different level of my talent. It’s not easy; I went from [about] 20 [points] and 10 [rebounds] in Toronto to 16 and 7 last season.

“I’m a much better player than I was in Toronto, and I’ll be able to give Miami a lot more. I’m excited to really test out what I’ve done over these years, as far as leadership is concerned, as far as what’s on the court is concerned, and really put it out there.”

All elements of Bosh’s game have improved since he was a young veteran with the Toronto Raptors, most notably his long-range jump shot. The Heat coaching staff asked Bosh to work on his perimeter game because LeBron James wanted to occupy the paint. Two championships later, no one can say the strategy was a failure, but taking Bosh out of the paint took away some of the best elements of his game.

Despite being in his 11th season, we can expect production close to his Toronto years.

X-Factor: Dwyane Wade‘s health
In the last three regular seasons, Wade has missed 17, 13, and 28 games. Is that because the Heat believed LeBron James could take on additional wear and tear, or was Wade legitimately injured? The Heat actually need Wade to be available for the regular season now, not just when he’s supposed to magically become a superstar in the postseason. Last season’s per-game numbers are incredibly deceptive. He shot 55 percent from the field but most of those shots were near the basket in one-on-one situations because of the attention LeBron James garnered from defenses. Those days are over.

Wade will be primarily guarded by the opponent’s best perimeter defender for every game. He also won’t be able to take as many wild gambles on defense without another elite wing defender to hold down the fort. Wade is still capable of playing like a superstar, but the Heat need him to consistently contribute as a reliable No. 2 option.

Rotations: This is still a guessing game of sorts since the roster saw a lot of turnover after LeBron James’ departure. The starting lineup will is set.

Norris Cole, Udonis Haslem, and Chris Andersen are certain to be rotation players since they were part of the core for the championship years. It’s hard to know what to expect after that. Danny Granger could see playing time, but was only played by the Los Angeles Clippers in dire situations last season. Shawne Williams is not a reliable rotation player. Shannon Brown could be a decent option, but he has seen several ups and downs since leaving the Los Angeles Lakers. Everyone else on the roster is a rookie, or a basketball journeyman.

The front office decided to maintain a small ball roster which is somewhat confusing because that style tends to require a lot of energy on both sides of the ball to be effective against size. Three of the Heat’s starters have played in the league at least 10 seasons. Anyone else see this being a tad impractical?

What Needs To Go Right: A rejuvenated Luol Deng plays as well as his All-Star years, Bosh returns to All-Star form, and Wade plays like his old self in 70 regular season games. Two out of three of these would be good, but all three of these factors working in tandem could realistically push the Heat as a contender to make the Finals for the fifth consecutive year.

It’s Really Bad If: Norris Cole never gets over last postseason’s horrid performance, Josh McRoberts’ injury problems reoccur, and Wade is incapable of playing like an All-Star. The Heat are going the make the playoffs even if all three of these things happen because of the ineptitude of the Eastern Conference, but they would have no chance of making it beyond the first round in the worse case scenario.

Bold Prediction: Fans and pundits alike are underestimating what the 2014-15 Heat are capable of.

Miami Heat players loading up on the bus to go to media day pic.twitter.com/S1B1xnuXJ8

This is a really solid team that could actually make some noise in the postseason. Expectations are low and the spotlight is everywhere in the East except Miami. This will bode well for the Heat, and will allow them to find themselves without the grueling, everyday scrutnity that comes with LeBron James’ presence.

When it’s all said and done, the Miami Heat will fall to the Cleveland Cavaliers in the 2015 Eastern Conference semifinals after six grueling bouts.

Chris Bosh, PF
Strengths: Strong shooter from everywhere on the floor, underrated defender, sold post game, highly motivated.
Weaknesses: Physically weaker than many PFs, hasn’t been No. 1 option in five years.
Season Prediction: Expect big things from Bosh this season. His averages are certain to increase as the No. 1 option, and he will excel at this role. Bosh will lead the Heat to the three-seed in the East. Bosh is capable of elevating the Heat past the elite teams in the Eastern Conference for a fifth consecutive Finals berth. This scenario won’t happen without unexpected circumstances, but we won’t be able to blame Bosh when it’s all said and done.

Shannon Brown, SG
Strengths: Mid-range jumper, championship pedigree, athleticism.
Weaknesses: Defense, reliance on talent limits efficiency.
Season Prediction: Barely comes off the bench to play. He couldn’t make the rotations for the New York Knicks or San Antonio Spurs last season. The Heat are desperate for depth at the shooting guard spot since Wade is certain to miss games, but Brown is not the the salve for this problem.

Mario Chalmers, PG
Strengths: Confidence, nicknames, defense, streaky shooting.
Weaknesses: Streaky shooting, confidence.
Season Prediction: Chalmers will recover from his disastrous performance in the 2014 NBA Finals, and be the charismatic, solid player the Heat need him to be. LeBron James and Super Mario keep throwing verbal barbs at each other from long distance.

Fact: Chalmers is looking forward to playing the Cleveland Cavaliers more than any other Heat player. This motivation will propel him to a higher level of consistent play.

Norris Cole, PG
Strengths: Confident, defense, ’90s haircuts.
Weaknesses: Shooting, doesn’t run offense well.
Season Prediction: He will be out there because he is the designated backup point guard, but don’t expect anything special. He is what he is.

Andre Dawkins, SG
Strengths: Moves well without the ball, mid-range jumper.
Weaknesses: Ball handling, on-ball defense, doesn’t look to pass.
Season Prediction: Dawkins will be at the end of the bench the entire season. If he’s called upon, things are going really bad.

Luol Deng, SF
Strengths: Scores in a variety of ways, one of the best defenders in the league, superb basketball IQ, toughness.
Weaknesses: Recent health issues, struggles to score against elite defenders.
Season Prediction: Deng has been given the unenviable position of replacing LeBron James. Obviously, he’s not capable of replacing James. No one in today’s NBA could fill that void, but Deng is no slouch. He is an All-Star talent with a ’90s moxy and the respect of every coaching staff in the league. Deng is going to do whatever the Heat need and do it well.

Danny Granger, SF
Strengths: Decent ball-handler, streaky shooter.
Weaknesses: Health, confidence.
Season Prediction: This is a guy who once averaged 25.8 PPG, and now his body won’t allow him to perform anywhere near that level. Somehow, this news didn’t make it out until the Heat’s media day.

Heat’s Danny Granger had knee surgery 2 months ago, says Pacers tried to bring him back in free agency http://t.co/WYCy1G5W8Y

Granger plays in 50 games and will be healthy enough to limp into the playoffs, but won’t have enough in the tank to have a major impact.

Weaknesses: Doesn’t score easily in one-on-one situations, athleticism.
Season Prediction: McRoberts’ contribution isn’t necessarily going to show up in numbers. He will be an important contributor and a quick fan favorite because of his toughness and willingness to do the dirty work. This won’t be a pickup the Heat regret unless his recurring injuries return.

Shabazz Napier out in Vegas now trying to make up for his Orlando Summer league performance, where he posted the 10th worst PER of all time.

Season Prediction: Barring injury, Napier won’t see much playing time. The Heat traded up in the draft to pick him up to appease LeBron James before he signed with the Cavs … yeah.

Dwyane Wade, SG
Strengths: Exceptional finisher at the basket, post moves, off-ball defense.
Weaknesses: Health, jump shot.
Season Prediction: 70 games played with less efficient shooting numbers, but higher per-game averages across the board because of LeBron James’ absence. He has slowly been moving his shots closer and closer to the basket as his career advances because his jump shot suffered as injuries continued to pile up. This adjustment has prolonged the longevity of his elite form, and will be exercised until he retires.

Wade is far from done, but the outcome of the Heat’s season is reliant on the health of Wade’s knees. It seems inevitable that Wade will miss regular season games, but he should be ready to put everything on the line once the postseason arrives.

Shawne Williams, SF
Strengths: Length, an okay long-range shooter.
Weaknesses: No strong asset to offense game, poor defender.
Season Prediction: The Heat don’t expect anything from Williams, and he has nothing to give other than being able to hit wide-open threes. His signing will have no discernible impact on the team.