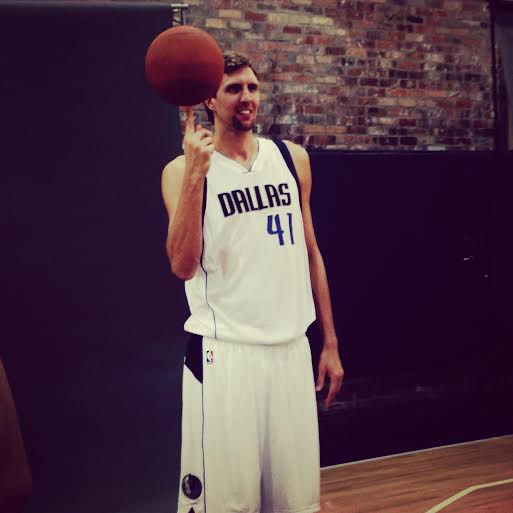 The vim that flowed through the halls of the event level of the American Airlines Center on Monday afternoon had a unique calmness to it, which seemed to counterbalance the sense of excitement one feels when eyeing the Dallas Mavericks 2014-15 season roster. Members of the press strolled about the long lower corridor that stretches around the Center, their capricious banter echoing off the stone walls as they greeted each other. The summer break was officially over as the curtain closed on an extremely eventful offseason. Even with the brackish words that were spoken by Houston Rockets general manager Daryl Morey that morning about Mavericks owner Mark Cuban still festering in the air, the mood was simply refreshing (sorry we nabbed Chandler Parsons from you, Morey, but kindly remove the fire ants from your crack).

Head coach Carlisle was the first of four to be interviewed by members of the press in a room down the hall from the team’s practice court where players were gathering for pictures. Carlisle, despite his somewhat normal moody-looking demeanor, was in jovial spirits as he strolled into the room to answer the media’s questions. “One month from tomorrow, we open up the season on the road with a lot of new guys with lots to get done on one hand,” Carlisle expressed. “On the other hand, there’s going to be a real effort by the staff to make things simpler so our new guys can get to know each other without a lot of extra confusion because you’re trying to do a lot of different things. So simplicity is big. You know we have to develop chemistry in as quick a period as we can.”

His take on the new group of players:

“I like that we have Tyson Chandler back, that’s really a huge acquisition for us. All the new guys that we got, they all add something. Tyson always had this great energy, and I think we have that with a lot of our other new players too—Jameer Nelson is going to be a leader, Felton has got some of that (same) personality, some of that toughness, Jefferson’s got some of that (too)—I can just see the team taking on a different personality than in the last couple of years.”

On Chandler Parsons fitting into the mix:

“He’s a very good all-around player and he’s another guy that brings personality to the team, and if you don’t believe me, just ask him. He can do a lot of different things—he passes it, he shoots it, he drives it, he makes plays. Defensively, he’s done a good job in this league to this point and we believe that he can continue to get better. We gotta immerse him in our system.”

Carlisle is positive that the roster this year is extremely strong in terms of depth since the Mavericks have a great deal of multi-positional players.

The implacable seven-foot power forward entered the room with the same sort of sleepy-eyed charisma he always seems to carry about him, immediately likable in a non-envious way. After some light banter about films, veteran Dirk Nowitzki got down to business. “Just winning is all it’s really about when you get old,” Nowitzki said after being asked what motivates him. “When you’re young and making All-Star games, it’s fine, but when you get old it’s all about being on a winning team. Winning is the only thing that matters.”

“He’s still finding ways to be efficient—he can shoot, he can run some sweeter rolls, he’s a great passer for his size. I think we’re going to use his versatility.”

On if he’s looking to change anything about himself or his playing style this year:

“I just actually told NBATV that I was gonna try to get a little more athletic this summer, but it wasn’t gonna happen, so I might as well follow something I can control. I worked on some stuff, worked with Holger (Geschwindner, his longtime shooting mentor) the last five, six weeks just (trying to be) more efficient. Changed some of my stuff (like) my shot—we’ll see how that works.”

On if he feels old:

It’s wildly known in the cosmopolitan city of Dallas that center Tyson Chandler was part of the reason the Mavericks held a very special parade in 2011 before he was traded away to create cap space. However, Cuban learned from his mistake and brought Chandler back during the offseason—and gave up quite a bit to do so. Tyson transformed the room the second he walked in, his cool ease and smile a welcoming sight to the media. He shot some whimsical words of “oh, you’re still here?” to some of the more familiar faces of the Dallas/Fort Worth press before getting started.

On if the feelings of his return were similar to that of four years ago when he came to Dallas:

On if he thinks the expectations of him are different this time around:

“Yes. I don’t think anyone knew what to expect the first time around. I was a player that competed against them, so I think that’s kinda what people remember me as. But clearly this time around, you know, having success with winning the championship here, the expectations are a little different.”

On what’s special about being back in Dallas:

One of the Mavericks’ hottest offseason catches is a brutal, all too real, exemplar of what a blond pretty boy should be. A rapacious glow of youth and immaturity seems to echo from his intense confidence, while his projected vainglory sense vibrates when he walks into a room. Luckily for the Mavericks, looks can be deceiving because when the small forward opens up his mouth to speak, he manages to silence all his naysayers with his high basketball IQ—and will most likely slay those same naysayers dead when he takes the court this season.

On if he’s worried about stepping in another larger player’s shadow:

“I’ve always been a team guy. I’m not trying to come here and “get mine,” you know, be the go-to guy necessarily. I’m gonna do whatever it takes for our team to win as many games as possible. Dirk is one of the greatest players to ever play and Monta (Ellis) can really score the ball, and adding Tyson, who is one of the best defensive centers in the league and can really finish (helps the team a great deal), so I thought with that core, and me being 25 years old, I can come and really help them out—I can make my teammates better. I’m just going to continue to be one of the more versatile players in the league.”

On if he’s comfortable in the power forward position and what needs tweaking:

After the interviews, players went back to their photo sessions and continued with their casual chitchat with the press in the corridor. Players joked and skipped around (yes, Raymond Felton actually skipped to a photo shoot down the hall, his laughter bouncing off a stack of bleachers), happily welcoming the new season with a sense of optimism. And why should they be optimistic? It’s looking to be a fruitful year.

Now that all the talk is done, it’s time to get to work and prove to the non-believers that the 2014-15 Mavericks can indeed bring another championship back home to Big D.