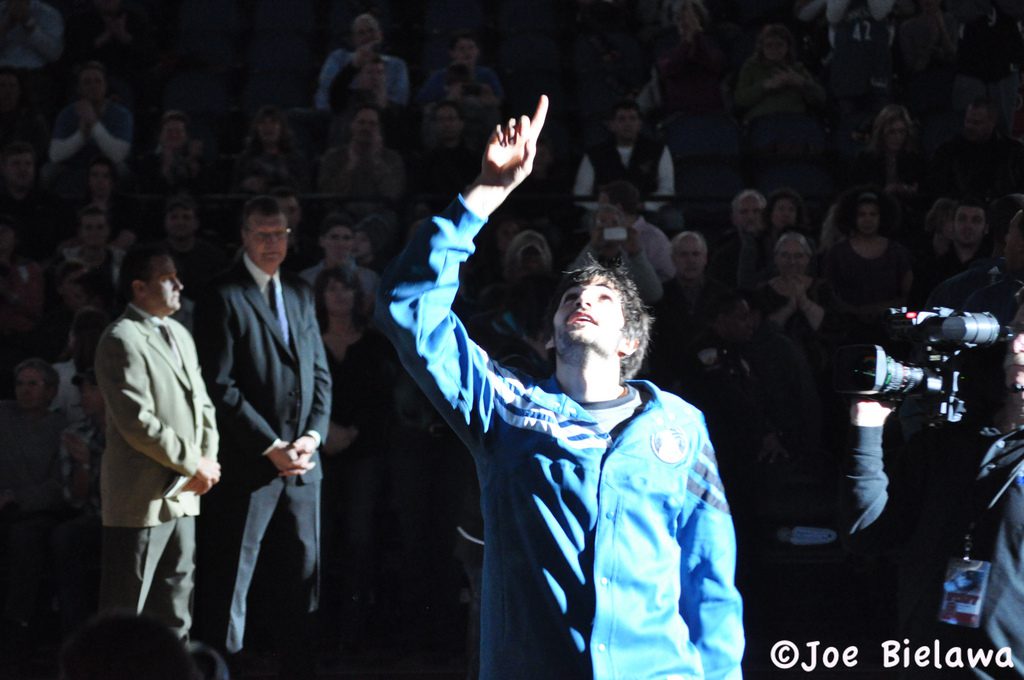 Most Important Player: Nikola Pekovic
Sure, Kevin Love filled out the stat sheet last year for the Minnesota Timberwolves, but Nikola Pekovic was the star of the team last year. An alienated fan base gravitated towards Pekovic over an inconsistent Ricky Rubio, and Pek put up strong offensive numbers to become one of the game’s top centers. The defense, though, remains an issue. Love didn’t do much to protect the rim, and Pekovic struggled to keep opponents from owning the paint in the defensive post. The next step in his game is to make like Gorgui Dieng and start locking down opposing big men to keep the young Timberpups in the game.

X-Factor: Ricky Rubio
Many veterans of seasons past are gone, leaving Rubio as a 23-year-old “vet” charged with being a key team leader. Rubio has not yet lived up to the hype he generated as a teenage member of Spain’s national team, but year number four with the Timberwolves will be critical for both Ricky and Minnesota. If Rubio can evolve into a legitimate scoring threat, especially in late-game situations, Minnesota could sneak into the playoff picture. If he maintains the status quo, expect another long season at the Target Center.

Rotations: Four of the starting five spots are locked down: Rubio at the point, Kevin Martin at shooting guard, Thaddeus Young at power forward, and Pekovic at the pivot. Coach Flip Saunders has two main options at the wing forward: the safe option (Corey Brewer) or the exciting option (Andrew Wiggins).
Whether he’s starting or not, Wiggins will get a lot of playing time, as will big man Dieng and backup point guard Mo Williams. Anthony Bennett should be the main backup at power forward, and he could see time at the three, as well. LaVine, Robinson, Budinger, and Muhammad will all be hard pressed to see the court for more than a couple minutes at a time as there are only so many wings Saunders can play at once – unless, of course, it’s garbage time.

What Needs To Go Right: The team needs to find a way to replace Love’s offensive numbers, and to develop a more sound team defense. It’s going to take more than one person to replace Love, but that’s why the Wolves got Wiggins, Bennett, and Young. Continued development by Dieng will help on the boards, but somebody on the wing needs to step up defensively beside Rubio to give what will be a streaky offense some help.

It’s Really Bad If: Martin can’t hit his shots. He’s the main outside threat, and opposing defenses will make it tough on the young wing and post players if he becomes a master bricklayer instead of keeping teams honest. Of course, the damage will be mitigated if Wiggins and Rubio show they too are threats from outside.

Bold Prediction: Someone not listed below becomes a key part of the offensive rotation (Brady Heslip’s sweet summer league shooting has me leaning towards him) and the Wolves play meaningful games in late March and early April for the first time since the Kevin Garnett years. Getting crushed in the first round of the playoffs is a good expectation if you combine the average Minnesotan’s optimism and pragmatism.

Anthony Bennett, SF/PF
Strengths: Slimmed physique, good shooting range, a fresh start.
Weaknesses: Small for the four position, streaky shooting.
Season Prediction: Bennett’s rookie season was widely regarded as a bust, but the move to Minnesota will mean more playing time. He showed UNLV Bennett explosion and fitness in the Las Vegas Summer League, and he had surgery to help with his sleep apnea issues. Despite being a second-year player without a track record of success, he should be a Most Improved Player candidate this season.

Corey Brewer, SF
Strengths: Great at running the floor on the break, improving defense.
Weaknesses: No more Kevin Love outlet passes, outside shooting touch.
Season Prediction: We all know Brewer can dunk, but it seemed like half his points came off of poaching dunks of Love defensive rebounds. With the influx of promising wing talent, Brewer will need to establish a role as a defensive stopper and find more success in the half-court offense to keep regular playing time.

Chase Budinger, SF
Strengths: Perimeter shooting, high-energy on both sides of ball.
Weaknesses: Ball-handling, not an elite three ball shooter.
Season Prediction: Budinger has the chance to develop into a larger role with the Wolves, especially since he appears past his knee issues, but there is a lot of blue-chip talent in front of him. He will be fighting for not just playing time, but to even be dressed on the bench most nights.

Gorgui Dieng, C
Strengths: Defensive instincts, athleticism, rapidly-developing offensive skill set.
Weaknesses: Still raw on offense, foul prone.
Season Prediction: If last season wasn’t Dieng’s breakout season, this one most certainly will be. He was nothing short of spectacular for Senegal in the World Cup this summer, and had several big games while filling in the starting five for Pekovic. He should see expanded playing time at the four next to Pekovic so Saunders can take advantage of his defensive prowess.

Zach LaVine, PG/SG
Strengths: Highly athletic, can slash the lane or shoot from mid- to long-range.
Weaknesses: Needs to adjust to the physicality of the NBA, improve hoops IQ and defense.
Season Prediction: There will be pressure on Minnesota’s top draft pick to produce right away, but LaVine is very much a project. Look for Flip to have him come off the bench in a high-intensity role, running the court in an up-tempo offensive style. He can be a solid contributor in limited minutes right away while he bulks up and learns the ins and outs of The Association.

Kevin Martin, SG
Strengths: Pure shooter capable of hitting big shots and holding his own on defense.
Weaknesses: Struggles to stay healthy, needs to improve passing.
Season Prediction: Martin is now the top offensive threat on a roster full of inconsistent or unknown weapons. His season depends on Minnesota’s ability to space the floor on offense, and with so many young guys still learning how to play on the team, he’ll likely need to create his own scoring chances much more than he did when Love was on the floor with him.

Shabazz Muhammad, SF/SG
Strengths: Decent shooter, aggressive albeit raw defender with excellent length for his size.
Weaknesses: Needs to polish every aspect of his game.
Season Prediction: Muhammad will be battling with Chase Budinger for a spot on the active roster. He showed some flashes of improvement – his 20 point, six rebound effort against Phoenix in late February comes to mind – but it likely won’t be enough for him to find minutes over Wiggins, Robinson, Brewer, etc.

Nikola Pekovic, C
Strengths: Strong finisher inside, has one of the more physically imposing frames in the NBA.
Weaknesses: Does not defend the rim well.
Season Prediction: Pek is at a crossroads this season after breaking out as an offensive machine last year. The Wolves’ interior D was atrocious with Pekovic and Love in the frontcourt, and Thaddeus Young is shorter and less imposing than the recently departed All-Star. If the big man doesn’t find a way to protect the hoop more effectively, he could lose his starting role to Dieng mid-season.

Glenn Robinson III, SF/SG
Strengths: Good at finding easy buckets, built to be an elite defender.
Weaknesses: Needs to rediscover shooting touch, improve ball handling.
Season Prediction: He could spend most of the year in the D league, but an injury or two could have him playing significant minutes if he shows he can shoot and lockdown his opposing number on a near-nightly basis. He already has the instincts to excel on defense, but like most rookies, building muscle is his priority.

Ricky Rubio, PG
Strengths: Passing, generating scoring chances for teammates, elite stealing ability.
Weaknesses: Outside shooting, outside shooting, outside shooting.
Season Prediciton: With Love gone, Rubio now commands the most star power on the team. The front office, however, seems hesitant to give the Wolves the label of “Ricky’s team” because of his inconsistent offensive output. Simply put, if he wants this to be his team, he needs to show marked improvement shooting the ball from range, and he’s got the chance to show it this year.

Ronny Turiaf, C
Strengths: Strong defensive body, decent touch near the rim.
Weakness: Age.
Season Prediction: Turiaf has been a serviceable backup for years around the league, and did a good job coming back from injury last year to fill substantial minutes when Pekovic went down with injury. His depth will be crucial, especially if A) Pek or Dieng go down with injury, or B) if Dieng and Pekovic often find themselves on the court at the same time.

Andrew Wiggins, F/G
Strengths: Size to match evolving three position, leaping ability, prolific scoring potential.
Weaknesses: Too lanky for physical play, not an end-of-the-game option.
Season Prediction: The big knock on Wiggins is how he handles finishing games. But, as a rookie with veterans Martin, Pekovic, Williams, and Young around him, he won’t need to be the go-to guy with the game on the line. Look for him to have a solid rookie campaign as he works to build himself into an elite wing player.

Mo Williams, PG/SG
Strengths: Three-point shooting, strong off the bench.
Weaknesses: Defensive ability has been slipping.
Season Prediction: The Wolves signed Williams to backup Rubio, but he could see meaningful minutes at the end of games as he is a much better scoring option with the game on the line. The 11-year veteran is starting to lose a step, though, so he could turn from crunch-time hero to goat in a heartbeat.

Thaddeus Young, SF/PF
Strengths: Proven team leader, plays bigger than 6’8” with plus athleticism.
Weaknesses: Struggles in the post against bigger opponents defensively.
Season Prediction: Young will slide into Love’s starting role at power forward, but he just doesn’t fit the title of prototypical power forward. Saunders will have to stretch the court on the offensive end to let Young’s significant offensive talents shine, but Young will need to lean on his teammates for defensive help against bigger lineups. Being out of Philadelphia should do nothing but motivate him to help speed along the development of his younger teammates.