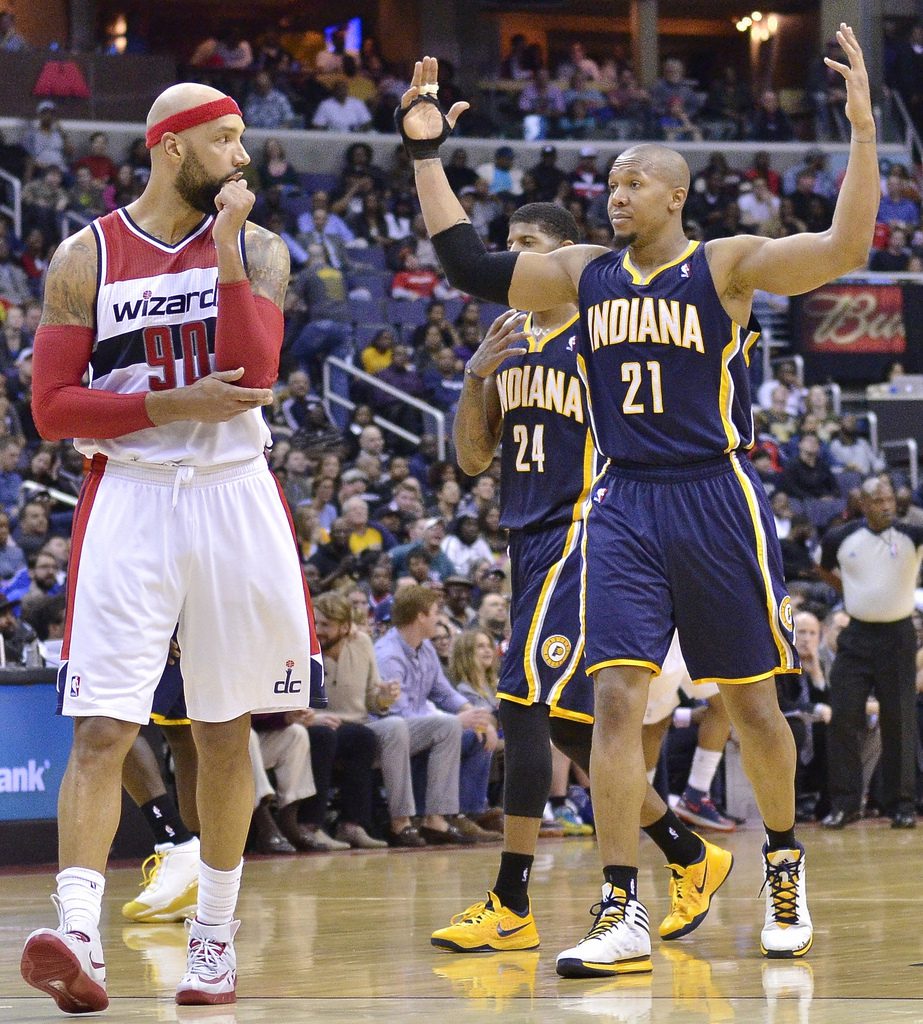 Most Important Player: David West
Go ask Frank Vogel who the Pacers most important player is and he would give you the same answer. West doesn’t put up gaudy numbers and he’s definitely not a pretty player, but he’s a guy you most certainly want to go to war with. As Vogel described last year, West leads the Pacers in “sacrifice and team play.” He does all of the dirty work and he’s probably the best enforcer in the league. What he’s not is a guy who can put the team on his back for an entire 82 game schedule.

X-Factor: Roy Hibbert
Look, I understand the importance of having an elite rim-protecting center, and that’s half of the reason why Hibbert gets the nod as the Pacers X-Factor. At his best, he gives offensive players more trouble scoring at the rim than any other big men in the league. Whether he’s blocking shots or just standing in the paint being a large human being, Hibbert’s presence was a major reason why Indiana’s defense was among the best in the NBA last season.

On the flip side, there is no way to tell if it will be Roy Hibbert or Jahidi White wearing #55 for the Pacers this season. Hibbert’s startling decline into unplayableness last season could possibly be credited to chemistry issues. Maybe he just crumbled under the weight of high expectations. I’d theorize that it’s a little of both, with a dash of he’s overrated to begin with. Regardless, with a decimated starting five Hibbert needs to be ready to put on his big boy pants and play like a man.

Rotations: Hometown hero George Hill will join West and Hibbert as the returning starters for the Pacers this season, and C.J. Watson, Luis Scola and Ian Mahinmi will back up those three respectively. This leaves the shooting guard and small forward spots looking like they will be up for grabs. I’d expect C.J. Miles to get the nod over Rodney Stuckey, simply because Miles can shoot from the outside and Stuckey could build a house in Indianapolis using all of the bricks he had in Detroit. The small forward spot is anyone’s guess. The Pacers were high on Solomon Hill going into last year but he hardly saw the floor. Chris Copeland had the same problem. Newcomers Chris Singleton and Damjan Rudez are both in play too.

What Needs to Go Right: Somebody in the Pacers organization needs to hit the rewind button. They need to go back to before Paul George broke his leg … before Lance Stephenson left Indiana in free agency … before Roy Hibbert inexplicably turned into Shelden Williams … hell, maybe even before they flipped Kawhi Leonard for George Hill on draft night back in 2011. It turns out there is no rewind button for real life, so, umm…

It’s Really Bad If: I hate to be grim, but this ship has already sailed. It already is really bad in Indy considering where they were last season (i.e. two games away from the NBA Finals). The Pacers lost their superstar Paul George to a gruesome leg injury just two weeks after losing Lance Stephenson, their Paul George insurance. Now Indiana is left without 40 percent of a starting five that was largely responsible for a 56 win regular season last season. Frankly, Indiana is probably on pace for their worst case scenario. The Eastern Conference isn’t quite good enough to push the Pacers as is to the very bottom of the conference. If they end up with 30-35 wins and miss out on the playoffs AND a good lottery opportunity, all is lost for the season.

Bold Prediction: Not that I agree with the move, but I’ll say Frank Vogel won’t be back as Indiana Pacers head coach for the 2015-16 season. Vogel was seemingly on the hot seat as the Pacers imploded during the latter half of the season last year, and if he doesn’t have the full support of Larry Bird, Kevin Pritchard and Donnie Walsh, they may use a down season as an opportunity to oust the young head coach.

Lavoy Allen, PF
Strengths: Can play some center along with power forward. Reliable as the popper in pick and pop situations.
Weaknesses: Struggles defensively at times. Doesn’t always assert himself offensively.
Season Prediction: Like last year, Allen probably won’t see much playing time because of the logjam in the Pacers frontcourt.

Chris Copeland, SF
Strengths: Can get shots up in a hurry. Plays hard in limited minutes.
Weaknesses: Can get shots up in a hurry (it’s not always a good thing). Not a ton of experience in big minutes.
Season Prediction: Copeland will surely get more minutes than he got last year, but is he better suited starting or coming on as a change of pace player off the bench?

Roy Hibbert, C
Strengths: Premier rim protector. Larger than any opposing center.
Weaknesses: Emotionally fragile. Not assertive enough offensively. Frequently drifts in and out of games.
Season Prediction: Call me crazy, but I don’t trust the inconsistent Hibbert at all. I would say that it’s more likely he’ll be traded than make the Eastern Conference All-Star team again.

George Hill, PG
Strengths: Quality game manager. Above average defender.
Weaknesses: Like Hibbert, he really dropped off late last season. Not a dynamic scorer or playmaker. Sometimes far too passive.
Season Prediction: Hill is a home crowd favorite but rumors that Indiana was trying to pry Goran Dragic away from Phoenix make you wonder how much confidence the organization has in him as a starting point guard. Nevertheless, expect more of the same from Hill this season.

Solomon Hill, SF
Strengths: Good size. Armed with a quick first step. Finishes well around the basket.
Weaknesses: Not really great in any one facet of the game. Inexperienced.
Season Prediction: If Hill has gained the trust of the coaching staff and come along since last season Hill should be one of the few in contention for one of the final starting spots.

C.J. Miles, SG
Strengths: Can space the floor and knock down open three-pointers.
Weaknesses: A one trick pony offensively. Not known for his defense.
Season Prediction: Miles will be splitting time with a few others in the shooting guard and small forward slots. Even though he won’t defend like Frank Vogel would like, he’s one of the few outside shooting threats on the roster so he’ll see the floor.

Arinze Onuaku, C
Strengths: Built like an oak tree. Scores efficiently in the paint.
Weaknesses: Not overwhelmingly athletic. Wasn’t a prolific rebounder in college despite his size.
Season Prediction: Onuaku will spend more time in a Fort Wayne Mad Ants uniform than an Indiana Pacers uniform.

Damjan Rudez, SF
Strengths: Good size for a small forward. Capable of being a stretch four. An excellent outside shooter.
Weaknesses: May take him time to acclimate to NBA.
Season Prediction: Rudez made a splash in Europe and he should make a tangible impact in the NBA. He won’t play big minutes, but the Pacers need floor spacers and Rudez is that for sure.

Luis Scola, PF
Strengths: Post savvy. Nice mid-range touch. Good passer.
Weaknesses: He’s not going to bang bodies in the post or mix it up for rebounds. He’s the anti-David West in that respect.
Season Prediction: Scola will remain the back-up power forward to David West and likely spearhead the offense for the second unit.

Chris Singleton, SF
Strengths: Good size. Able to defend a few different positions.
Weaknesses: A well-below average offensive player.
Season Prediction: Singleton only played in 25 games last year in Washington and it’s not likely that he’ll be featured much more than that in Indiana.

Donald Sloan, PG
Strengths: A good ball-handler and distributor.
Weaknesses: Inexperienced. Not an impressive scorer.
Season Prediction: More of the same for Sloan this year. He was only featured in 48 games last season, mostly in garbage time or filling in for Hill or C.J. Watson during injuries.

Rodney Stuckey, SG
Strengths: A good slasher. Pretty athletic. Should be a willing defender.
Weaknesses: Isn’t a scoring threat from the perimeter. Relatively one dimensional offensively.
Season Prediction: Stuckey has big shoes to fill. The Pacers need someone to be the poor man’s version of Paul George or Lance Stephenson. Stuckey can probably be the dirty homeless man’s version of either.

C.J. Watson, PG
Strengths: A dependable veteran. Quick with the ball in his hands. Plays relatively mistake free.
Weaknesses: He won’t overwhelm any opposing second units. He’s only steady, not a game-changer.
Season Prediction: Watson was comfortable in a back-up role to George Hill last season. The story should be the same this season.

David West, PF
Strengths: Leadership. Hard worker. Very intimidating. Big game player.
Weaknesses: Father Time is chasing him down. Ill-prepared to carry the offensive burden he’ll be forced to this season.
Season Prediction: West is the heart and soul of a team with not much else going for it. He’s probably their best player, and that’s not a good thing for their chances of another playoff season.