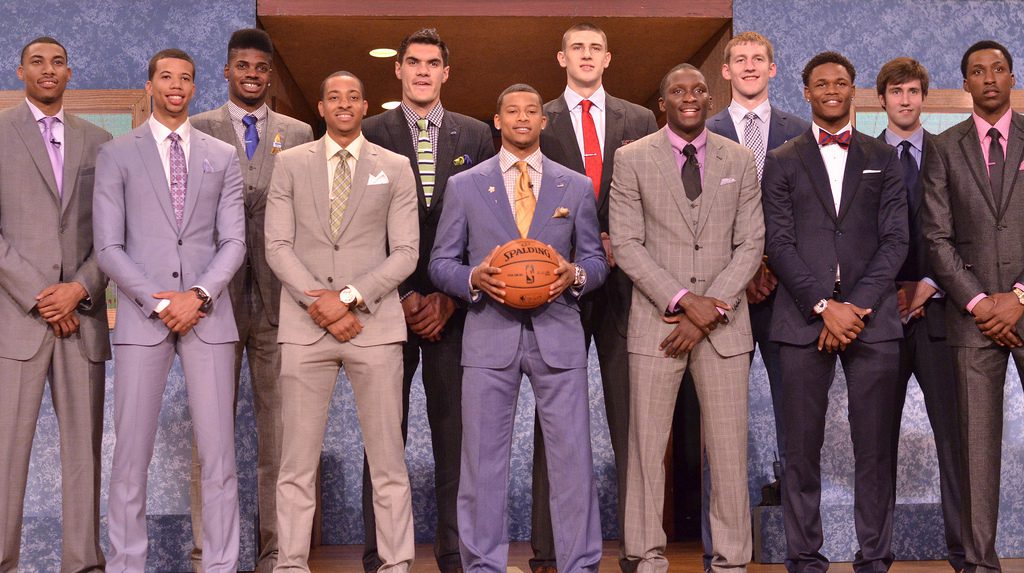 The 2013 NBA Draft went by with little pomp and circumstance. Maybe the talent was downplayed. Maybe everyone was too busy looking forward to the upcoming “draft of the decade” in 2014. Many of last year’s rookies definitely surprised the consensus with how well they adjusted to their new life in the league. Too many times players come out the gate and have decent rookie campaigns but hit a wall and suffer the dreaded “sophomore slump.” These rookies are set to blast off in year two and disregard any notion of a letdown.

If the NBA recorded the stat for “the most times getting a punch thrown at you” in a season, Steven Adams would be in the running for hardware every year. The young New Zealander is a hard-nosed, rough-and-tumble type of player who is always in the middle of a scrum. He’s playing behind Serge Ibaka, Kendrick Perkins, and Nick Collison now, but the true seven-footer can elbow his way deeper into the rotation and maybe into the starting lineup.

The youngster from Gonzaga with the hippie hairdo is in a good place, depending on how you look at things. The seven-footer with the feathery touch has been passed the torch, from a long line of great Celtic big men, and will continue on the legacy built by the likes of Bill Russell, Kevin McHale, Robert Parish, and Kevin Garnett. Granted, he’s not on the level of greatness that these legends have attained, but Kelly Olynky’s skill set and toughness are a good starting point. It’s clear the Celtics are in rebuilding mode, and the youth movement in beantown is evident. Olynyk is going to be important in this young frontcourt, with Jared Sullinger and veteran Jeff Green. Olynyk has range, he hits the glass with intention and he’s an underrated passer. He’s definitely going to have to bulk up his slender frame with a little more muscle, and will also need to hone in on his defensive capabilities. With the uncertainty surrounding the status of Rajon Rondo, and whether he will remain a Celtic, leaves a lot of variables in this Celtic lineup. One thing is clear though, this year will be a huge leap for Olynyk.

Snell doesn’t seem too outspoken, so it’s no surprise that he’s noticeably bulked up over the offseason. He’s gearing up for what looks to be a re-vitalizing year in the Windy City. With the re-return of former MVP and prodigal son Derrick Rose, the addition of Pau Gasol, and the continued work of Joakim Noah and Taj Gibson, the Chicago youth corps is looking promising. Snell joins Jimmy Butler and rookie Doug “McBuckets” McDermott as the young guns looking to make some noise. Snell has the size, he has range on his outside game, and he plays with a poise that you like to see in prospect. Starting with cutting his cornrows before summer leagues, the winds of change are blowing in the right direction for Tony Snell.

A summer playing under coach Mike Krzyzewski for Team USA does wonders for a player’s career. Just ask anyone who’s done it, ever. The Duke alum already has the athleticism, motor, and toughness to bang in the big leagues, now playing on the world stage with more advanced teaching by the great Coach K. Mason is primed to take over in Brooklyn as the legendary Kevin Garnett slowly rides off into the sunset (very slowly). Plumlee filled in huge last season when All-Star center Brook Lopez went down to injury. With Lopez back in the fold scoring like he can, Mason will be able to help out in the rebounding department, where the seven-foot Lopez has come up short. With his new coach Lionel Hollins, and everything else he learned from his gold medal tour through Spain, Plums is out to show the league what he’s added to his game.

Worst number one draft pick in history, worst rookie season in a decade, bust! These are just a few of the labels put on the young Canadian drafted first overall in last season’s draft. I’m sure he had different ideas on how his rookie year would be, but things didn’t go exactly as Bennett hoped. Maybe he wasn’t in shape, maybe he was nervous, maybe he just wasn’t good enough. Those questions will be answered as Bennett gets a fresh start. With the return of the King, LeBron James, to Cleveland, Bennett was traded to the Minnesota Timberwolves, along with this year’s number one draft pick, Andrew Wiggins. Maybe being closer to his home country will help, maybe it’s just the new scene and team altogether. Regardless, Bennett has a second chance to make a first impression.

They call him the Greek Freak. I’m not too high on that nickname but the kid is something that’s not easy to explain. With hands that size, arms that long, and talent that raw, there aren’t many other names that could describe the 6’10” (and growing) Phenom of Pathos (hmmm). His stats don’t jump out at you like some others on this list but it’s other things that get the imagination piqued: his knack for playing defense, the way he runs the floor, his athleticism, his fearless approach to the game, just to name a few. They have an exciting youth movement in Milwaukee, beginning with the Bucks’ new head coach Jason Kidd, who made a controversial move from the Brooklyn Nets. The Bucks have a promising nucleus of Larry Sanders, Ersan Ilyasova, and Brandon Knight, combined with John Henson and rookie prodigy Jabari Parker. Giannis the Giant will be making a bigger name for himself in the Central Division and the rest of the league.

Last season was one to forget for the New York Knicks. Aside from the stellar play of Carmelo Anthony and the return of Zen Master Phil Jackson to the organization, there weren’t many positives to take away from that atrocious campaign. Tim Hardaway Jr. is one of those positives. The high-energy, high-flying sharpshooter from Michigan took the Big Apple by storm and immediately became a fan favorite. He’s got a flare for the big stage, and like his father, Hardaway Sr., he has no problem being in the spotlight. The starting shooting guard position is up for grabs with J.R. Smith and Iman Shumpert, and Hardaway has his eyes on the prize. But whether starting or not, I see him playing a huge role for rookie coach Derek Fisher and the new triangle offense. Timmy Time Jr. can afford to sharpen his defense a bit, but with his high motor and silky jumpshot there will be Three the Hardaway in Madison Square Garden this season.

He’s vicious, he plays like he’s been here for years, now Victor Oladipo has the keys to the car. With the departure of longtime Orlando Magic Jameer Nelson, Oladipo is now the lead guard and the engine behind a Magic team that’s looking to move onward and upward. With Tobias Harris, Nikola Vucevic, Channing Frye, Moe Harkless, and high-flying rookie Aaron Gordon, Oladipo has the weapons to do damage in the now wide open Southeast Division. He has elite athleticism, and a ferocious approach to getting to the basket. But it’s his tenacious attack on the defensive end of the floor that makes him stand out on this list. If he’s going to take his duties as the prime ball handler to the next level, he’s going to have to slightly sharpen his decision making. He has the work ethic to do so. All systems O in the Magic Kingdom.

He is clearly one of the future leaders of this Utah Jazz franchise. With Gordon Hayward, Alec Burks, and Australian rookie Dante Exum, in addition to Burke, the Jazz have invested heavily in the future of their backcourt. Burke has the attitude to take the lead on the charge. He’s had a leader’s mentality coming out of the University of Michigan last season. His rookie campaign got off to a rocky start while he recovered from injury, but this year he’ll be starting the season off on the right foot. That’s bad news for Western Conference opponents. He’s a solid mix of ball handling and distributing, along with a nice outside touch. As with many rookies, he’ll have to ramp-up his defense, especially if he wants to hold his own against the likes of Chris Paul, Russell Westbrook, Tony Parker, and others on the long list of dynamic point guards in the conference, and talent-wise, he’s capable of making that improvement. The Jazz may not have the firepower to make much noise in the heavily loaded West but they will be getting louder as their young leader continues to come into his own.

Last season’s Rookie of the Year award was all but handed to Carter-Williams. He had all the playing time and opportunity to go full steam ahead, without any pressure to win anything. The results were clear. Statistically, he had one of the best rookie campaigns we’ve seen in a long time. That didn’t translate to many wins but it was fun to watch. With each passing year, the patience of Sixers fans run thinner and thinner, and you don’t want to be on the wrong end of the wrath with the City of Brotherly Love. Luckily, MCW has the skills to bring the team back to East Coast prominence. It’s going to be a few more years, but Carter_Williams will continue to excite, even more so than last year. The clock is ticking.