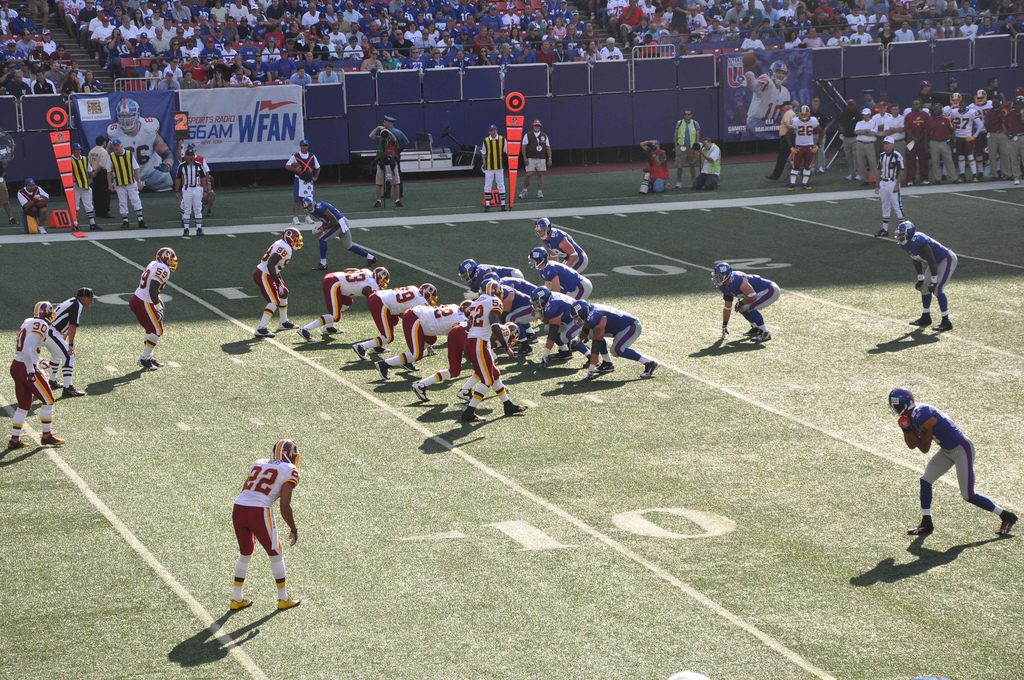 You ready for the biggest understatement of the week? Last week didn’t go so well for the NFL. I don’t think that I need to dive too deep into the gory details, so let’s just cover some of the events in bullet form:

Anyway, on to the Week 4 picks.

Home Teams in ALL CAPS

WASHINGTON REDSKINS over New York Giants
PITTSBURGH STEELERS over Tampa Bay Buccaneers
I’m sick of crappy Thursday Night Football Games, which is exactly what Washington and New York will likely end up being. I’m sick of Tampa Bay always being on television because they are the regional game on FOX, thus depriving me of good NFC games like my beloved Chicago Bears hosting the Green Bay Packers this Sunday. I’m sick of being an Alfred Morris fantasy owner and knowing full well that there are going to be plenty of games where he rushes for 97 yards on 24 carries and has no touchdowns because head coach Jay Gruden gave the ball to Roy Helu at the one yard-line. I’m also sick of being a Vincent Jackson fantasy owner and knowing that the Bucs don’t have a quarterback or a coach that is committed to getting him the ball. Sorry, I’m bitter.

HOUSTON TEXANS over Buffalo Bills
BALTIMORE RAVENS over Carolina Panthers
Pop quiz hot shot: Ryan Fitzpatrick and Steve Smith Sr. are both in Revenge Game scenarios this week. Before this started, one of those two players advised his former fan base to “put your goggles on because there’s going to be blood and guts everywhere.” Who do you think it was? Hint: do you really think someone whose nickname is “The Amish Rifle” would say something like that?

INDIANAPOLIS COLTS over Tennessee Titans
The AFC South is BAD with a capital B, A, and D. I picked the Colts to make the Super Bowl, and sure, it looks like a bit of a stretch at this point, but at least I can sleep comfortably knowing that unless Andrew Luck gets attacked like Nancy Kerrigan, the Colts will definitely win their division. Houston is fool’s gold and will benefit greatly from playing a last-place schedule. Jacksonville has looked totally incompetent over the last ten quarters and Tennessee is, as I put it Week 1, “the ‘Blah Team’ that will finish 6-10, 7-9 or 8-8 and be almost unthinkably uninteresting all season long.” So to recap, Indy has one of the seven best quarterbacks in football and a truckload of targets for him to sling it to. Plus, they’re in a division with fool’s good, total ineptitude, and a “Blah Team”. Again, I’m too not worried.

NEW YORK JETS over Detroit Lions
You can call it wishful thinking or call it an upset pick. It’s actually a little bit of both with a dash of I don’t think Geno Smith is quite as bad as people think he is and I’m not totally sold on the Lions yet.

Miami Dolphins over OAKLAND RAIDERS
Not that it would really matter, but the Raiders are deprived of their home field advantage in this “home game” because it’s being played in London. First of all, holy balls that’s a long plane ride. Over 5,000 miles in fact. How awkward would it be if the Raiders got walloped in London and immediately after the game they fired Dennis Allen … you think he’d come back or just live in England for the rest of his life? I know that’s not a flight I’d want to take, especially if I just learned that I was now unemployed.

Second of all, holy balls this is just a horrible game to give to the Brits. Seriously, they’ll stick with soccer if these are the kind of games the NFL keeps giving them. Jacksonville is going over there later in the year. Yeesh! Some important NFL people must have some resentment towards England for trying to deny us our independence 250 years ago.

CHICAGO BEARS over Green Bay Packers
Can you guys believe it? I’m passing up a golden opportunity for a reverse jinx and actually picking this game based on which team I believe is better at football. You must be proud. Even though the Bears are decimated defensively and probably only three or four injuries away from pulling in fans off the street, they still were able to turn New York and San Francisco over on back to back primetime games. Hey, that’s gravy as far as I’m concerned. I expected the defense to be an atrocity this season and it still might turn out that way, but like I said from the beginning: if the defense can be league average, our offense is good enough to make an extended run in the playoffs.

This Sunday’s game will go a long way in determining whether the Bears are a playoff team or not. Green Bay is quietly on the ropes—1-2, should be 0-3, and neither their offense or defense has looked too stellar so far this year—and a loss at Chicago would be the closest thing to a Week 4 death blow. Am I terrified of picking against Aaron Rodgers? Of course I am! I still remember what happened last year in the final week of the season. You know what Rodgers did to me? Let this old man tell you:

SAN DIEGO CHARGERS over Jacksonville Jaguars
Atlanta Falcons over MINNESOTA VIKINGS
I like both rookie quarterbacks—Blake Bortles and Teddy Bridgewater—much better than the stiffs they are replacing—Chad Henne and Matt Cassel—but I don’t like either of their matchups they have in their first career start. Jacksonville playing any team anywhere has been a complete disaster so far this year, but maybe Bortles rights the ship, pulls the upset, turns water into wine, and then walks across the Pacific Ocean. Bridgewater doesn’t need a miracle. He has a better crop of playmakers surrounding him than Bortles does, plus Atlanta is forced to play outdoors where they are annually shaky. If either one of the two get a W in their first start it will be Bridgewater.

Philadelphia Eagles over SAN FRANCISCO 49ERS
DALLAS COWBOYS over New Orleans Saints
Is there any chance that two teams from the lowly NFC East are better than two of the pre-season NFC favorites? I think on Sunday we find out there is. I was dubious about New Orleans before the season. I didn’t think their offense would be as explosive as it was in the recent past and I didn’t trust that their defense would be noticeably better. Through three weeks it’s looking like I was right on both counts. San Francisco is the bigger surprise to me. Good football teams don’t go three consecutive games without scoring a second half touchdown. By use of the transitive property—or some other goofy ass math term that I have no need for at this point in my life—that leads me to believe San Francisco isn’t a good football team.

KANSAS CITY CHIEFS over New England Patriots
Because I needed another upset pick for the week. Because Arrowhead at night should be alive and a difficult place to play on a Monday night. Because the Patriots worried me last week against Oakland. Because Kansas City has looked frisky ever since Week 1. And because I really like Knile Davis, probably too much. Now excuse me, I have to catch a flight to Chicago so I can see if I can get a workout in with the team before I start at strong safety for them on Sunday.