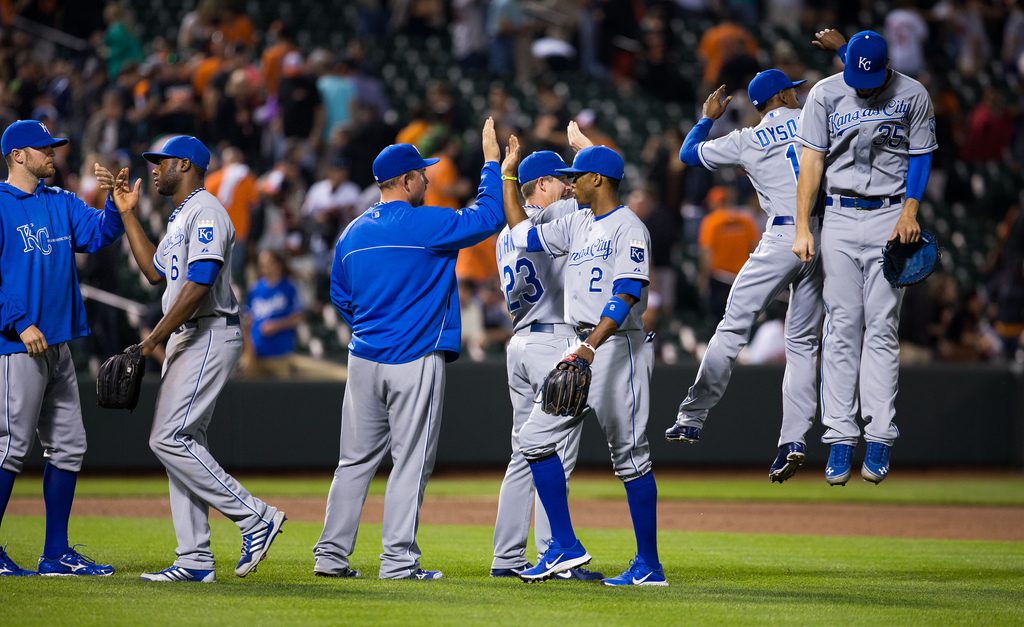 The Kansas City Royals have a strong chance of winning the World Series. After not making the playoffs since 1985, then being down 7-3 against the Oakland A’s in the eighth inning of a one-game playoff, let that proposition sink in for a moment.

In spring training, various experts noted the Royals potential to be a playoff team. I doubt that any of them anticipated Kansas City being a World Series team. With a commanding 2-0 lead against the Los Angeles Angels, the darlings of baseball are set to have James Shields on the mound for Game 3 at home. It would be shocking at this point if they were to do anything but finish the Angels off with a sweep.

Why are the Royals suddenly a great team? In a word, matchups. The Royals are an incredibly difficult team to matchup against in a short series. Their speed is dangerous in all facets of the game. It allows them to reach on bunt hits, steal bases, and catch nearly everything defensively. It also puts immense pressure on their opponents. Whether it’s Alcides Escobar at the top of the lineup or Jarrod Dyson off the bench, Kansas City runs wild.

Think about what speed does on defense. Anything in the relative proximity of the Kansas City outfield will be caught. Nearly anything on the ground in the infield will be fielded and turned into an out. Alex Gordon is the best defensive left fielder in the game, Lorenzo Cain covers as much ground as any center fielder, and Nori Aoki has a knack for making unreal catches in right field. Dyson, another player who thrives defensively, is often substituted into the outfield late in games. Escobar is an elite defensive shortstop and Eric Hosmer has Gold Glove talent at first base. That’s defensive depth throughout the entire field.

On offense, the Royals speed is also a unique beast. They steal early and often. They bunt regularly and do it well. With a runner on third and less than two outs, they bring home that runner more than nearly any other team. Fast runners, contact hitters, and selfless team players is a recipe unique to Kansas City. No other team has that blend. Beyond just their running ability, they also have professional hitters like Billy Butler and Omar Infante. Salvador Perez is a free swinger who comes up clutch in big moments. Hosmer is growing increasingly dangerous at the plate. Their offense won’t bury a team with power, but they will infuriate and ultimately defeat a team with speed.

An additional aspect of Kansas City’s success is their bullpen. We’re not talking about a quality bullpen with a good closer, we’re talking about a series of dominant relievers that effectively end the game once the seventh inning is reached. Kelvin Herrera, the usual seventh inning pitcher, was recently diagnosed with a slight flexor strain. Hopefully he’ll return for Game 3. He had a 1.41 ERA and didn’t allow a home run all season. Wade Davis, the common selection for the eighth inning, had a 1.00 ERA this year, 109 strikeouts, and also never surrendered a home run. And if Herrera and Davis weren’t tough enough, the Royals have Greg Holland for the ninth inning. He’s only the best closer in baseball.

On top of an elite running game and an outstanding bullpen, Kansas City also has a couple of great starting pitchers. Shields is obviously the staff’s ace and justifiably so. He’s an innings machine who has a devastating fastball and change-up combination. Yordano Ventura, who was lights out in Game 2, throws 100 MPH fastballs and mixes in a wicked breaking ball. His effortless release and extreme velocity is essentially pitching perfection. The other starters won’t blow a team away, but Jason Vargas has been effective and Jeremy Guthrie is a capable veteran. The top of the rotation is imposing and the rest of the rotation is deep.

With a pesky lineup that’s fast, a bullpen that’s dominant, and a starting rotation that’s strong at the top and formidable in the middle, it truly shouldn’t be surprising if the Royals win the World Series. Despite a lack of playoff experience, their team is constructed for October glory. Given the fact that they haven’t made the playoffs since 1985, doesn’t that statement come across as shocking? It should. But the truth in that statement is what makes it so crazy.

The Royals should eliminate the Angels quickly and matchup well against either the Baltimore Orioles or Detroit Tigers. Their style should also matchup well against any National League squads too. After all, the Royals are an American League team that plays the best National League style in the MLB. Is Kansas City a team of destiny? Perhaps. But if they end up winning it all, their speed, bullpen, and starting pitchers would’ve been the creators of that destiny.