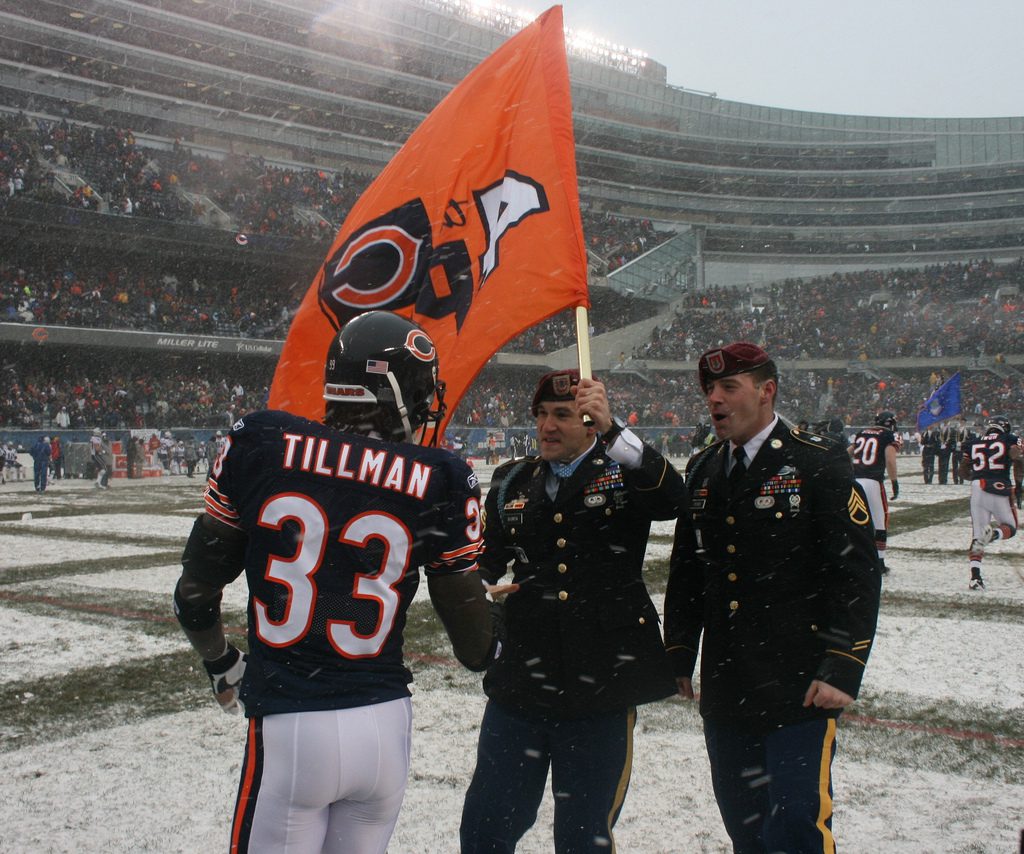 What is almost more disappointing that the player’s actual actions, is the immense publicity they receive for it. At this rate, Ray Rice will probably sign a book deal and, in a matter of months, shelves will be stocked with hardbacks reading: “Trapped in an Elevator: 10 Steps to Dissipating Marital Anger.”

There are, however, good men in this league of presumably tarnished players. There are honorable, philanthropic, caring, generous players who work just as hard off the field as they do on. Below are just a few of many NFL athletes most deserving of public attention. These men go above and beyond the call of duty to impact the community in a positive way.

During his ten years in the league as a wide receiver for the Arizona Cardinals, Fitzgerald has set a high bar for players striving to make a positive difference on and off the field. The 31-year-old has set dozens of records, including becoming the youngest player to surpass 11,000 receiving yards and the most receptions, touchdown receptions and receiving yards in the postseason. These accomplishments, however, hardly compare to those he’s reached off the field.

In 2005, Fitzgerald established the Larry Fitzgerald First Down Fund, a not-for-profit organization that provides money, resources and time to children and families in need across the nation. The foundation’s mission is to support, encourage and assist children and families in leading happier healthier lives. In 2011, the fund donated $10,000 to the Southern Arizona American Red Cross for wildfire relief efforts. This donation alone prevented the homelessness of nearly 10 families. During the 2011-12 season, the First Down Fund pledged to donate $1,000 a week to a fan’s charity of choice.

In 2003, Fitzgerald lost his mother, Carol, to a hard-fought battle with breast cancer. To recognize the values she instilled in his life, Fitzgerald founded the Carol Fitzgerald Memorial Fund. The fund honors subjects of importance in Carol’s life: the support of African American women fighting breast cancer, supporting, informing and preventing HIV/AIDS among African Americans, and the support and encouragement of education for urban children. In 2010, Fitzgerald and the Carol Fitzgerald Memorial Fund donated $10,000 to the African-American Breast Cancer Alliance in Minneapolis, MN. The league also named him spokesperson for Breast Cancer Awareness Month in 2010.

Some players may consider establishing two foundations enough, but Fitzgerald hardly stops there.

In 2011, he teamed up with Pros for Africa, a non-profit organization that encourages all professionals to “spread enthusiastic and loving volunteer work throughout the whole of Africa” and the Starkey Hearing Foundation. Fitzgerald, along with a handful of other NFL players, traveled to Kigali, Rwanda to deliver 22,000 hearing aids to those in need.

Again, in 2012, Fitzgerald joined the Starkey Hearing Foundation on a mission to Malaysia. During this trip (his tenth with the organization) Fitzgerald helped to fit 2,600 adults and children with hearing aids. Though the language barrier prevented athletes from conversing with patients, Fitzgerald was able to use clapping, humming and singing to test the accuracy of the aids.

During the off-season, he has traveled to India, Thailand and the Philippians, on mission trips to support economic development in rural areas.

In April of 2014, the First Down Fund hosted the 4th Annual Double Play Celebrity Softball Game. For $15 a ticket, fans watched famous athletes, movie stars and musicians swing for the fences and run the bases. Proceeds from the event went to First Down Fund and the Carol Fitzgerald Memorial Fund.

The Larry Fitzgerald First Down Fund hosts an annual Fit’s Supper Club where guests gather at a local steakhouse in Scottsdale, AZ to be lavishly waited on by Fitzgerald and other celebrity guests. This past August, nearly 200 guests gathered for the occasion and raised over $300,000 for the First Down Fund. All proceeds go to the support of several youth organizations across the nation.

For current and past info on the positive difference Fitzgerald is making in the community, visit his webpage.
Click here to learn about of the honorable awards he has received over the years.

Though the Washington Redskins linebacker has only been in the league for three years, Ryan Kerrigan’s philanthropic values have highlighted him as a stellar community member. In fact, just last month Kerrigan was recognized for making a positive impact on the D.C. community by being named the NFL Players Association Community MVP. His munificent efforts further justify this honor.

In 2013, Kerrigan launched the Ryan Kerrigan’s Blitz for the Better Foundation, an organization that provides resources, support and opportunities for children and families in need in the Greater DC area. The foundation’s main outreach is toward mentally, critically and chronically ill children and families.

Last year Kerrigan organized the first annual Ryan Kerrigan’s Celebrity Waiter Night. After trading in their jerseys for aprons and serving steak instead of touchdown passes, Kerrigan and several of his teammates raised over $100,000 by hosting and serving dinner to nearly 180 guests. This year was no different. During the second annual Celebrity Waiter Night, the players donned their waiting attire and proceeded to raise, once again, over $100,00. Kerrigan has previously pledged to match up to $15,000. All of the proceeds went directly to the Blitz for the Better Foundation.

Last March, Kerrigan’s Redskins and Torrey Smith’s Baltimore Ravens traded cleats for sneakers and shoulder pads for basketball shorts during the annual Battle of the Beltway. This All-Star basketball game drew nearly 5,000 fans as the players battled for bragging rights and made slam-dunks for dollars during this fundraiser that raised nearly $100,000. Kerrigan’s Blitz for the Better Foundation and the Torrey Smith Foundation split the proceeds between the organizations.

In the spring of 2015, Kerrigan is planning to launch Kerrigan’s Korner in the Children’s National Health Systems. The Korner will contain lockers for extended-stay patients that are full of iPads, Gameboys, movies, board games and more. He wants to make their stay more comfortable and kid-friendly.

To read more about the Blitz for the Better Foundation, to get involved or to donate, visit the foundation’s webpage.

Since being drafted by the Chicago Bears in 2003, Tillman’s impact both on and off the field in Chicago has been unprecedented. As a Chicago player, he holds the Bears’ record for the most defensive touchdowns to date. During his time with the Bears, he has made eight interception return touchdowns – the most Bear’s history. Tillman is the first Bears cornerback to be chosen for back-to-back Pro Bowls. In 2013, he was named Walter Payton NFL Man of the Year, an award that recognizes a player’s volunteer and charity work in the community, as well as his mastery in the game. Though the list of Tillman’s accomplishments on the field proves his worth as a player, his philanthropic way of life proves his passion for the community.

When he and his wife initially founded the organization, their mission was to provide educational opportunities and resources to children and families in need in the Chicago area. However, after their three-month-old daughter was diagnosed with a rare heart condition in 2008, the foundation shifted their focus to critically or chronically ill children and their families. In the past ten years, the foundation has reached over one million children in the Chicago area.

Cornerstone doesn’t cater solely to children, either. On June 7th, 2014 Tillman hosted the sixth annual TendHER Heart Luncheon, which honored 150 mothers who have sacrificed their lives for their critically or chronically ill children. The luncheon provided a comfortable environment for mothers to empathize, lend advice, and provide support for one another.

Every year since 2011, the Cornerstone Foundation rents out Kings Lanes bowling alley in order to host the annual Charles Tillman Celebrity ProBOWLER Tournament. This tournament invites members of the community to bowl on teams with several current and former Bears players and all proceeds go directly to the Cornerstone Foundation. Over the past three years, the tournament has raised hundreds of thousands of dollars for underprivileged children and families.

Though establishing The Cornerstone Foundation manifests his benevolence, Tillman’s humanitarian efforts don’t stop here. As the son of an Army sergeant, he has always demonstrated great consideration for the men and women protecting our nation. In 2012, Tillman was rewarded the Salute to Service Award, an award presented by USAA to recognize members of the NFL who make exceptional efforts to honor and support individuals who currently or have formerly protected our homeland. The examples below are just a few on the extensive list of Tillman’s military support efforts.

– In 2010, Tillman embarked on an eight-day tour to Iraq and Kuwait to visit and thank troops abroad.
– In 2012 he donated a “Charles Locker” the VA hospital in his hometown of Fort Hood, Texas. The locker contained iPads, laptops and gaming systems to help patients during recovery.
– In 2013, while at the Pro Bowl in Hawaii, he spent time visiting service members at the Schofield Army Barracks
– Thanksgiving 2013, the Tillman’s delivered dinner to sailors who couldn’t leave their posts at the Great Lakes Naval Station in Chicago.
– During the 2013 season, he provided soldiers game-day tickets to Soldier Field, only to then generously give away Super Bowl Tickets to a family who lost their son during the war in Iraq.

To learn more about the good Tillman is doing in the local and nationwide community, visit his foundation page.