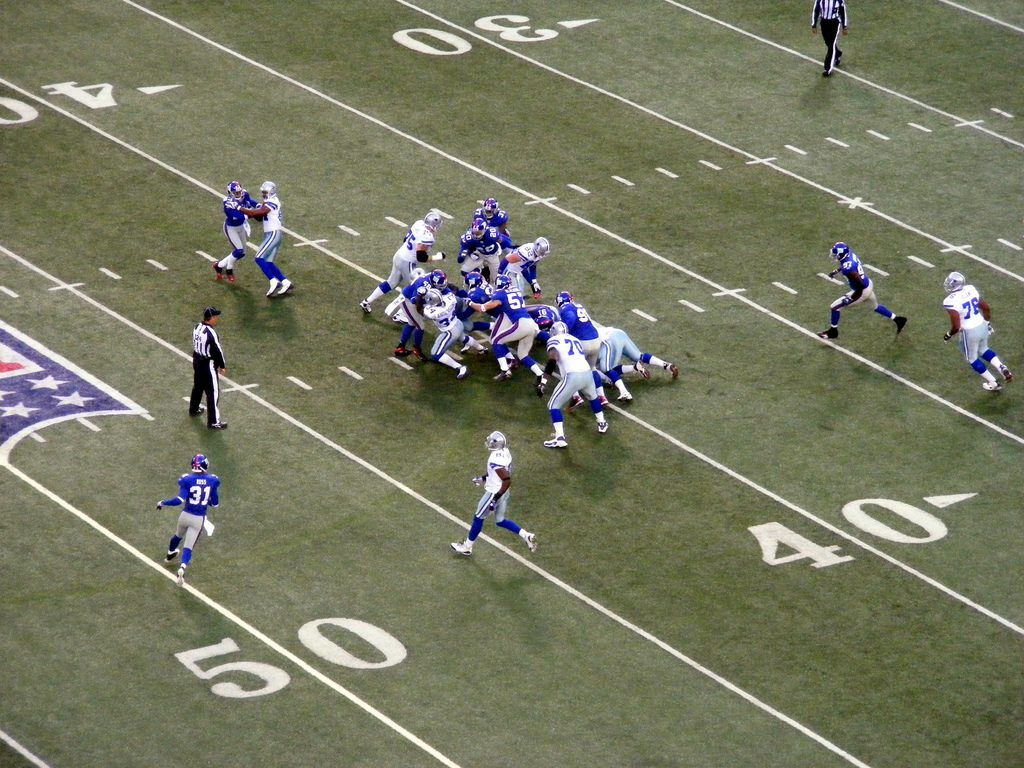 This Sunday the Dallas Cowboys will host the New York Giants for the 105th time. Dallas leads the all time series 59–43–2. Dallas comes in sporting a 5–1 record, coming off a huge road win over the defending Super Bowl champions. The Giants limp into the contest nursing a 3 – 3 record, reeling from a shutout loss to the Eagles. The Giants will also be without the services of their pro-bowl wide receiver Victor Cruz. Some of the Eagle players are still speaking about how haunting his screams were on Monday night. On paper, I’m surprised the spread is only 5.5 point in favor of the Cowboys. Last year the boys from big D were not great, and they managed to beat the Giants twice, and this year they look great.

All this leads me to believe that this is the classic case of an NFL trap game (much like the Browns against the Steelers last week, or even Dallas beating Seattle). The Giants have no business even thinking about winning this game, and yet I have the sneaky suspicion they will. For the record I am actually a Cowboys fan. I grew up watching Emmitt Smith and Troy Aikman win super bowls and dominating the regular season. Those teams are an eternity ago, but rather than be labelled a bandwagon jumper I decided to stick with the team that had given me so many fond memories. With that out of the way let’s break down how Jason Garret and the Cowboys are going to muck this game up.

1. Winning the line of scrimmage: Dallas’s defensive front has played well, and the Giants present a patchwork offensive line. Rod Marinelli might get cocky here, and not bring enough pressure to keep Eli Manning uncomfortable, as the receiving corps might be one he feels his guys can handle 1 on 1. The linemen for the Giants have to do a good enough job of holding their ground to force the Cowboys to bring extra men on the blitz, and Eli has to make them pay when they do. They also have to be able to run the ball with enough success to keep the linebackers in the box, opening up holes for the tight end Larry Donnell. On the flip side the Dallas O-line has looked ROCK solid, as Demarco Murray is running anywhere he pleases. The Cowboys lost starting right tackle Doug Free at the end of the Seahawk game. Dallas will try to run left, behind pro-bowl left tackle Tyron Smith, but if the Giants can keep the yardage short blitzes from the right side should prove to be glutton for sacks.

2. Texas turnovers: Dallas is giving the ball away so much you’d think that they were worried it had Ebola on it. Murray is leading the league in yards and fumbles, and Romo doesn’t mind handing out an interception or two. This is more about letting the Cowboys beat themselves by letting Murray handle

the ball often, and making sure there is a little pressure on Romo. Do those two things and the ball will come to you. Turning the table the Giants have to make sure they don’t turn the ball over themselves. Fumbles haven’t been an issue for the backfield in New York (technically New Jersey), but Eli has been known to give up a bad pick as often as Romo. You cannot giveth New York, only taketh away.

3. Free range Tight End: Dallas has played much better than expected all year on defense, but the Tight End position has given them fits. Larry Donnell had that one amazing breakout game against the Redskins, but hasn’t done a heck a lot since then. Eli needs to have Donnell’s number on speed dial this week as the disjointed linebacking platoon in Dallas still looks to come together as a unit.

4. Keeping the “special” out of “special teams”: Dallas has two of the better special teams weapons in Dwayne Harris and Dan Bailey. Bailey nailed a 56 yard field goal last week in Seattle, and Harris, well Harris had a less spectacular game. The Giants haven’t looked amazing on special teams this year, allowing some large returns on punts and kickoffs. Keeping Harris contained is going to help the team win the field position battle, and that might be enough to keep Bailey out range.

5. Own the clock: In all but one of the Dallas victories this year the Cowboys have had the edge in time of possession. Much of that has to do with lengthy drives with much running by Mr. Murray, and a ridiculous third down conversion percentage. For those of you curious, the league average is about 45%, and Dallas is clicking at 56%. Now the Giants defense has one of the better defensive third down percentages at 32%, so that should be a fun battle to watch. The point here is that the Giants need to get the Cowboys offense off the field, and keep them off the field. You do that and you limit the chances this team (or any team really) has to put up points.

Of course all of this means very little. Dallas has the five and a half point spread because they are the better team. There is no statistical reason to think this game doesn’t finish 27 – 20 for the Cowboys. However, that is the exact reason I feel like it will finish 30 – 17 for the Giants. Call it a gut feeling, a regression to the mean, or just me being stupid, but I just feel like this is the classic trap game. The Cowboys reduce their focus, and the Giants take full advantage of it.