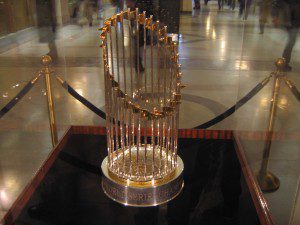 During spring training, who had the Kansas City Royals and San Francisco Giants squaring off in the World Series? Beyond that, when the regular season ended and the one-game playoff matchups were set, who had either team making an October run to the Fall Classic, let alone both?

With the Royals 8-0 and Giants 8-2 in the 2014 playoffs, that reality is here. Kansas City will win its first World Series since 1985 or San Francisco will win its third in five years. In an exciting matchup of unpredictable pennant winners, here’s a preview of which team has the edge in the categories of starting pitching, bullpen, defense, and game management. The combination of these four aspects will determine who prevails as a champion. Note that offense, being an essential deadlock between these teams, isn’t discussed as that facet should even itself out.

Starting Pitching
Kansas City has an interesting collection of starting pitchers. James Shields, the ace who owns a largely undeserved nickname, “Big Game James,” has allowed 10 earned runs in 16 innings of these playoffs. His career playoff ERA is 5.19. The Royals need him to find his command and rediscover his lethal fastball and change-up combination. Yordano Ventura is lined up after Shields. He pumps 96-100 MPH fastballs that display movement seemingly beyond his control. The Giants could potentially feast on his nerves and erratic style. He’s often prone to wild tendencies. Jason Vargas and Jeremy Guthrie, two veteran soft-tossers, round out the rotation. They throw off-speed stuff in fastball counts and rely on control to get by.

San Francisco has the superior ace in this showdown. Madison Bumgarner, a 25-year-old lefty emerging as the best big game pitcher in baseball, has already logged 31.2 innings in the 2014 postseason. Only five earned runs have been surrendered in that span. The Giants also have depth up and down the rotation. Jake Peavy has been a revelation since coming to San Francisco, Tim Hudson will eagerly make his first career World Series start, and Ryan Vogelsong is a capable veteran who often shines in the playoffs. The downside to Peavy, Hudson, and Vogelsong is the fact that they’re similar. All are right-handed pitchers with low-90s fastballs, down and away strike zone attacks, and a lack of a devastating secondary pitch. This familiarity could benefit Kansas City.

Edge: Giants. With the middle of the rotations too close to call, Bumgarner is the clear tiebreaker. He’s the ideal pitcher to have for multiple games in a series. He might also help San Francisco steal Game 1 in Kansas City.

Bullpen
The Royals have the best bullpen in the MLB. Its late-innings trio of Kelvin Herrera, Wade Davis, and Greg Holland might be the best group of relievers in baseball history. Sound grandiose? Check the numbers. 1.41 regular season ERA for Herrera, 1.00 for Davis, and 1.44 for Holland. That means Holland, the best closer in baseball, put up the worst ERA of this legendary threesome. Herrera and Davis haven’t surrendered a home run all season. Holland saved 46 out of 48 possible games this year and already has six saves in the playoffs. If the Giants do any damage against this group, look for it to be with Herrera on the mound. He’s the youngest and most erratic of the three. Herrera’s opponents hit .214 against him, a low number that’s nevertheless significantly higher than what Davis or Holland posted.

San Francisco’s bullpen has set roles and extensive playoff experience. Even though they lack the power of Kansas City’s relievers, they still succeed in pivotal moments. Jeremy Affeldt is a rare southpaw who is favorable in any sort of matchup. Javier Lopez is a more prototypical lefty specialist who should face off against Eric Hosmer, Alex Gordon, and other Royals’ lefties. Sergio Romo has locked down the eighth inning and Santiago Casilla is an underrated closer for the ninth. These pitchers don’t throw 95-98 MPH heaters like the studs in the Royals’ pen, but they’re pinpoint with command and rarely award free passes. Also keep Yusmeiro Petit in mind. He’s a long reliever capable of spelling a struggling starter if necessary.

Edge: Royals. Herrera, Davis, and Holland are late-game monsters. This trio is the equivalent of having three dominant closers in one bullpen. It’s hard to imagine Kansas City losing four games with these horses available.

Defense
Kansas City does more work with the glove than any team. Alex Gordon sets the bar for left field supremacy. Next to him stands Lorenzo Cain, a speedster who covers more ground than any center fielder. Nori Aoki is dependable in right with an underrated arm. He’s removed late in games for Jarrod Dyson, a switch that puts Dyson in center and shifts Cain to right. Dyson is a speed demon and valuable late-game asset. In the infield, Mike Moustakas is quickly emerging at third and Alcides Escobar is a phenomenal shortstop with the glove. Escobar has a strong arm and excellent positioning skills. Omar Infante does slick work at second base and Eric Hosmer is a wizard at first. There’s also Salvador Perez, a smooth catcher who handles pitchers better than anyone in the American League.

The Giants are also one of the best defensive teams in the MLB. Left field is the only area of weakness with NLCS hero Travis Ishikawa playing that role. Gregor Blanco is elite in center and Hunter Pence is the same in right. Both roam and thrive in an outfield that’s one of the most difficult places to play in because of a deep gap in right center. Infield wise, Pablo Sandoval has improved to become an acceptable defensive third baseman. Brandon Crawford‘s errors are deceiving as he remains a Gold Glove type of shortstop. Joe Panik and Brandon Belt round out an infield with no glaring weaknesses. San Francisco also has Buster Posey, a strong-armed catcher who can help contain the opposing running game.

Edge: Royals. They have the best group of defenders in baseball. Range all over the infield and unique speed in the outfield. This unit is well-suited to play in the large Kansas City and San Francisco ballparks.

Game Management
Ned Yost, the commonly criticized manager of the Royals, is rarely given credit and frequently showered with blame. He’ll pull a starter far too early or far too late, he’ll bunt with nearly anyone in the lineup, and he’ll stubbornly stick to his guns even after they fail on an epic scale. However, throughout this season, most of his decisions have worked. Putting Escobar in the leadoff role during September acted as a catalyst to offensive success. Batting Moustakas ninth in the order has given Kansas City a rare power threat in the back of its lineup. Yost also plays to team strengths of defense and speed. The only expected substitution he’ll make is Dyson in favor of Aoki. He sticks to what’s been successful and understands his personnel.

Bruce Bochy is quite easily the top manager in the game. A future Hall of Fame skipper with a marvelous pedigree, Bochy has a golden touch in the postseason. He utilizes his bench better than any manager. Michael Morse, Joaquin Arias, and others are put in a position to succeed. Bochy also gives defined roles to a bullpen that’s not exceptionally talented. Specific late-game roles out of the pen is a critical component during the playoffs. Appointing Casilla as the closer has worked out wonderfully. Having Ishikawa’s bat in the lineup has been a stabilizing force. Most notably, sticking with Panik at second base despite initial struggles proved to be brilliant. The Giants wouldn’t be in the World Series without Panik providing stability at second. Give Bochy credit for having faith.

Edge: Bruce Bochy. He steers clear from a reliance on advanced metrics and goes with his gut. He also places trust in his players, a trait that gives the Giants the best team chemistry in baseball.

Predicting a Winner
With each team having an edge in two of my four critical categories and offense being an essential tie, this series can justifiably be referred to as a toss-up. This is an unpredictable Fall Classic because, in part, each team has displayed unpredictability in the truest sense. In picking a winner, look towards the signs in the Royals’ favor. Power arms in the bullpen, a defensive unit that catches everything, and an offense that’s heating up at the perfect time. The Giants’ playoff success has been remarkable, particularly due to its creative methods of scoring runs. In this matchup though, look for Kansas City to create just enough offense prior to handing the ball to the bullpen. Herrera, Davis, and Holland will cap off a historic season with a final showing of stellar pitching in the World Series.

Pick: Royals in six. Kansas City will have a champion for the first time since 1985, largely due to timely hitting and a legendary group of relievers.