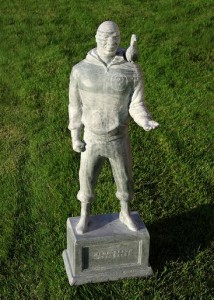 Adult Swim announced today the upcoming launch of the official Mike Tyson Mysteries Scavenger Hunt Mystery, which will invade 10 major U.S. cities beginning Saturday, October 25th, and running through Monday, October 27th. Fans who participate in the hunt will have the chance to score their own exclusive 2-foot-tall Mike Tyson mini-statue as well as exclusive show prizes in an online sweepstakes.
To start the quest, fans can go to AreMysteriesReal.com and play the scavenger hunt trivia game to unlock the locations where the mini-statues are hidden in their city. Each correct answer narrows down the location and once the player has correctly answered all the questions, directions are given on where to find the Mike Tyson mini-statue out in the real world.

Once a player has claimed a mini-statue, an onsite representative of Mike Tyson Mysteries will take their photo to be added to the official online map for the ultimate bragging rights. Only 100 mini-statues will be hidden across the country, so fans will need to solve this mystery fast if they hope to ever get their hands on one!

Fans who do not have a mini-statue hidden in their city will still have the opportunity to join the hunt by entering an online sweepstakes at AreMysteriesReal.com to win a Mike Tyson mini-statue or an exclusive Mike Tyson Mysteries action figure.
Participating cities include:

In Mike Tyson Mysteries, Mike Tyson is taking the fight from the boxing ring to the streets … by solving mysteries! Aided by the Mike Tyson Mystery Team — the Ghost of the Marquess of Queensberry, Mike’s adopted Korean daughter, Yung Hee, and a pigeon who was once a man — Mike Tyson will answer any plea sent to him. If you have a problem that needs solving, Iron Mike is in your corner. The gloves come off in this quarter-hour series as the former heavyweight champ and his team gears up for weekly adventures as they put unsolved mysteries down for the count. The new quarter-hour animated comedy series premieres on Monday, October 27th at 10:30 p.m. ET/PT on Adult Swim.
Mike Tyson Mysteries stars Mike Tyson, Norm Macdonald (Saturday Night Live), Rachel Ramras (MAD) and Oscar® winner Jim Rash (The Way Way Back, Community), and is produced by Warner Bros. Animation. Sam Register (Teen Titans Go!, MAD, The Looney Tunes Show) serves as executive producer with Hugh Davidson (MAD, The Looney Tunes Show, Robot Chicken) as producer.