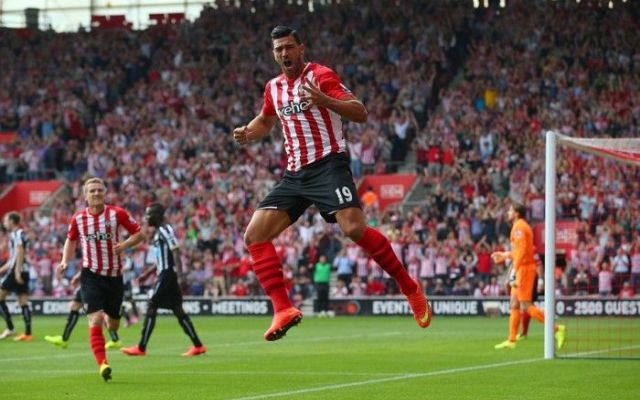 As the Premier League enters its ninth week of competition, one out-of-place team looks to be cementing their position in the top four. Among enduring top teams Chelsea and Manchester City, sits Southampton FC, a team who many thought had sunk themselves before the season began. Former Dutch International and new Saints manager, Ronald Koeman started his reign (with his brother, Erwin, assisting at his side) by selling off six players to other top English clubs—five of whom were rated among the team’s best-performers in the previous season. To call this a risk is to diminish the chutzpah involved. Fan favorites, Rickie Lambert, Adam Lallana and Dejan Lovren were allowed to join Liverpool and add nearly £50 million back into the Southampton coffers. Luke Shaw joined Manchester United’s defensive lineup for £30 million, a world record for a teenager (breaking a previously-held record by new teammate, Wayne Rooney). Right-back Calum Chambers joined Arsenal as a jack-of-all-defense for somewhere in the neighborhood of £16 million.

With nearly £100 million in sales, Ronald Koeman spent around £60 million for his choice of replacements. Goalkeeper Fraser Forster joined from Scottish club Celtic to mind the Southampton net. Serbian midfielder Dušan Tadić signed from FC Twente to replace Lallana, striker Graziano Pellè left Feyenoord Rotterdam, and Shane Long journeyed four hours south, down the M1, from Hull. Defender Florin Gardoș joined from Steaua București. Koeman rounded out his back four with two enviable loan signings in Chelsea FC left-back, Ryan Bertrand and central defender, Toby Alderweireld from Atlético Madrid. Midfielder Sadio Mané joined Southampton on the last day of the 2014 transfer window from Red Bull Salzburg. A likely question from Saints’ supporters would’ve been, “Apart from the loan signings, who are these guys”? A greater question, “Will these virtual no-names be able to replace our favorite players”? It wasn’t long before Ronald Koeman’s plan would produce results.

Southampton’s opening fixtures saw them reunite with their former players quicker than they would have expected. It was a start that only FIFA could arrange through bribes and threats. The Saints traveled to Anfield to see Rickie Lambert and Dejan Lovren in new red jerseys. While the Liverpool new-boys won the match 2-1, Southampton looked promising for most of the match. Morgan Schneiderlin came within half-a-Schneiderlin of equalizing before the final whistle blew. But Saints fans saw the new potential in their team and eagerly awaited what the next matchweek would bring when West Bromwich Albion came to St. Mary’s Stadium.

West Brom frustrated Southampton by playing a defensive game and a scoreless draw left the bitter taste of anticlimax in the mouths of Southampton supporters. While too soon to say, many fans couldn’t help but wonder if this experiment of Koeman’s was going to be a disaster. Luckily, the Saints’ luck changed and the next four matches added 12 points launching them into second place. Decisive three, and four goal wins, aided by Morgan Schneiderlin’s three over West Ham United and Newcastle United, coupled with narrower victories versus Swansea City and Queens Park Rangers, relaxed the Southampton faithful. Pellè was proving to be as prolific a scorer as Chelsea’s Diego Costa. The meeting that followed was one that Southampton fans, and likely players, were relishing – an away trip to White Hart Lane where a reunion with former manager, Mauricio Pochettino awaited.

Pochettino left Southampton for Tottenham Hotspur FC two weeks after the end of the 2014 season after a year-and-a-half at St. Mary’s. Some fans applaud him for the team’s success in that season. Others see a legacy not as impressive, pointing to his three big transfer moves as ultimate failures. At the start of last season, Pochettino spent approximately £36 million on Dejan Lovren, Victor Wanyama and Dani Osvaldo. Lovren was a sell-on success, profiting the club around £11 million with his departure to Liverpool. But fans questioned spending £12.5 million on Wanyama, a player who couldn’t notch a goal the entire season. Dani Osvaldo wasn’t cut out for the physical English game and was soon loaned out to Italy where he eventually signed for Inter Milan. Recouping Osvaldo’s transfer fee of £15 million, in particular, is unlikely and is cause for the initial anger directed at Pochettino. However, on the day that the Reds visited their old manager, Pochettino was the winner as Tottenham took all three points. Hugo Lloris, Tottenham’s goalkeeper, saved everything directed his way and many shots just missed their target. Sadio Mané shot wide from close-range, but Christian Eriksen’s strike proved to be the winner.

The next match in Southampton’s fall run took place at St. Mary’s last Saturday when lowly Sunderland slunk down 300-odd miles for a trip they likely would’ve rather forfeit. Though no strangers to heavy scoreline’s (having lost by the same margin to Sheffield Wednesday FC in 1911, West Ham United FC in 1968 and Watford FC in 1982), it was the first time Sunderland had lost 8-0 in the Premier League. Starting the crushing defeat was a gorgeous Santiago Vergini volley into the top corner. Not quite, but close to goal of the month material. However, unlikely to receive the award as it was into his own net. Watching the video over and over again, you can’t help but hear the voice of Bart Simpson in your head saying “You can actually pinpoint the second when his heart rips in half.” Though he’s referring to Vito Mannone instead of Ralph Wiggum in this case. Following this blunder, Graziano Pellè easily scored from close, followed by Jack Cork potting another off a cross from Dušan Tadić.

The second half opened like the first with another Sunderland own goal. This time, Liam Bridcutt zombie-stumbled the ball into the net after poor Vito Mannone got his hands on a Pellè shot that caromed into the feet of the midfielder. Graziano Pellè was spot on with his next attempt. Mannone was his own worst enemy for the next goal when – I can’t even describe it as a clearance – he accidentally tapped the ball to Tadić, who lobbed it over the keeper’s head. Had Vito Mannone put 5% more power into his kick, a goal would’ve surely been avoided, even though five goals instead of six would’ve still been abuse at that point. Victor Wanyama scored his second of the season, Southampton’s seventh of the game. Sunderland looked more like a head-rubbing team than a soccer team at that point. To end the afternoon with a nice round number, Sadio Mané scored a goal that, in any other match where a team wasn’t so thoroughly battered emotionally, likely would’ve been cleared. Only an unrepentant sadist could take pleasure in Sunderland’s pain. While Southampton didn’t look like they weren’t going to score several goals, three came courtesy of Sunderland players. This isn’t stated to diminish the offensive tear that the Saints are enjoying. The goal scorers in this match have been active so-far this season. Graziano Pellè is second in scoring in the League while Jack Cork and Morgan Schneiderlin have three each. More goals from Victor Wanyama and Dušan Tadić should be expected.

With Southampton’s success, it becomes easy to ignore the departure of their former players but many supporter’s will still wonder ‘what could’ve been’ if the players hadn’t left. Adam Lallana started the season injured for the first six weeks. He’s back now with a single goal in five appearances. Calum Chambers is making an impact in Arsenal’s paper-thin back four in many ways, but sat out last weekend’s match after accumulating his fifth yellow card, the first player in the Premier League to do so this season. Luke Shaw spent a month in the treatment room and has only recorded stats of two appearances. Rickie Lambert, who broke Saints’ hearts to fulfill a dream, has played in six matches and has yet to make an impact for Liverpool. Dejan Lovren is working to organize the Liverpool defence but seems to be struggling. Following the team’s narrow win vs. Queens Park Rangers, he was quoted as saying “a lot of things are not right” in reference to his new team. Scousers seem to be affronted by his remarks and point the finger back to his own inconsistencies.

The next four matches against lesser foes could see Southampton challenge for the right to be top of the table. This coming weekend, they face former reprobate troglodytes Stoke City FC. The following two weeks take them to Hull City before hosting Leicester City FC. They’ll need to gain maximum points as the remainder of the year pits them against stronger teams with respites versus Crystal Palace and Burnley. They do have the short history of this season to look to for inspiration, however. As mentioned before, the players are doing their individual jobs well while gelling like a team should. They’ve already strung together a long win streak. They scored more in a single match than any other team. Fraser Forster has kept the most clean sheets this season, and the team closed September with Manager and Player of the Month awards. That’s a lot of positives to tie together for this little Hampshire team with half-a-dozen new players and a brand new coaching staff. Saying that they haven’t found their feet doesn’t look accurate, but to their opponents, the thought that they have more room for improvement should be something to fear.