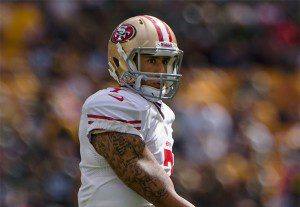 The chances of the San Francisco 49ers making a Superbowl appearance on February 1st 2015, are slim at best. Let alone making a serious playoff run to reach the NFC Championship stage yet once again. Sitting with a record of (5-4) in their respective NFC Western division, bay area fans can only hope that the Niners can turn their choppy season around full circle.

Jim Harbaugh‘s club has now lost four games in the 2014 season, with a record of (12-4) in 2013, the scarlet and gold are literally striving to make sure they play each regular season game as if it were their last. Especially, with the almighty Arizona Cardinals (8-1) and the vulnerable yet successful Seattle Seahawks at (6-3); the Niners have every reason to remain focused and poised at all times.

Within the span of their two-game losing streak against the Denver Broncos and the St. Louis Rams, the bay area gold miners had been struggling to find their offensive identity. Whether that may be a trigger-happy aerial approach or the vintage west coast power-run scheme; there is no absolute consistency in regards to the complicated play-calling. Could the overall issue be Greg Roman’s decision-making in general?

Despite having the unlimited inventory of weapons on the field in (Stevie Johnson, Vernon Davis, Michael Crabtree, Brandon Lloyd, and Boldin), Colin Kaepernick is still finding some trouble to keep his offensive line on the field. This is partly due to the fact that the UNLV alumnus has not developed the pocket-passing prowess that the all-time quarterback greats’ possess in Tom Brady, Aaron Rodgers, and Peyton Manning. Which explains Kaepernick being sacked a daunting total of 31 times, with eight coming from that heartbreaking goal-line loss to the St. Louis Rams two weeks ago. Another observation to take into account is how Kaepernick’s capability to use his legs has been diminished for quite some time. Where is the effective read-option play that the 49ers’ have perfected last year?

On a positive note, Frank Gore, the 49ers’ heart and soul in number 21 still remains as the main focal point of success. At age 31, “The Inconvenient Truth” has been a dominant factor moving the chains, having already compiled 553 rushing yards to add to his golden (2005-2014) football career. Looking forward into the future, the 49ers’ have a bright prospect in the newly (2014) drafted Cincinnati Ohio native, rookie Carlos Hyde. Unfortunately, we will not be seeing the highly anticipated South Carolina running back Marcus Lattimore, attributable to his gruesome knee injury he sustained in college. With Kendall Hunter on season ending injured reserve, the Niners’ will have to finish out the regular season with their current two-headed beast.

Miraculously, defensive coordinator Vic Fangio has truly done something to turn this battered defense into a nearly formidable two-dimensional cohesive unit. Having to overcome some severe adversity losing the nine-time Pro Bowler Patrick Willis to a persistent left toe injury, and coping without the efforts of their (2013 NFC Conference Defensive MVP) NaVorro Bowman; the Niners’ still found a way to keep their stingy defense in tact. Filling in one of the best (ILB) tandems in the NFL league, Michael Wilhoite and unexpected rookie breakout Chris Borland (Wisconsin Badger) have done a spectacular job so far keeping the defense against the run as solid as possible; coverage in the passing game is still in need of some major improvements. According to Gamebook Statistics, Borland ranks 1st in the NFL with 43 tackles since Week 7 of the 2014 season. Let’s not forget his amazing fumble recovery in overtime against the New Orleans Saints, which set up Phil Dawson’s game-winning field goal.

In the Jim Harbaugh era, the 49ers’ will always be in on the “next man up” philosophy.

Fresh off a nine-game suspension, the gifted pass-rusher from the University of Missouri, Aldon Smith has currently been activated to the 53-man roster and is eligible to play against Tom Coughlin’s crumbling New York Giants (3-6) this coming Sunday. The 49ers’ have been struggling to provide a defensive spark in the pass-rush that could give their secondary a better chance of success in the pick category. Having the Smith brother’s on one end and Aaron Lynch on the other side could mean an offensive catastrophe for opposing quarterbacks. Not to mention adding Ahmad Brooks into the mix.

Will Eli Manning be the first quarterback on the receiving end of this upgraded pass-rush assault?

The 49ers’ seem to be in offensive sync after their nail-biting win against the Saints last Sunday. However, identity-wise can they stay consistent with the run, relying on Frank Gore to deliver the positive yardage to open up more play-action scenarios. With everything that’s going on outside of the 49er locker room in terms of Jim Harbaugh’s coaching methods and the questionable loyalty amongst certain players. The Niners’ need to stay optimistic and composed nonetheless, if they ever want another shot at lifting a sixth Lombardi trophy.

“Every week is a win or go home.” –Anquan Boldin