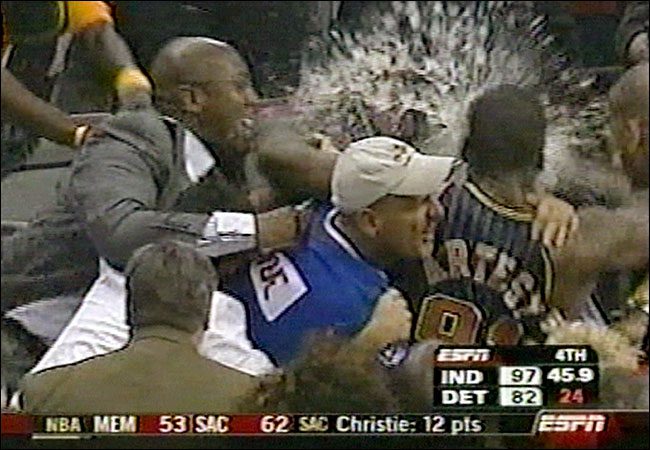 Welcome to an early viewing of my soon-to-be weekly segment, TGIFF: Thank God It’s Flashback Friday. Just about every Friday afternoon, starting next Friday, for the remainder of the NBA season you can count on an NBA column that is a blast from the league’s past. These columns will be conducted in all sorts of different formats and I’ll be evaluating games from multiple decades, so don’t get too comfortable; this is bound to be a very exciting journey over the last 50 years of NBA basketball. There are a ton of great moments in NBA history, so we might as well start one that NBA Hall of Famer Bill Walton called “the lowest point for me in 30 years with the NBA.”

The Match-Up: 2004-05 Regular Season, Indiana Pacers at Detroit Pistons (A.K.A. The Malice at the Palace)

Today marks the ten-year anniversary of one of the most damaging, controversial, and memorable moments in NBA history. My freakishly efficient memory makes it tough for me to differentiate whether a particular moment in sports, or anywhere else for that matter, is actually memorable because a ton of non-spectacular moments are easy for me to recall with pretty good precision. However, the “Malice at the Palace” is certainly on that list for all sports fans. You remember where you were when you watched the Malice at the Palace. I’m sure of it.

I watched the game with my parents, but abandoned it a little early to play some Madden 2005. The game itself wasn’t a classic. In fact, it wasn’t even close. The Pacers controlled the game from the start and handily defeated the defending NBA champions on their home court, just six months after being upset by the Pistons in the Eastern Conference Finals.

Not that that had anything to do with this game, but that particular playoff series consisted of six games that were rotting corpse-ugly. In four of the six games, one of the two teams couldn’t crack 70 points – Detroit edged out Indiana in an instant classic Game 6 by a final score of 69-65 – and only six players in the entire series shot better than 40 percent from the field. Those six players were Richard Hamilton, Ben Wallace, Darvin Ham, Jermaine O’Neal, Fred Jones, and Jonathan Bender. Hey, speaking of “John Bender” …

Anyway, you likely know how the rest of the story goes. With very little time left in a game that was essentially over, some of the starters remained on the floor. Indiana was up 97-82 with less than one minute left when Ron Artest, clearly not yet in the Metta World Peace or The Pandas Friend phase of his life, dished out a harder-than-normal foul on Ben Wallace as Wallace attacked the basket for a relatively meaningless two points. Wallace, armed with an all-time great afro and stylish bicep bands, wasn’t a fan of the foul and shoved Artest as hard as any human being possibly could. This is where things went downhill.

Now, before I go forward with this column, let me say something: I don’t normally condone violence, especially not in that sort of environment. There is no good reason why the “Malice at the Palace” should have happened, but it did happen and it’s been ten years. So when I say, “Here are my favorite parts of the ‘Malice at the Palace,’” I need you to understand that I’m not saying I hope anything like this happens again. I love the NBA and don’t want any sort of bad publicity for the league, and this incident was horrible for the league. It was one of the three most damaging NBA-related instances in my lifetime along with the Tim Donaghy gambling scandal – oddly enough, Donaghy was an official for this game – and the recent Donald Sterling controversy. But seriously, if I can’t sit here ten years later and break down this chaos in a way that brings light to the situation then I have no problem saying that everyone needs to lighten up a little bit. Nobody died or even got seriously injured. It’s just like laughing at the People Falling Down montages on America’s Funniest Home Videos … kind of.

So without further ado, here are my favorite parts of the Malice at the Palace, in chronological order:

In total nine players were suspended for their involvement in the event and five players faced legal consequences – Artest, Jackson, O’Neal, Anthony Johnson, and David Harrison. To this day, it baffles me that Artest’s suspension (86 games in total) was so much longer than the suspensions of Jackson (30 games) and O’Neal (15 games, though the sentence was originally 25 games before it was reduced on appeal), and Tinsley didn’t even get suspended for a single game. Jackson comes off as the craziest ten years later and Jermaine O’Neal threw the best punch. Artest was the first to charge into the stands, but he didn’t throw a punch until he was confronted by two spectators on the court. Yes, I’m actually half-heartedly attempting to defend Ron Artest.

David Stern has since acknowledged that the “Malice at the Palace” was the hardest incident he faced. It was a public relations disaster that soured a number of casual observers who got it in their heads that players were thugs. Over the last decade, the NBA has done a fantastic job of reinventing its image and gaining back a lot of those casual fans. And frankly, that’s good news for you and I.

Armed with a huge new TV contract and a truckload of young stars, the NBA’s future looks the brightest of any of the major American professional sports leagues. The NFL still has a stranglehold on the top spot, but head injuries, PEDs, domestic abuse cover-ups, and a borderline incompetent commissioner can submarine the league’s progress pretty quickly. MLB and NHL don’t have the recognizable stars that the NBA has and thus, they don’t get the viewers that the NBA does.

So, while we should certainly look forward to the future of the league, I encourage you to join me on this flashback journey to the past to see where the league has come from. Trust me, it’s gonna be fun.