Like a decent nerd, I pre-ordered my copy of Super Smash Bros. WiiU in February this year, about two weeks after it was announced for pre-sale on Amazon. Armed with my Prime subscription, I was ready to receive the game on the day it came out. Amazon, however had other plans. On Thursday, November 20th, I realized the game I was supposed to receive the next day had not shipped yet. Since Kris Kringle doesn’t deliver video games through the chimney on November 21st, I knew I needed more than a miracle to get my game on time.

The story ends well, kids, I chatted with Amazon, frantically using hockey-mom phrases such as “this is unacceptable,” “I am not sure how to feel about this issue,” – honestly, I don’t know where they came from. I think the thought of not playing on release day just transformed me. I am ashamed, even though it worked.

Not that any of that matters now. We have contact. I have opened the plastic wrap, ordered the pizza, gathered the nerd bros, and charged the batteries needed to use EIGHT (!!!) controllers. It is time for a real smackdown of the game (and each other). 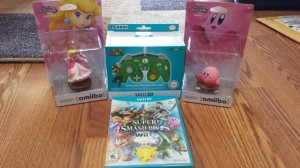 It feels as good as it looks

One of the most highly anticipated aspects of the new Super Smash Bros was the introduction of Amiibo figures. In my house, Peach and Kirby are king(s), so naturally, they were purchased to arrive with the game. Now I must have watched the Smash Nintendo direct three times, and at no point did it become clear that they were the friends you fight against, rather than the friends you train by using them in battle. Amiibos level up when you play against them, not as them. You are meant to use them as a battle buddy you send out, only to stay behind and watch them bleed out helplessly. Somewhere the lines got crossed for me and I can’t say I am not disappointed. I thought I would finally get the Pokemon I have been wishing for in the form of my favorite character, but I suppose I can settle for a battle buddy.

Now let’s talk graphics. And let’s say “Holy Moley” because they are beautiful. I saw Peach blink and for a minute my childhood came to life. I am sure my 50 inch screen helps the 1080p live to its fullest, and it’s amazing to see what I didn’t know was missing from my life. Gone are the obnoxious pull-outs when characters are too far apart from each other. In came the ability to snap a screen grab when your character bends to defy physics. Also gone is the ability to ledge-guard, as a character will be whisked into the center if someone is already on the ledge they are heading towards. 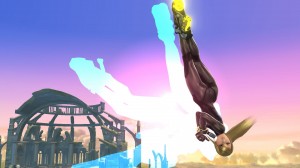 Finally, I’m proud to say that Nintendo has added some well-balanced lady characters for everyone to explore. I can’t speak for the rest of the gaming world, but I know my male friends have never shied away from playing as Peach, Pink Kirby, or Jigglypuff. I loved Kirby and I was loyal, until a whole group of lady challengers came into my life today. Each one finer than the last. I love Rosalina’s fairy-like wand and snide Luna attacks, Zero-Suit-Samus’ quick, nimble jabs, and Lucina’s general badassery. Speaking of assery, I give credit that the default of each female character is fully clothed.

There are also some fine and not-so-skimpy swimsuit options I didn’t mind. It was weird that the boys preferred to play as them. I wonder what that was about. 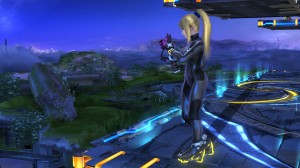 Really. No idea why. Doesn’t everyone load guns this way?

I loved the new ladies and am excited to keep exploring, but so far, Zero-Suit-Samus has my heart.

Can you tell I liked the game? I asked for some quotes from the Bros-dudes around me and I got “reminds me of Melee,” before someone else exclaimed “suck my d***k” to an attacking character. I will take that as a sign of good times. We may be cursing, but as long as it’s not at each other, it’s bringing us closer… right?

Verdict: Grab your kids, grab your wife, and press start.

Specials: Download the Neil deGrasse Tyson Mii with blaster. Do it.