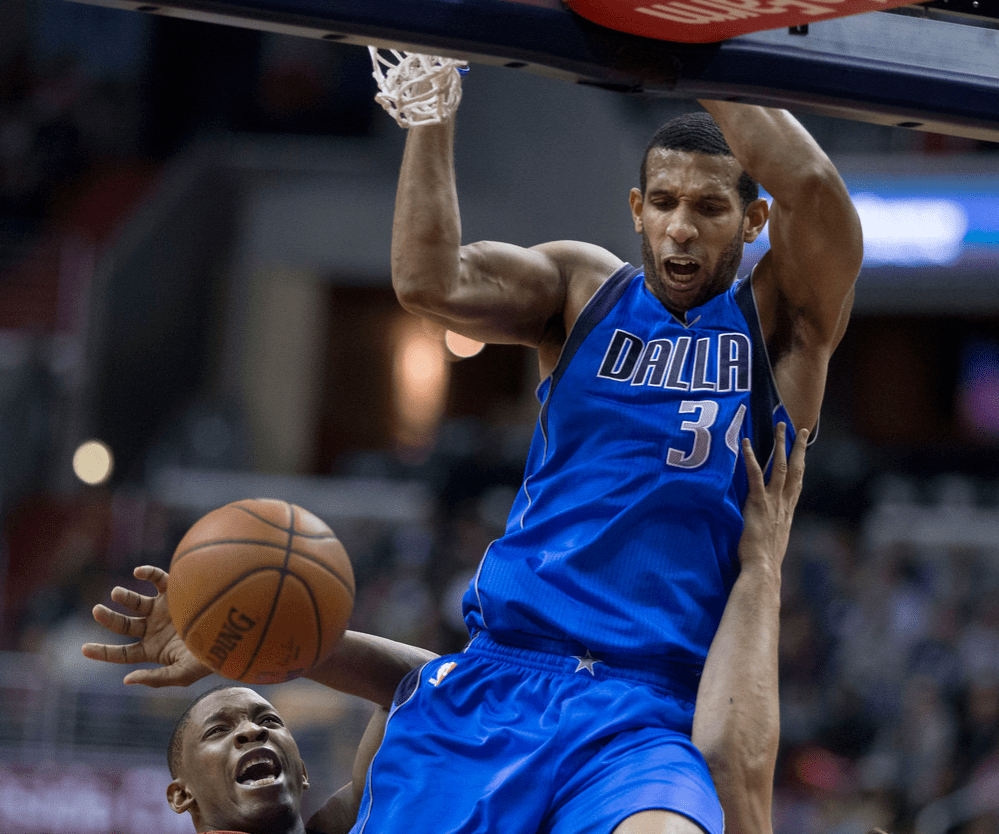 It’s a law of nature, a law we detest and wish to rectify: Man isn’t meant to fly. Gravity is a fickle bitch and wishes our feet to be firmly placed on the ground, our eyes all agog at the creatures of the animal kingdom who are freely able to take flight and soar above the clouds. Sure, okay, we have our artificial wings which are primarily used to get from Point A to Point B intact, but we rarely get to feel the wind on our face when propelling from the earth.

There was a moment in the fourth quarter when a casual observer couldn’t tell you which team was named after a type of bird. 27-year old Brandan Wright, who had been quiet for most of the evening as he fought off tetchy New Orleans Pelicans in the paint with his pernicious 7’4” dragon-like wingspan, saw an opportunity to lay down one of his infamous dunks over the heads of the Pelican offense. At that moment, he decided to take flight.

This is what Wright does. This is what the rest of the Dallas Mavericks are known to do – defy gravity in a way that can only be described as chimerical, if it weren’t so very, very real and in-your-face. Tonight, after a lackluster performance the night before in Memphis, Monta Ellis stole the show by bouncing back from his measly two-point game with a compilation of talents meant to immolate a seemingly cripple defense. This included scoring 13 of his 26 points in the final 4:27 of the game. “Coach (Mavericks coach Rick Carlisle) put the ball in my hands and my teammates have confidence in me to make plays around this time,” Ellis softly said to the media following his team’s 112-107 win over New Orleans. “I was looking to make plays and tonight I had it going in the fourth quarter.”

Okay, so what makes Monta the go-to clutch guy in the fourth? “Well, first of all great skill,” Carlisle expressed to the media when asked that specific question. “He’s an ultra competitor. He wants the ball when the heat’s on and he’s unafraid.”

“Monta was spectacular down the stretch again, made every big play we needed,” said teammate Dirk Nowitzki. “He’s fearless, he’s not worried about missing, isn’t worried about making plays, he wants the ball in his hands, and he’s in his prime.”

Ellis is benignant when it comes to his teammates and he’s quick to point out that he shouldn’t be singled out when each player brings it all to the table with their own variegated talents, like Nowitzki, Chandler Parsons, and Devin Harris who all scored 20 points each for the Mavs. The 29-year-old guard had been gingerly nursing a sore elbow the night before when the Mavericks took on the Memphis Grizzlies, which appeared to be the cause of his frustrating shooting game. But on Wednesday night in front of the home crowd, Tuesday’s loss evaporated inside the deafening roar of Mavericks fans.

Even though star Anthony Davis put up 31 points while teammate Jrue Holiday tacked on 30 points himself, the Pelicans couldn’t successfully subdue the Mavs’ offense. “I thought our energy coming out of the third quarter wasn’t great tonight,” Pelicans head coach Monty Williams said. “Those four or five first possessions were vanilla, as we say in our locker room.”

The piercing echo of the Mavericks’ whistling wings soaring high above the court on Wednesday night traced the walls of the American Airlines Center long after fans went home happy after witnessing the impossible: Man taking flight.

I’m still convinced Wright has yet to set his feet down on earth after that fourth quarter lob that nearly murdered the entire Pelican offense with its fatal quaking.

Speaking of fatal, Mavericks look to Saturday when they take on the titanium-built Golden State Warriors.