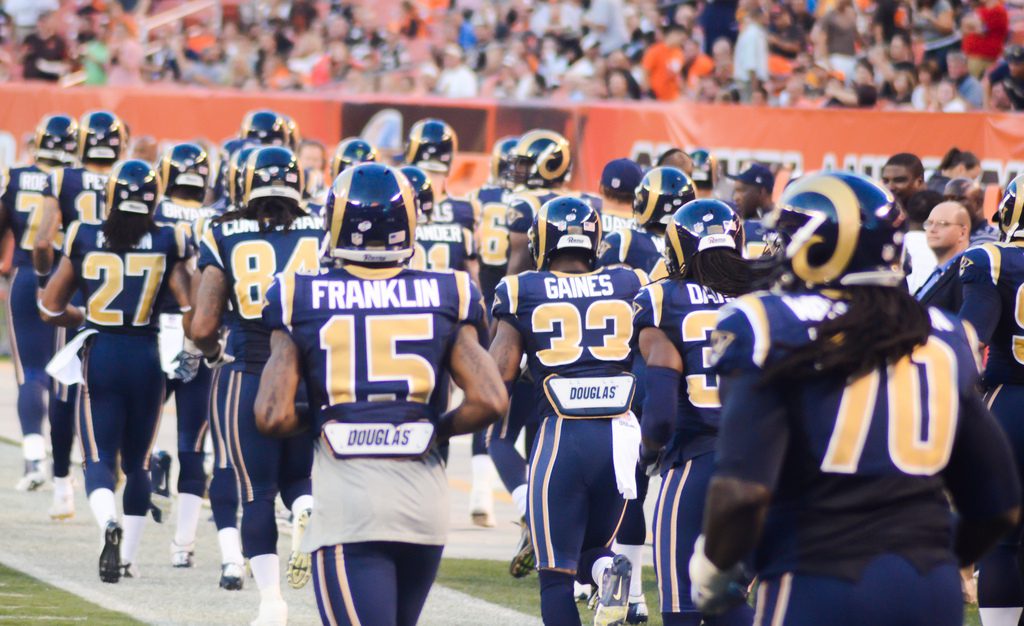 As always, let’s not waste any time with introductions. There are sixteen NFL Week 15 games on the slate, and you need to know who I selected in each one of them. As always, home teams will be in all CAPS.

I’ve got the 2015 version of the Arizona Cardinals—a.k.a. the St. Louis Rams—taking down the borderline fragile 2014 Arizona Cardinals. Both teams need to figure out what the long term solution is at quarterback, but outside of the most important position in football these are two very good football teams. I actually think the Rams have a higher ceiling going forward. Their front seven has a chance to be elite and I like St. Louis’ playmakers a wee bit better than Arizona’s. By the way, did any non-Redskins fan not enjoy what Jeff Fisher did for the coin toss last week against Washington? In case anybody forgot that the Rams won the Robert Griffin III trade, Jeff Fisher was there to remind you.

And if Jeff Fisher’s not-so-subtle reminder wasn’t enough for you, you could always just watch the game and see that Robert Griffin III had been benched.

If the Carolina Panthers can go into the Superdome and stomp the New Orleans Saints by 31 points, I’m done pulling for the Saints to represent the crappy NFC South in the playoffs. Consider me off that almost non-existent bandwagon. Give me the Falcons as our under .500 playoff team. Not only would I give the Falcons a better chance of pulling a Wild Card Round upset than New Orleans—that’s a testament to Julio Jones being a complete stud and Devin Hester always potentially having a two-punt-return-touchdown game up his sleeve—but what wouldn’t be fun about having Mike Smith, an all-time great time mismanager and someone who maybe shouldn’t have a job as an NFL head coach, leading a totally underwhelming four seed into a playoff game? I’m sold on the Falcons … well, about as sold as you can be on a 5-8 team bound to get shredded in a home playoff game in four weeks.

Tom Brady is 46-7 in December games throughout his career. Please drive forward to the first window.

The Raiders have won two of their last three games, results that might sabotage their chance to obtain the top pick in the draft. A visit to Arrowhead should bring the Raiders back to their losing ways. The Chiefs have dropped three games in a row, including a road loss to Oakland back in Week 12. Alex Smith can’t complete a pass more than ten yards down the field and that’s obviously a major problem for the Kansas City offense, but in a game with so much on the line I’d expect a noteworthy performance from a talented, albeit shorthanded defense against a Raiders offense that is far from consistent.

Don’t look now, but Houston is only two games back of Indianapolis for the AFC South division lead and just one game behind San Diego, Pittsburgh and Baltimore for one of the Wild Card spots. A Week 17 game against Jacksonville should be a gimme, but the next two for Houston—Indy and home for Baltimore—are the ones where the rubber meets the road for the Texans. A J.J. Watt led defense is capable of putting Andrew Luck and the Colts offense in an occasional spot of bother, but I’m dubious as to whether the Texans offense can put up the points to hang with Indy.

The Ravens at home against the Jags, who should be in full blown In The Pooper For Amari Cooper mode is a slam dunk. Let it be known that Baltimore is my stealth AFC Super Bowl candidate. Despite the fact that they’re a little too up and down for my liking, it’s a roster with some good playmakers and a quarterback who can turn into Joe Montana during a playoff run. It’s not a guarantee that Baltimore even gets into the mix, but they aren’t a team I would want to be facing that first playoff weekend.

Man, what a rough last month it’s going to be for the Bills and for my poor friends who are Bills fans that are yearning for a playoff berth. Buffalo had to deal with Peyton Manning last week, Aaron Rodgers this week, Derek Carr next week and Tom Brady in Week 17. O.K., maybe Derek Carr sticks out like a sore thumb in that previous sentence, but the Manning/Rodgers/Brady trifecta is a death sentence even for an otherwise stellar defense like the Bills. I don’t think Buffalo is that far away from being a legitimate playoff team. I think Bills fans would acknowledge that Kyle Orton isn’t the answer, though some might still be so sour on EJ Manuel that they’ve convinced themselves Orton is Jim Kelly 2.0. But they have a playoff caliber defense and some nice playmakers offensively. Let’s just say that if the Bills swapped Kyle Orton for Aaron Rodgers, the Bills would be a playoff team and the entire state of Wisconsin would riot.

Rodgers is pretty clearly the MVP of the league and Green Bay is a Super Bowl favorite just because Rodgers is otherworldly talented. The Packers defense isn’t Super Bowl worthy, but Green Bay could get there just on the shoulders of Rodgers. He’s that good.

For a cup of coffee I had the Bucs down as my pick in this game after I saw the unfortunate news about Cam Newton’s car accident, but then I remembered how frighteningly competent Derek Anderson has looked in relief of Cam this season. Really, picking between Derek Anderson and Josh McCown is like choosing which fart is the most pleasant smelling, so I’ll take Anderson’s odor over McCown’s.

Thatta boy, Mike Pettine! If there were ever a time to toss Johnny Manziel out there as the starting quarterback this is it—well actually, Pettine could’ve made the switch to Manziel at any point over the last three weeks without too much backlash, but still, it’s better late than never! Marvin Lewis calling Johnny Manziel a midget is such fantastic bulletin board material, but only if Johnny Football was going to be something more than Johnny Clipboard. I’m not the biggest Manziel fan, but the potential of a Johnny Football vengeance game heavily outweighs the possibility of Brian Hoyer looking like anything but a crappy excuse of a game manager.

I tried this last week with the Giants and Titans and it didn’t work out. I think I just pulled the trigger too early and had the wrong New York team in the mix. Once again, I’m picking this game to finish in a tie because quite frankly, I don’t feel comfortable picking the Jets or Titans to win a football game at this point in the season.

I’m not really sure why I’m taking the Chargers in this one. It’s just sort of one of those games where I picked San Diego from Jump Street and it seemed right to me every time I glanced at it, so I didn’t bother to do much more investigating. It’s not like the Broncos have looked like an unbeatable juggernaut recently, but they have found a consistent running threat in C.J. Anderson and Julius Thomas looks to be good to go for Denver after missing the last couple of games. It’s an easy case to make for the Broncos going into San Diego and ending the Chargers playoff hopes, but I’m expecting one of those typical awesome Philip Rivers games that he has like four or five times a year where after the game you think to yourself, “Jesus, this guy is really effing good.” To be honest, it’s not based on much more than that.

This one has some blowout potential. Seattle took San Fran to the woodshed on Thanksgiving night, and the Niners might be making a return visit there on Sunday. Jim Harbaugh looks like he’s spending more time figuring out where he’ll be coaching next season than game planning for 49ers games and Colin Kaepernick hasn’t played a good game since October. They couldn’t even get the job done against Oakland last week, so they certainly aren’t gonna hang around with the defending champs, who have super quietly put on their not-effing-around faces. Seriously, I’m changing my mind seventeen or eighteen times a day whether Seattle or Green Bay ends up representing the NFC in the Super Bowl. As of this writing I feel like it’s Seattle Green Bay Seattle.

Michael Bennett figured out what I had been saying for a while; Mark Sanchez is doing his best to impersonate a good NFL quarterback, but that impression has a limited shelf life. You know what else might turn out to have a limited shelf life? The spray tan business, as long as DeMarco Murray and Gina D’Agostini keep giving it a bad name. Seriously, I don’t condone cheating in any situation, but you’ve got to come up with a better cover than that! And what’s the point of even changing the contact name if you’re going to leave your “sexts” in your inbox? Silly people.

I just want everyone to know that I will be taking Week 16 off for three reasons. First, I’d like to give Steve Kubitza, my Baller Mind Frame competition in Weekly NFL Picks, a chance to scratch and claw his way back into this contest—Merry Christmas, Steve! Second, I’m itching to write a bunch of words about the NBA, so you can expect that next week at some point. Third, and most importantly, I’m going to need to recover after my Fantasy Football season ends. I can already see how it will play out: I end up going into the Monday Night Football game down fifteen points with nobody representing my team, Eat, Sleep, Conquer the League. Of course, Kenny Stills, one of my receivers that I will inevitably bench this week, will torch the Bears pathetic defense for 145 yards and a touchdown, five more points than I would’ve needed to win my hometown league for the fourth time in six years. Go ahead and lock that in as a guarantee. You can’t lose.