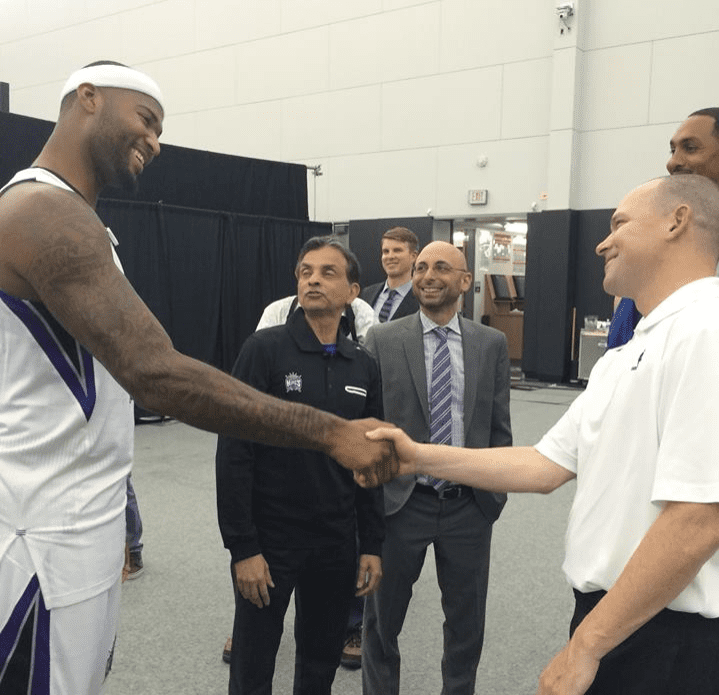 The future is a fog for the Sacramento Kings, but depending on who you talk to, its range of visibility differs.

Vivek Ranadivé and Pete D’Alessandro fashion themselves pioneers, the NBA’s Lewis and Clark, charting new territory in hopes of predicting that blurred path ahead. But instead of drawing on a cartographer, the two rely on math whizzes to chart their course.

To Ranadivé, basketball is a problem set and he’s trying to find the solution. The numbers are there, and, if configured correctly, the solution—the destination—will appear. In a Grantland video series on the Kings’ draft day preparations, Ranadivé framed his management’s mentality, “In the 21st century, math will trump science. And what I mean by this is you don’t need to know the why, you simply have to find the pattern.”

Ranadivé comes from Silicon Valley, after all, and approaches the NBA like he does the tech world, always trying to out-think competitors, and beating them with innovation. But in search of that Moneyballesque promised land, the Kings could be out-thinking themselves.

Last week, word started trickling out that Sacramento fired its head coach, Michael Malone. The move blindsided most that follow the league. It was so shocking because of the Kings’ even more surprising start. Sacramento went 9-6 against a tough schedule before DeMarcus Cousins went down with meningitis. Between then and Malone’s firing, the Kings managed a record more in line with expectations: 2-7. The front office seized on the slump as a cause for the firing, though the circumstances made the move seem more premeditated. (Suspicions that were later confirmed.)

Under Malone, Sacramento got off to its best start since Rick Adelman—the franchise’s most successful coach—was at the helm a decade ago. More importantly, the way he seemed to have the locker room straightened out and in-sync was reminiscent of the Adelman years, after eight more recent years of chaos and dysfunction.

Since letting go of Malone, the Kings have argued the move was one of progressive thinking, and that it had more to do with style than anything; Ranadivé said he wanted the team to play more to the tune of jazz than a marching band. Ultimately, the message was, this move would pay off down the road.

Only, the Kings’ actions haven’t been as progressive or forward-thinking as they’d have us believe.

Sacramento’s front office has been fiercely active since taking over for the old regime. By the trade deadline last season, most of the players from the previous season’s team were playing in different uniforms. D’Alessandro has brought in Rudy Gay, Darren Collison, and Ramon Sessions, among others.

What do these moves say about what the Kings are building toward, though?

They have perhaps the most talented center in the league in DeMarcus Cousins and they’ve surrounded him with mediocrity. Gay has taken big steps forward since coming to Sacramento, but he’s 28 years old, and look at the rest of the team. By the time enough talent could surround the two to be competitive in the postseason, Gay would likely be past his prime. Then, there’s rumors that the Kings are interested in adding Josh Smith or Deron Williams, two players beyond their primes with terrible contracts.

If the Kings were trying to build a contender, they wouldn’t be adding veterans and chasing Smith and Williams. They are doing those things because they are building toward mediocrity.

Ranadivé and company want to distance themselves from the train wreck that was the Maloof regime, and they want to do that by the time the new arena opens in 2016-17. How are they going to do that? By fielding an entertaining team that can make the playoffs. That seems to be the extent of their aspirations, and what this team is destined for.

Malone, with his defensive leanings, stern mentality, and affability is what the Kings needed to turn the franchise around, and he was doing it. He took a couple good players and a collection of castoffs, and made them into a competitive team. It would’ve been interesting to see what he could have done a few more years down the line with some foresight from the front office, rather than the unfocused aggression it’s shown on the market. Malone seemed like a stable solution to what had become a constantly unstable situation.

But the Kings were looking for something else going forward, perhaps something involving a 4-on-5 defense, or a system where defense isn’t an afterthought, it’s completely nonexistent. It seems strange, though, for Ranadivé to condemn the potential of traditional basketball, when a team like the Memphis Grizzlies is challenging for the West right now. That franchise was recently taken over by analytical minds, but rather than changing the foundation of the team—built around a bruising frontcourt—they augmented it. Kings management wants its 6’11”, 270-pound low post prodigy to run the Six Seconds or Less offense because, apparently, any team in the NBA is capable of playing fast. However, that doesn’t necessarily mean that every team should.

With Malone, Sacramento was building a culture that would pay off in the long-run, but Ranadivé’s chief concern is vanity, and that’s addressed in the short-term.

Look, if the Kings were building toward a championship, they wouldn’t be going after Smith and Williams (or, to a lesser extent, benching Ray McCallum for Sessions)—moves meant to keep up appearances in the short term; things would have to get ugly first (see: 76ers, Philadelphia). But Kings fans got that already. The end of the Maloof era was nothing but ugly, and Ranadivé (understandably) wants to run as far away from that as possible.

It’s admirable that Ranadivé and D’Alessandro want to blaze down a new trail, but they don’t seem to have as clear a vision of the ultimate destination as they claim. Perhaps it’s too late after firing Malone, but the two of them may need to re-evaluate and chart a new course.