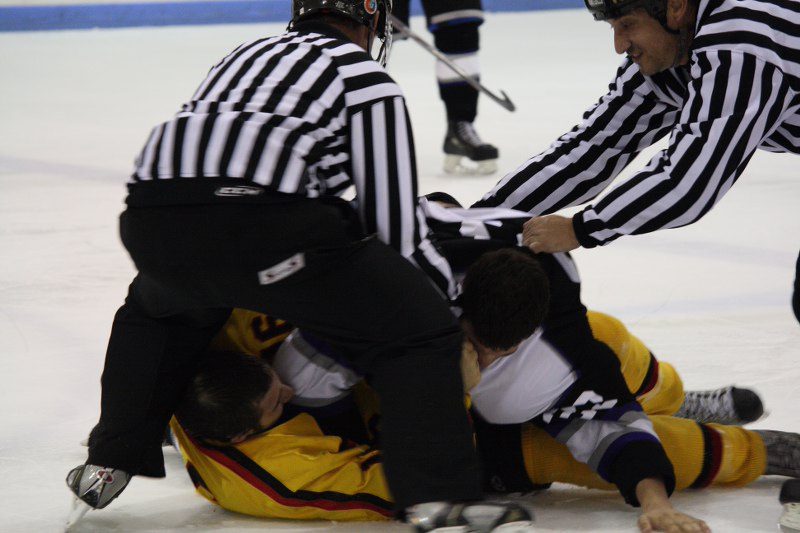 Sitting in the Air Canada Centre for the Toronto Maple Leafs-Anaheim Ducks game the other night, something unexpectedly donned on me: Hockey without fighting is just fine.

With time running out in the third period of a soon-to-be 6-2 thrashing by the Maple Leafs, Dion Phaneuf came across Tim Jackman and, to the delight of the crowd, the Ducks player dropped his gloves to initiate a fight after sustaining a slash. However, before any punches could be thrown, the linesman broke up the melee, displeasing the crowd.

Moments after, fighting didn’t matter anymore. Yelling obscene gestures at the “zebras” on the ice just seemed like a foolish thing to do.

At the end of the day, how would that fight have helped the momentum of the game, or helped anything with either club?

Jackman wouldn’t have been more respected by his teammates for going after the Leafs captain in the last few minutes of a meaningless game.

What if Phaneuf pulled a Connor McDavid and broke his hand? The fight was nothing special, but fans still uttered their disapproval. Because, at the end of the day, people love violence.

Don’t get me wrong, I am not anti-fighting, I am just against fighting for no reason. If you want to watch senseless violence, go watch MMA, where two guys bash each other’s heads in for 15 minutes. It’s more exciting than a hockey fight half the time. At least they don’t have to worry about a thin sheet of ice under their feet.

Ask any true hockey fan that has followed the game in the last two decades to name their favorite hockey fight. I bet they aren’t going to say it was a time that any player got seriously hurt, or a time where it was two goons like Colton Orr and John Scott squaring off for the hell of it.

Those fights can be entertaining, but the true hockey fan will probably tell you about a little tilt that happened during the 2004 Stanley Cup Finals. Two captains, the Calgary Flames’ Jarome Iginla and Tampa Bay Lightning’s Vincent Lecavalier, squared off in one of the most passionate and emotional fights in hockey history.

Both players are Richard Trophy winners who have represented Team Canada at the Olympics, yet there they are fighting during the Finals. This is where fighting is necessary and where the emotion should allow players to let go of that frustration in a heated fight. Fighting is necessary in such a fast-paced and aggressive sport, and it should continue as long as the fights are meaningful.

The “almost” Phaneuf vs. Jackman was a fight that shouldn’t have happened and it’s good that it didn’t. As the game becomes more skillful and more fast-paced, it’s good that teams have begun to adapt to less fighting majors.

For the game’s general managers that still say fighting and turbulence is the key to victory, they are living in the dark.

Look at the Detroit Red Wings, for example. They have made the playoffs for the past 23 years and, dating back to the first post-lockout season in 2005-06, have had the fewest fighting majors for nine consecutive seasons.

The Red Wings use skill to beat you, instead of their fists. They may not fight that often, but they are still a tough and hard-nosed team with players such as Niklas Kronwall and Justin Abdelkader, two of the most physical players in the league.

They use fundamental hitting and a different kind of toughness to beat up opponents every night, and it seems to have been working just fine over the past two-plus decades.

Fighting has its role and, although fighting has helped some teams during the regular season win games and excite fans, when it comes to the playoffs, it’s almost irrelevant. Post-2005 lockout, the Stanley Cup Finals participants have only averaged roughly six fighting majors for the entire playoffs and fans don’t seem to mind.

When comparing a regular season game to a playoff game in any sport, hockey is by far the most different. The atmosphere is more electric; the game is faster, more physical, yet there is less fighting. More fights may equal more excitement for people in general, but it doesn’t make it more exciting for the true hockey fan.

If the NHL wants to build a stronger fan base, “Guaranteed Fight Night” is not going to do it and it is good that the days of the “goon” are practically over. With more skill in the game, and less fighting, regular season play can slowly transform into a more playoff-like style of hockey every night.

Although fighting in the NHL should never have been abandoned completely, hockey games without fighting are quite pleasing. Building teams toward the Detroit Red Wings philosophy will further the game and continue to bolster the game to heights that they have never seen before.

Don’t drop the mitts to entertain. Drop the mitts when true passion and emotion ignite a fire that only a true fight can resolve.