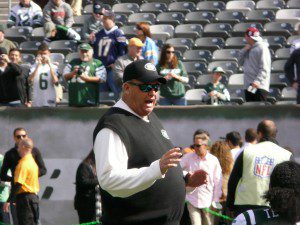 The Buffalo Bills brought on new ownership this past year. While general manager, Doug Whaley, has remained since Terry and Kim Pegula took over, I suppose there are still some rookie mistakes being made. Recently, the Bills announced that Rex Ryan would be the team’s head coach for next season.

I will begin by saying that I absolutely believe that Rex Ryan deserved to be fired from his post as coach of the New York Jets. I actually think it should have happened at least a year ago and even wrote an article about it. I fully suspected Rex to get a job in the NFL this year (unless he wanted some time off). And I could argue that Rex is better suited to be a defensive coordinator than a head coach, but that point is kind of moot. What I will argue, is that Rex made the lazy choice of where to go, and it is not the right decision for himself, or the Buffalo Bills.

If you’re wondering what I mean by “lazy choice” it’s actually pretty simple. I have always viewed Rex and his brother Rob as being old school system coaches. They teach their scheme, their terminology, and they truly believe that all they have to do to win is to execute the plan. The problem is never the plan itself. If things don’t work it is the players that aren’t executing. Rex has invested countless picks into the Jets defense over the past few years, trying to keep it at a level that works for him. The offense hasn’t been ignored, but certainly hasn’t been addressed with the same gusto. Changing the system is too much work for these guys, and it’s just one of the reasons players like playing for Rex. There isn’t a complex new scheme every week, and they aren’t asked to memorize a playbook that looks more like a phonebook.

So why is Buffalo the lazy choice? Several reasons. The first has to do with the players. Rex is walking into a team that has one of the better defensive units in the league. Rex didn’t want to have to develop players on defense; he wanted existing superstars on the side of the ball that he cares most about. The second reason, is Rex knows the team he’s moving to. He knows the players as he’s coached against them twice a year as long as he’s been with the Jets. Finally, he also knows the division (as it hasn’t changed). Expect to see very similar game plans from Rex’s time with the Jets, when the Buffalo Bills face off against the Miami Dolphins and the New England Patriots next season.

“Wait John, doesn’t it make sense for Rex to take over a team that fits with how he likes to coach and play football? Doesn’t it help that he knows his players, his staff, and the division he plays in? What is wrong with making a choice based on comfort?”

These are all valid questions dear reader. As far as taking over a team that fits with a coaching style, I can point to many more situations where teams have had greater success with coaches that breath fresh life, than those that try to hammer home a strength. The offensive-minded John Gruden took over a defensive juggernaut in the Tampa Bay Buccaneers, and won the Super Bowl the same year. Defensive mogul Tony Dungy steered Peyton Manning to his only Super Bowl ring. Bruce Arians came from the Andrew Luck era Indianapolis Colts and took over the Arizona Cardinals, who defensively excelled this year. While not a hard and fast rule, but I’d rather give a team a defensive head coach when they need help on defense.

While it can help to know your players, staff, and competition in advance, remember now that the same competition, players, and staff know you just as well. I often feel like first-year coaches with new teams have inflated numbers because other teams and coaching staff have no idea what to expect. Chip Kelly’s first year with the Philadelphia Eagles is a great example of this. By the second year teams have a better idea of how you’re going to use players and what you will do (sometimes referred to as the Sophomore Slump). There will still be surprises to a degree, but staying in the same division will mean that six games a year you’re playing against teams, players, and coaches that have extensive knowledge of what you do, and when you do it.

I have no issue with Rex taking a job with any team because he feels comfortable about what he will do. People make decisions like this all the time. But comfortable and “best” are not always in the same direction. For the Bills, Rex Ryan was a man that gave the team instant credibility. A coach focused on improving the team’s defensive prowess while creating some allure that might get free agents to want to come to Buffalo. What is not to like?  The issue here is the free agents that would want to play for Rex are defensive ones, and the team doesn’t really need a ton of help there. Offensively, this team needs more help than a drowning man listening to Barney the Dinosaur on a Sony Walkman. Rex just isn’t the right person to provide that help, and he should have known that. The Bills needed someone that could lure offensive talent, or more specifically, acquire or coach a quarterback, if the Bills are thinking about long-term success.

For Rex, a team with a solid offensive structure and a struggling defense would be a perfect place for him. The Denver Broncos may have been fun to watch with Rex on the sidelines, but I really liked Atlanta (though with his brother in the same division that may have been a bit incestuous) as a landing place for him. In either one of those situations, Rex would have allowed the offense to continue to operate as they have, while improving the part of the club that needed the most help.

The Bills are likely now going to see some improvement, maybe even just enough to make the playoffs a larger possibility than they were this year.  Ultimately, the team is doomed as the New England Patriots will continue to own the division until Tom Brady hangs up his cleats. The success will last as long as the Bills can keep the expensive defensive players happy with all the mediocrity that comes along with all things Buffalo. I did not put this “Rex” on you Buffalo, you put this “Rex” on yourself. Don’t’ say I didn’t warn you.