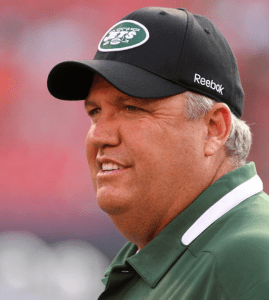 On December 29, 2014, one of my fellow writers here at Baller Mind Frame wrote a very well written and well-researched article on why he felt like Rex Ryan deserved to keep his job as head coach of the New York Jets. I respect the effort that Stephen Nixon put into his piece, and can appreciate Demario Davis‘ point that “all you can ask for as players (is) to have a coach that they love, and willing to lay it on the lone for him.” I agree with Stephen that one of the larger problems in New York was the quarterback. I can agree with all this, and still think the assessment of Rex is wrong, and that the team needed to cut ties with him.

To begin, the 4-12 2014 season moved Rex’s record as the Jets head coach to 46-49. I will point out that coaches with winning records often get fired in the NFL (ask Jim Harbaugh) and that there are higher expectations for everyone at this level. The NFL is most assuredly a “what have you done for me lately” league. So the comment from Stephen regarding the “back-to-back AFC championships seeming like a lifetime ago” is 100 percent accurate. On record alone I would argue that Rex needed to find a new place to call the plays.

The quarterback play of Geno Smith and Michael Vick have both been less than brilliant, and that is not Rex’s fault … or is it? It was Rex and GM John Idzik who decided that Mark Sanchez wasn’t crucial to their success, and that Geno was the best guy to pick with the 39th overall selection in the 2013 draft. Fun fact: some players picked after Smith include Kiko Alonso (46, Buffalo Bills), Le’Veon Bell (48, Pittsburgh Steelers), and Eddie Lacy (61, Green Bay Packers). They also decided to bring in Michael Vick. The brain trust of Rex and John also decided not to invest in a rapidly aging offensive line.

For two seconds though I will walk down the path that allows me to think that the personnel moves (draft, free agent, salary cap, and otherwise) and the subsequent play of said personnel are not the responsibility of the individuals selecting those players. That is to say that coaches and GMs are not at fault when a player or group of players has a bad year.

The Arizona Cardinals went through no fewer than three quarterbacks this year. In fact Ryan Lindley (who started the team’s wild card game) would have technically been the fourth-string quarterback as he was cut in training camp, before being invited back due to the injuries to virtually everyone else that was taking snaps for the Cardinals. Bruce Arians found ways to win with less-than-optimal personnel, and no one put up amazing numbers for the Cardinals. The Dallas Cowboys were supposed to have the worst defense in the history of the NFL (after DeMarcus Ware took his talents to Denver). Then the team had several key injuries to players like Sean Lee and Morris Claiborne. Yes, the defense wasn’t stellar, but Dallas still won a playoff game. What about the St. Louis Rams and what they did with a second-string quarterback? They beat the Denver Broncos, Philadelphia Eagles, Seattle Seahawks, and San Francisco 49ers.

Given the state of affairs in New York I don’t think anyone was expecting Rex to make the playoffs this year. With that said if your team is not winning, as a fan, supporter, or owner, you want to see growth. You want to see players excel and show that given a great opportunity they can be brilliant. The Jets are sending one player to the 2015 Pro Bowl, and that’s Nick Mangold. I’d argue that the only reason he’s going is because fans struggle to name two other centers.

I am a firm believer that coaches need to be given time to turn things around. The Oakland Raiders and Buffalo Bills are prime examples of teams for whom constant coaching turnover is ruining the team. These teams are not devoid of talent (thought they might be lacking in several key areas), but having a new coach every second season means players are learning the system more often than they are honing their craft. So with that in mind I stand by the statement that Rex Ryan and John Idzik needed to be fired years ago.

You want players to love their coach, but you need them to respect and respond to the teaching that a coach is supposed to provide. Just because a coach is loved doesn’t mean he’s a good coach. Wade Phillips was always viewed as a players’ coach, and managed to take a few teams to the playoffs, but could never win in the playoffs. Wade’s teams were undisciplined and often ill-prepared for the competition. Rex Ryan coaches with fire and intensity, and a love for the game. The problem I have always had with him is that fire never seems to apply to both sides of the ball. The offense suffered under Rex, and while defense can win championships you need to score some points.

Are there better coaches available than Rex Ryan willing to come and take over the absolute cluster-!*$# that is the current state of the Jets? I would say yes, but obviously only time will tell if the next coach is better than the last one. However, sometimes teams, players, and even fans need a change of pace. Something different isn’t so much better as it is needed in order for the team to try and take the next step. Here is a chance for both the Jets and Rex to have a whole new chapter, and to start things right. And we all know how much Rex likes getting off on a good foot.