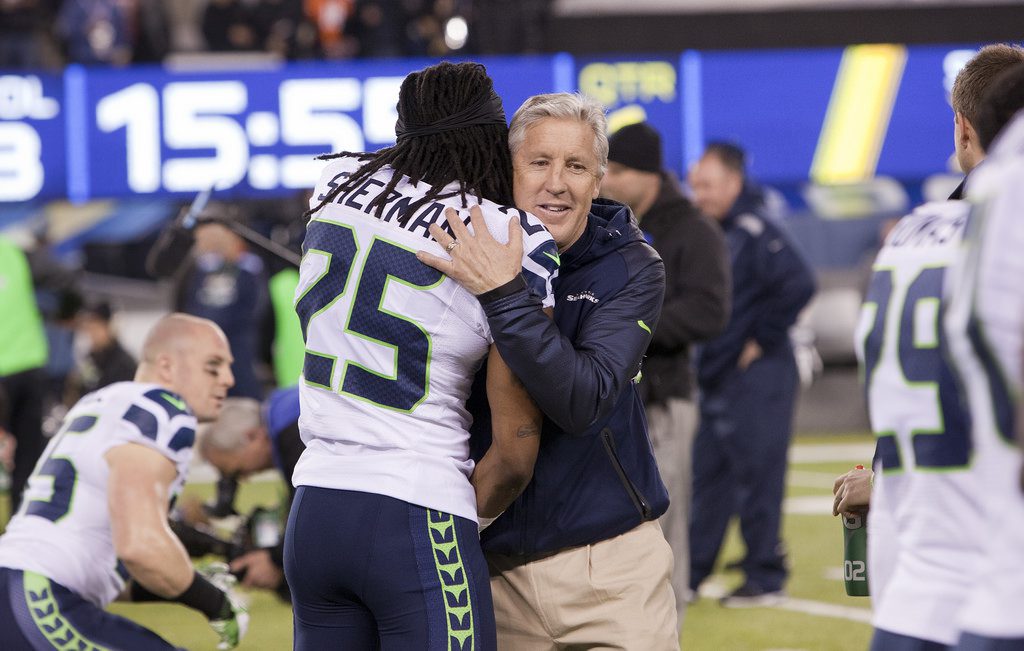 The Colts are pretty good. That vast understatement was one thing made clear last week when Andrew Luck and Peyton Manning‘s old team went to Denver and beat older Peyton Manning‘s new team. It turned out that Peyton was playing with a torn quad, but a loss is still a loss in the eyes of history.

This sets up a Indianapolis Colts and New England Patriots matchup that may lead to many senior citizens/those returning from oblivion to ask where the aforementioned Mr. Manning is.

An old rivalry is now renewed with the up and coming superstar Andrew Luck, but it may only last a few years as Tom Brady is nearing the end of his career. I find it easy to forget that Brady is up there in age with Manning because Peyton also gives off more of a dad vibe than Brady, although Tom’s dancing and awkward high-five encounters are what put him in the category of almost dad if not for a hot wife and a good head of hair. He is more Rob Lowe while Peyton is more, “I only buy and wear painter jeans, Rob Lowe.”

The Patriots are coming off of a win against the Baltimore Ravens in a game that saw Joe Flacco forget that he was indeed the “real” Joe Flacco. He threw for four touchdowns, but remained true to his identity and threw an interception late in the fourth quarter to seal the game for the Patriots.

It was a great win for the Patriots as they trailed for much of the game, but a glaring concern was their lack of performance in the run game. Baltimore has a top-five run defense, but fourteen yards on thirteen carries is inexcusable. This was aided by the deficit they faced leading to fifty passes from Brady and one from Julian Edelman (for a touchdown), but a lack of balance could doom them against the Colts.

Even with the dominance of the Colts in the playoffs thus far and Andrew Luck’s seemingly innate ability to pull wins out of his ass, (angry Browns fan voice), I think the Patriots will take this game outright, but not with the spread. New England is favored by seven points which is rather generous, but the home field advantage already spots about a field goal their way. It should be a close game, so I’ll take the Colts with the spread.

The NFC features a championship matchup between the reigning champs and a team that was helped by some referee karma. The Dallas Cowboys saw victory in hand until Dez Bryant let the ball slide out of his as he went to the ground, but rules are rules so the Green Bay Packers find themselves on the west coast this weekend.

Aaron Rodgers played the game on a calf that is far below 100%, which is apparently is an injury that leads to more success than a torn quad. It also helped that the game plan was geared toward playing with a quarterback that has one healthy leg.

Rodgers threw for three touchdowns while Eddie Lacy rushed for 101 yards in the tundra. My only worry is that while last week was a solid win, the game in Seattle will be more challenging.

The first reason being no other than the fact that the Seattle Seahawks have broken The Curse of the Defending Champion and are conceivably on pace to win back-to-back Super Bowls.

A second reason. Did you see Kam Chancellor jump over the line not once but twice, (TWICE?!?) to try and block a field goal.

Is that not insane enough for you? Here’s this demigod-like speed.

I truly believe that Kam Chancellor is not human, and the fact that he is on the Seattle defense along with Richard Sherman make is hard for me to see a hurt Aaron Rodgers have much success on Sunday. And the fact that the crowd will likely cause another earthquake does not help the Green Bay cause either.

This game sees 7.5 points added to the Packers’ cause, but picking Seattle looks like an easy choice to me in this one. People don’t want to believe that Seattle can repeat, but they are one of the most dominant teams to ever play in the NFL and it is an honor to watch.