This week’s Constantine was the second-to-last in the season and quite possibly the series. The episode was just okay. It was nice that they worked on the ensemble, giving big roles to both Manny and Zed, but the results of this attempt at character development were mixed. 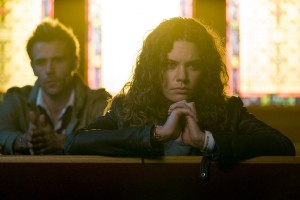 The most awkward scene in the episode had Manny– temporarily in a human body– stumbling through sex after being overwhelmed with human emotions, namely lust. Manny is using someone else’s body to have this sex and misleading the woman involved by letting her think that he’s the man who he’s possessing. It just felt uncomfortable to watch.

Constantine finds out that there’s a place Zed goes to escape her visions. He’s sympathetic but wants her to get back in there because “there’s a war on.” She says that she’s not ready. Chas thinks Zed needs her rest, but Constantine doesn’t think they can take a holiday. That’s when Manny shows up reminding him they definitely can’t take a holiday. This scene shows they’re capable of writing rapport between their ensemble and, in fact, this episode in general actually managed to truly utilize everyone in the cast for once.

Much of the episode was Zed having a crisis of faith as she wondered where her visions come from. She likes to think they come from God, but worries they might be evil. In the end, Manny doesn’t answer her questions, but tells her, “I’m here, aren’t I?” Heightening the stakes, Zed has what seems to be a tumor. It seems to be linked to her visions and this causes her to not want the mass in her brain removed because she wants to keep helping people. I have very mixed feelings about this plot. It’s nice seeing Zed have an inner life of any kind, but it’s also a lot of her just being self-sacrificing.

In a surprising move for the second-to-last episode, this episode didn’t further the main plot. Instead, it focused on a simple case-of-the-week about people being attacked in a hospital. Like most Constantine storylines, it functioned well enough but wasn’t especially memorable.