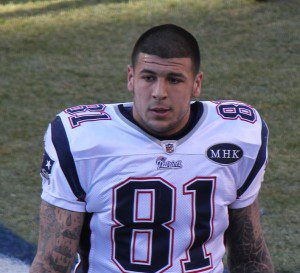 Former New England Patriots tight end Aaron Hernandez has been sitting behind bars since last June after being charged with the murder of Odin Lloyd. As the trial begins for Hernandez, some new developments could greatly impact how much more time he’ll spend away from society.

CNN reports that his fiancée, Shayanna Jenkins will join the prosecution side and will possibly testify against Hernandez.

According to reports, she met with Bristol County, Massachusetts, prosecutors in what court documents call an immunity meeting. The results of that meeting are secret, even from the Hernandez defense team.

“It allows the prosecutor to force her to testify in front of the jury without taking the Fifth” (Amendment against self incrimination), CNN legal analyst Paul Callan said of the order. “If she lies, she can still be prosecuted for perjury because a grant of immunity never (immunizes) someone against committing perjury on the witness stand.”

His co-defendants, Ernest Wallace and Carlos Ortiz, have also pleaded not guilty.

Whether or not Jenkins will implicate Hernandez in the crime has not been confirmed as of yet.