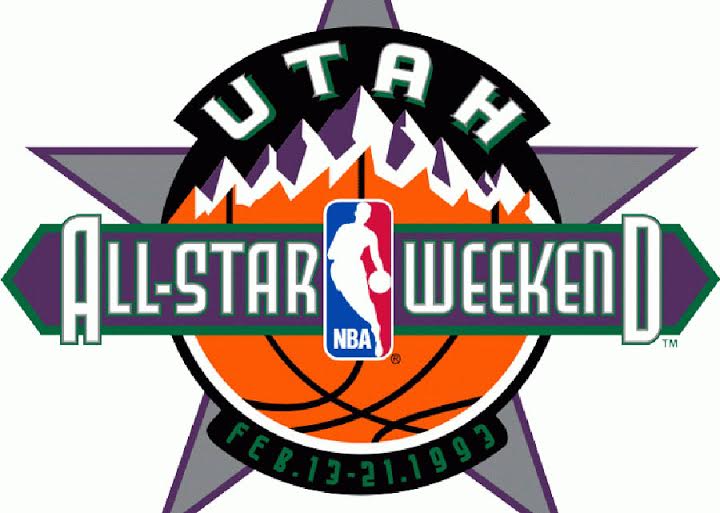 Well folks, as you likely know it’s NBA All-Star Weekend, the league’s annual celebration of its best players/a brief intermission in the season. Even though it’s flawed in just about every aspect, I do love NBA All-Star Weekend far more than I rightfully should. And to highlight this pointless love, a return of my semi-regular Thank God It’s Flashback Friday column is in order.

The Backstory
You’re probably asking, why pick 1993? Well, it was the first All-Star Game I was alive for, and in fact, the 1993 contest was played just one day after my very first birthday. The two games that narrowly missed the cut were 1987—arguably the most talented and most entertaining All-Star Game ever—and 2003—Michael Jordan’s last one, and a super fun game that was helped out significantly by a smoking hot Mariah Carey’s halftime performance. 1993’s All-Star Game was played in Salt Lake City, Utah, and for what it’s worth, I will always call Utah’s home arena the Delta Center. I think it’s called Energy Solutions Arena now, but I’m not sure and I’m not even going to check myself. Anyway, since an All-Star Game is just a show for the fans and not the most competitive basketball exhibition you’ll ever see, this notepad will be loose, careless, fun and hopefully informative … just like the All-Star Game should be.

The Notepad
• The announcers for NBC were Dick Enberg, Mike Fratello and Magic Johnson, who was just one year removed from arguably the most memorable All-Star performance in NBA history.

• Pat Riley and Paul Westphal coached the Eastern Conference and Western Conference teams respectively. Starting for the West All-Stars were John Stockton, Clyde Drexler, Charles Barkley, Karl Malone, David Robinson. For the East All-Stars, it was Isiah Thomas, Michael Jordan, Scottie Pippen, Larry Johnson, and Shaquille O’Neal. That’s right, Grandmama got the start in the 1993 NBA All-Star Game. And by the way, I’m 65 percent sure Larry Johnson deserves the lion’s share of the blame for all of those horrible Big Momma’s House movies.
• As Dick Enberg would later tell us, this was the first All-Star Game in league history without a Celtic or a Laker on the roster. Magic said he was willing to bet it would never happen again. Magic’s inability to separate personal opinions from his job was just uncanny. You would’ve thought Pat Riley was a living Saint given how Magic talked about him. And if that’s the case, then that would make Michael Jordan Christ himself. More on this coming soon.
• Speaking of Jordan, Enberg tells us that there is an edge to MJ coming into this game because of an incident that he had with Reggie Miller a few days earlier. Apparently Jordan was fined $50,000, and according to my calculations $50,000 in 1993 is equivalent to like $120,000 today, so I’m assuming Jordan tarred and feathered Reggie Miller at half court in the middle of the game.
• Prime Malone and prime Barkley getting out and running with John Stockton might be my favorite thing ever, and I’m not just talking about basketball things. All things are included. By the way, young Shaq was running the floor too and he could’ve fit in just fine running along with a stampede with large animals. Good lord.
• Just in case you were wondering, the rest of the rosters look like this: Dan Majerle, Tim Hardaway, Hakeem Olajuwon, Terry Porter, Danny Manning, Sean Elliott and Shawn Kemp for the West, Patrick Ewing, Mark Price, Brad Daugherty, Dominique Wilkins, Joe Dumars, Detlef Schrempf and Larry Nance for the East. A few sub-points based on this point:

o Dominique had a rough going in this All-Star Game, but for my money he’s a member of the all-time Slam Dunk Contest Mount Rushmore along with Vince Carter, MJ and Jason Richardson. And if you forgot how good Jason Richardson was:

o How about the Cleveland Cavaliers getting three guys into the All-Star Game? They couldn’t even do that this year with LeBron James, Kyrie Irving and Kevin Love on the roster. By the way, Mark Price is my pick for the under the radar really solid player of this game. A lights out outside shooter and the first guy to routinely split double-teams. It’s a bummer that he was injury plagued.

o For those who suggest that early 90’s NBA is far superior than today’s NBA, what do you have to say about Sean Elliott, Danny Manning, Detlef Schrempf (the first European to be an NBA All-Star) and a 34-year-old Larry Nance making the All-Star Team? Or how about Jeff Hornacek, Muggsy Bogues, Blue Edwards, Lionel Simmons, Buck Williams, Derrick McKey, Billy Owens and Tyrone Corbin finishing in the top ten in voting at their respective positions in their respective conferences? Damian Lillard didn’t even make the Western Conference All-Star team this year, so if you want to jump into an era vs. era debate, feel free to leave some comments down below. I’ll be happy to play along.
• After a third Isiah assist to Michael Jordan, Dick Enberg chimes in “Who says that Thomas and Jordan don’t get along?” This is followed by five seconds of nervous laughter from Magic, who finally comes up with “Well, they’ve learned to get along.” The NBA, where awkward conversations at the announcers table happens.
• I’ll give credit where credit is due; there was definitely more of a commitment to defense early on in the game than we’re accustomed to seeing in the 1st half of an All-Star Game nowadays. That isn’t a bad thing, in fact, that’s one of a few things in favor of past All-Star games in comparison to todays. The 93 All-Star Game had better uniforms (though, I must say I really do enjoy this year’s All-Star uniforms) and more defense, but modern All-Star games have longer shorts, less mid-range jumpers, and more exciting plays at the rim. Pick your poison.
• Magic Johnson referred to MJ as the greatest player to ever play this game: I find this interesting and infuriating at the same time. Jordan had won two titles at this point and had only been in the league for eight and a half seasons, and Magic said this like it was a fact. Um, why wasn’t the whole rings thing used against MJ like it is against players now? And why are people so blind to the fact that the NBA and their announcers did more for the Jordan brand than they do for any individual player in the league today?
• Enberg has made three goofy “Mailman” references to Karl Malone and it’s not even the 4th quarter yet. Why didn’t Marv Albert call this game? Did he really have something better to do than call this game?
• So, how about a game summary? It’s been close all throughout and really, no one has made the game their own yet. Jordan leads the way for the Eastern Conference, but I’d be willing to bet that he had at least five better ASG performances than this one. Mark Price has played really well off the bench, but not good enough to wrestle away a potential MVP from MJ. For the West, it’s even more up in the air. Malone has been the work horse, but Stockton has made the game at least 25 percent more fun for everyone else involved. Dan Majerle has played a nice game off the bench and David Robinson has played well enough that it doesn’t even seem weird that he started over Hakeem, even though The Dream was going to lambaste him two years later in the playoffs.
• One last “Oh my God I can’t believe the Jordan bias in this game” point: late in the 4th quarter Jordan goes over Barkley’s back and the refs call the foul. A pretty easy call, I must say. Fratello responds by saying dead seriously, “So what, it’s Michael Jordan. He should be allowed to do that.” If an announcer were to say that today only LeBron James was in Michael Jordan’s shoes half of Twitter would be out for their blood and Skip Bayless would probably have a life-ending stroke.
• The West was up 117-112 with 32.8 seconds left in the 4th quarter, but choked away the lead and let the game go to overtime. A Mark Price three-pointer played a big part, as well as a Patrick Ewing game-tying jumper, but sandwiched between those two baskets were Dan Majerle and Tim Hardaway both splitting pairs of free throws.
• The NBA All-Star Game is meaningless in many ways, but one thing that always interests me is the line-ups that close the game, if it is a close contest. For the most part, the ten guys out there actually competing late give a pretty good depiction of who actually mattered that season. In 1993, the East closed the game Isiah, MJ, Pippen, Shaq, and Ewing, with Price getting some burn late too The West closed with Stockton, Majerle, Malone, Barkley and Robinson. Really, isn’t Majerle the only guy who doesn’t immediately make sense 22-years later? And doesn’t it make more sense when you consider Majerle’s coach, Paul Westphal, was in charge of the Western Conference All-Stars?
• Anyway, despite blowing that five-point lead with 32 seconds left, the West hung on in overtime to win the game 135-132. John Stockton and Karl Malone were named co-MVP’s in front of their home crowd, and I’m perfectly fine with it. After all, the game is for the fans and the fans at the Delta Center certainly loved that duo.
If you care to check out the game in it’s almost entirety, you can do so by clicking here.