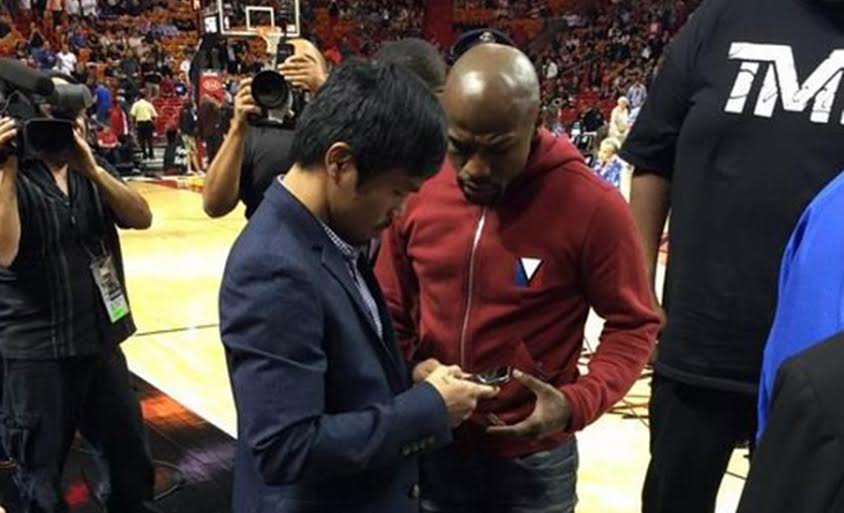 Floyd Mayweather Jr. and Manny Pacquiao have both finally scribbled on the dotted line to face each other in what will be one of the biggest boxing events in the history of the sport. The MGM Grand, and Las Vegas in general will become, well…richer. Hell, Bob Arum can finally earn enough money to buy his soul back. So, now that the dream match-up has been made, the only question left is this: who do you got? Say me say Manny Money, Say me say…

This stylistic match-up has always been an interesting one, as Mayweather has shown that he has trouble with aggressive, quick southpaws, and Pacquiao has shown us that he doesn’t fare too well against technically savvy counter-punchers. Devoted members of either side will go on forever and a day about how the man they’re backing is a sure win. Fanboy mentalities aside, it’s not going to be a walk in the park for either fighter. In a way, they can be each other’s kryptonite, depending on what they do in the ring.

Manny Pacquiao is an amazingly skilled boxer with power in both hands that’s able to hit his opponents from awkward angles. Speed kills, and Pacquiao is a blur in the ring. I’m pretty sure boxing him can feel like you’re taking on an octopus with gloves. Yes, he’s slowed down a bit, and is definitely a different fighter after he was dropped by Juan Manuel Marquez, but he’s still dangerous. If he turns up the heat, as he should, and utilizes a controlled aggressiveness against Money, he may just catch May. Zab Judah, who’s a quick southpaw, caught Mayweather, and so did power puncher Sugar Shane Mosley, who landed the best punch Mayweather’s ever tasted. Pacquiao matches Mayweather in hand-speed, and with his odd angles and large offensive arsenal, Mayweather could hit the canvas. It’s true that Mayweather can be caught, but finishing him becomes the problem after that, since he definitely has the ability to make adjustments and adapt.

It’s been said time and again, but I’ll say it one more time for good measure: Floyd Mayweather Jr. is one of the best defensive fighters in the history of the sport, utilizing his Philly Shell defense and exceptional reflexes perfectly. He’s also a master in the art of timing with his pin-point accuracy, barely wasting any energy on misfires. What he does best is the old “make em’ miss, make em’ pay” routine, which never gets old. I’m sure you’ve heard the occasional boxing viewer refer to his style as “running,” but check out this proper breakdown from the Mayweather himself. How frustrated would you be if you kept getting hit but couldn’t return the favor? His biggest advantage against Pacquiao is his ability to counter-punch beautifully. However, Pacquiao has fought more cautiously since his last fight with Marquez.

So, what happens if Pacquiao does catch Mayweather with a clean shot or even makes his knees buckle a bit with an accumulation of punches? As I’ve mentioned before, Mayweather has shown us his ability to adapt, recognize what’s working for his opponent, and then use that against him. Of course, Mayweather has also shown that he’s lost a step or two as well. He recently turned 38 years old, and he’s on the tail end of his career, but he continues to find a way to stay on top of the mountain because of his boxing I.Q.

Mayweather and Pacquiao are past the prime of their respective primes, but they both have enough left in the tank to set the ring on fire. Taking a look at their most recent fights, Mayweather has taken on better opposition (Canelo Alvarez and Marcos Maidana). On the other hand, Pacquiao has showcased that his speed and power are still very much there, even if his opposition hasn’t been top-notch. Regardless, both are still the best in the sport. This isn’t the match-up it was five or six years ago, but it’s still the best that boxing has to offer, and will cast a shadow that will drown any other sporting event that night.

Ego loves competition, and will go the extra mile to shine on the biggest stage. Floyd Mayweather Jr. runs on ego, and in his mind, he needs to solidify his place in boxing history by making Pacquiao a notch on his belt. On the other hand, heroes tend to shine in tough situations, and Pacquiao is a passionate pugilist that’s eager to win for his fans. These two are the best in the boxing world for our generation, and my hat goes off to both of them.

If Mayweather wins it, which looks like the best bet on paper, it will be the outcome that was most expected and the golden finish on Money’s TBE crown. If Pacquiao wins, the boxing world will be ecstatic, and the victory will be chaos in the ring if he puts a legendary blemish on May’s record, especially if it’s by way of knockout.

It’s a common thing for the head and the heart to go toe-to-toe with one another, and that’s exactly the case for this incredible match. The head points to Floyd Mayweather Jr. for the win because of the style match-up, and history showcasing that the technician usually has the upper-hand against a power puncher. The heart points to Pacquiao because he’s drawn out to be “the good guy” in this story; a humble, religious man looking to prove that the hero can prevail, even in real life. Yes, style does matter in boxing, but so does heart. To what degree? It all depends on the little things that happen and don’t happen. The ring is reality, and every punch thrown will paint history. The only guaranteed winner on May 2, 2015 is the sport of boxing itself. That bell to start the bout can’t ring soon enough.