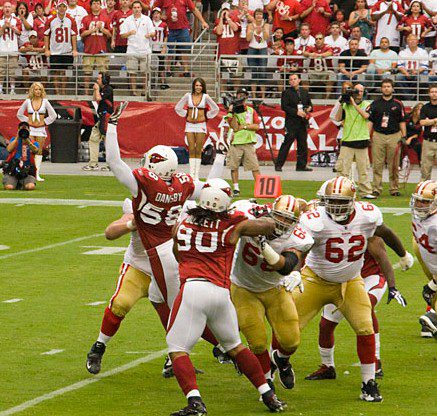 In the ultimate “screw you” move of the NFL off-season, Darnell Dockett has signed a two-year deal with the San Francisco 49ers for  $7.5 million.

Dockett has been the heart and soul of the division rival Arizona Cardinals since he entered the league in 2004, totally 40.5 sacks and 4 interceptions, which are fantastic numbers for an interior defensive linemen.

Unfortunately, Darnell missed the entire 2014 season with an ACL tear, but the 33-year-old is determined to make it back to his prior level of play.

Dockett was cut after he and the Cardinals couldn’t reach an agreement on terms of a salary reduction. He then agreed terms with the 49ers that are almost certainly less than what was on the table from the Cardinals.

The only thing that could top this is if Andre Johnson gets cut by the Texans and ends up signing with the Indianapolis Colts, or if DeMarco Murray signed with the Philadelphia Eagles.

Oh wait, both could totally happen this week!! This off-season is off with a bang.