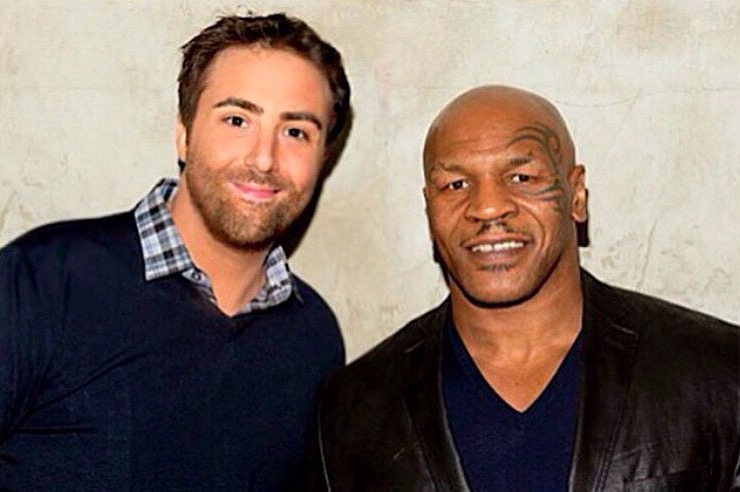 Champs classifies as a must-see documentary. Examining a boxing world that’s full of sheer intensity and raw spectator value, this multi-faceted feature also exposes the sport for its unfair business practices and failure to protect the athletes involved. Writer and director, Bert Marcus, has crafted a gem. I was fortunate enough to land an early screening of Champs in addition to an interview with Marcus. I’ll lay forth my review of the documentary as I quote and discuss the experience of speaking with the director.

The strongest component of Champs is its scope. It’s a sports examination as much as it’s a sociological insight into why boxers fight. Most of them, including the three studied in Champs – Mike Tyson, Evander Holyfield, and Bernard Hopkins – had been fighting their entire lives prior to ever stepping into a boxing ring. What did they all have in common during their upbringings? Difficult lives full of adversity and limited assistance from the surrounding world.

Tyson, who also acts as producer for the documentary, presents the strongest scenes. Marcus described working alongside Tyson as “incredible” and an “honor.” He mentioned how Tyson was “real and honest” in how he opened up for the sake of Champs. The audience is able to look past Tyson’s criminal convictions and intimidating exterior. Filled with regret, Tyson looks back on his boxing career with plenty of sadness.

When watching Tyson’s scenes, something about boxing struck me as profound. This feeling was echoed throughout Champs. No matter how hard these boxers had to fight in the ring, their biggest trials often occurred elsewhere during their careers. With shady businessmen and promoters looking to exploit them, combined with the lack of a union and bogus state-by-state control of the sport, Tyson, Holyfield, and Hopkins were representative of targets for those looking to cash in as they rose and fell.

In time, Tyson and Holyfield were both exposed by this disconcerting aspect of the sport. For Tyson, it resulted in bankruptcy. In Holyfield’s case, while he suffered financial disarray in the same vein as Tyson, he was also failed by those around him in their continual desire for him to fight despite his old age. With Tyson’s purchases and Holyfield’s late-career bouts, both fighters should’ve been advised of when to quit. Marcus stated how boxing is like the “Wild West” concerning how it’s orchestrated. Despite being the “sport of kings,” as he put it, the gladiators involved aren’t protected.

In the world of Hopkins, his fate was somewhat different than his counterparts. Due to multiple felonies, Hopkins was forced into a prison stint at an early age. What did Hopkins realize in prison? A truth that Champs has no problem putting forward: America has a faulty prison system. When I asked Marcus about this directly, he described the American prison system as a “major failure.” As mentioned in the documentary, our country represents five percent of the world’s population, yet has 25 percent of its prison population.

While part of this nationwide catastrophe, Hopkins became a prolific boxer behind bars. The sport gave him something to occupy his time in prison. It provided an avenue for him to release aggression that built up throughout his Philadelphia childhood. The same can be said for Tyson and Holyfield. In an effort to escape the violence around them, they practiced organizational, controlled violence. Beating someone up on the street is a crime, doing it in the ring is a gift.

With that gift, though, comes a price. And most boxers never develop the fame or fortune of the three boxers discussed in Champs. Marcus told me that in part because boxing lacks a union, the average professional boxer only makes about $30,000 annually. As they remain underpaid, they also suffer extensive head trauma without the presence of an oversight medical committee. From both a financial and health perspective, boxing fails its athletes. Champs delivers this fact with sharp ferocity.

These “modern day warriors,” as Marcus referred to them during the interview, allowed him to construct a “socially relevant” documentary. Marcus hit a key point in using those words. Champs, as mentioned earlier, isn’t just a sports movie. It’s a “socially relevant,” emotionally riveting picture illustrating not only the triumph of these athletes, but the seething pain that accompanied their journeys from struggling youths to legendary fighters.

Because of this pain, they’re able to use their experiences to help up-and-coming boxers. I specifically asked Marcus about what Tyson, Holyfield, and Hopkins are currently doing to help modern boxers. This question came to my mind after seeing their activity toward the end of Champs. Marcus stated how each boxer is attempting to improve the sport. After all, if it’s going to fix its flaws, some of boxing’s greatest fighters, and most notable victims, should play a role.

By any means, Champs has to be seen. Everyone can benefit from giving this beacon to boxing’s ills an opportunity. It simultaneously praises and exposes a fascinating sport. It indicts America’s atrociously designed prison system. Most notably, it tells the stories of Tyson, Holyfield, and Hopkins, narratives that manage to be hopeful and tragic. Champs and my experience speaking with Marcus left me with a newfound look on boxing. Beyond that, it caused me to respect the fighters brave enough to step inside the ring, working out their peripheral demons in the form of aggressive jabs and haymakers.

Champs is in theaters, on demand, and on iTunes March 13. Check the trailer below to heighten your interest.