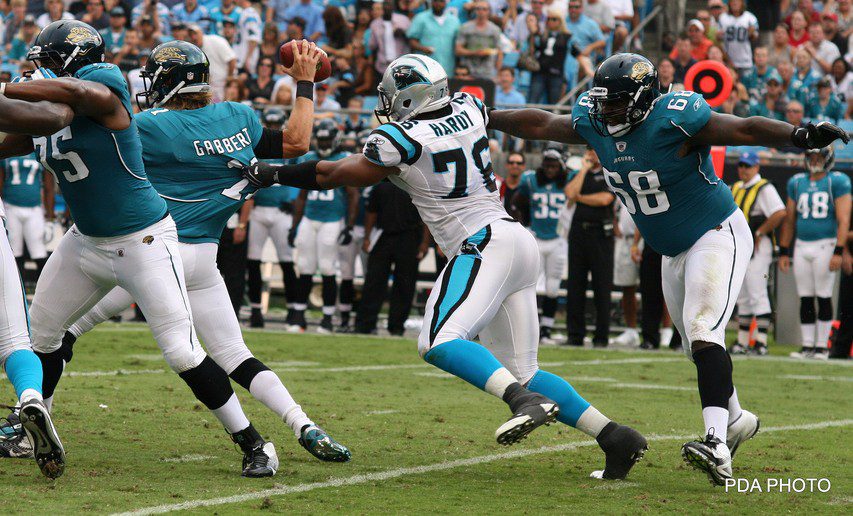 In an article I wrote months ago I suggested that in order for the Dallas Cowboys to maintain their spot atop the NFC East, they would have to go out and take some chances on a few players who had a few character concerns. The benefit to the Cowboys was that these players would come with pay cuts equal to the size of their baggage. Greg Hardy was one such player I called out. So, when I heard on NFL Network that the Cowboys had signed Hardy I smiled, and then immediately asked the question “for how much?” My smile turned into a puzzled expression of equal parts disgust and disbelief when I learned Hardy signed a one-year contract worth over $13 million dollars.

Let us get the two (very tiny) positives of this contract out of the way right now. The contract has roughly $2 million of that money coming in the way of performance bonuses, based on Hardy’s play in 2015. In an article I wrote a few weeks I spoke of the new contract for San Francisco 49ers standout Aldon Smith. Smith had his own issues with the law, and the restructured contract allowed Smith to prove his commitment to the team, while allowing the team an out should other issues creep up again. The solution for both sides was a similar performance-based contract. For the Cowboys, this contract structure allows them some financial reprieve should Hardy find himself in hot water. For Hardy, this contract shows that he is willing to bet on himself, and his ability to have no further run-ins with the law. It was a contract structure I thought the Cowboys would be able to institute with Dez Bryant.

With those two small “pros” out of the way, let’s move onto the “cons.” The way I see it, this year ends one of four ways – 1) Hardy shows up in his Pro-Bowl form from 2013, and has no legal issues, 2) Hardy loses his elite status, but still has no legal issues, 3) Hardy shows that he can still be elite, but the season is cut short by legal issues, 4) Hardy shows signs of severe rust, and the season is cut short by legal issues. With each and every case here there is a definitive loser, and in some cases both parties have lost. Let’s break it down further. It is important to note that while the Cowboys only owe Hardy $11 million in guaranteed money for 2015, so long as Hardy is on the roster the entire $13 million is put against their salary cap.

1) Hardy shows up in his Pro-Bowl form from 2013, and has no legal issues
In a normal situation this is where both sides win. The Cowboys get an elite-level player for the year, and Hardy earns his contract. But with a one-year contract, Hardy is a winner both during the season and in the offseason, to a degree. With the contract over, Hardy is now able to earn an even larger pay day, and may leave the Cowboys high and dry. The Cowboys win for that one season, but are now forced to take a very large financial gamble to retain Hardy, based on limited experience with him, or lose his services altogether. The Cowboys end up as long-term losers in this situation. It’s worth noting that even with a tremendous season, teams may still view one year of perfect behavior as insufficient cause to take a long-term financial risk on a player with character concerns.

2) Hardy losses his elite status, but still has no legal issues
Here is a scenario where the Cowboys lose large, but Hardy is still losing long-term. The incentives in the contract are based more on Hardy participating, than on firm stats. Him playing downs, attending practices, things he wouldn’t be able to do if he were suspended. If he’s paid $13 million and he’s coming into the game in a situational capacity then that’s a large price tag to swallow if you’re the Cowboys. So much so that a few games in, the team may cut him to free up the cap space. For Hardy, it’s a short-term win. If he manages to play the whole season, it’s $13 million dollar pay day, but it sets up poorly for his next contract talk.

3) Hardy shows that he can still be elite, but the season is cut short by legal issues
This is probably the most heartbreaking for both sides. While the Cowboys are financially safeguarded to a degree, this would gut their already shaky defense and would have everyone wondering, “What could have been?” For Hardy, it would prove that the incidents from last year were not an aberration, and up to $2 million dollars goes out the window. Hardy is likely unable to find work again, for anything less than minimum money to start, and the Cowboys are rebuilding along the defensive front.

4) Hardy shows signs of severe rust, and the season is cut short by legal issues
Dallas ends up wasting valuable cap space, even after they cut Hardy (if it get’s that bad). Hardy now ends up having a hard time (if not an impossible time) finding another NFL gig.

What would have made the most sense, what I thought was going to happen, is Hardy signing a contract for two or three years. The contract would be incentive-based, and the guaranteed money would be equitable to one full season of play at the fully incentive-based value. Something like $24 million over three years with $8 million guaranteed, $3 million a year base with $5 million a year in incentives. What this contract would do is allow the Cowboys time to see what they have, without locking them into anything long-term. It would also give Hardy some time to shake off rust, build a foundation of trust, and get acclimated to a new defense and system.

Hardy is only 26 years old (turning 27 this summer). While physically nearly ideal to play the end in a 4-3 scheme, his first two years in the NFL netted him only seven total sacks. It is possible that the new scheme in Dallas, and a year away from football, will see his abilities regress from his 15-sack performance in 2013. While the one-year contract has some potential positives for both sides, I see those positives as being short-term at best. The players and teams should be thinking about the long-term success of themselves as a unified entity, rather than individuals doing what is best for themselves at that exact moment in time.

The Cowboys need this to work out, as the loss of league-leading running back DeMarco Murray to the hated division rival Philadelphia Eagles had many questioning the team’s ability to contend. However, a repeat of the 2013 version of Hardy puts the team right back in the mix. Hardy needs this to work out to allow himself the opportunity to continue a career in the NFL. The NFL needs this to work out to prove that players have the ability to learn from their mistakes. With all that pressure in place everyone has only a year to find out. One NFL season is all it will take for us to know who the biggest loser in this decision is. If I’m the Cowboys, Hardy, and the NFL, I would have liked a little more time. If nothing else, it gives someone else the opportunity to screw up and take some of the spotlight off of this story. Actually, given the recent track record of the NFL, maybe you could get that distraction sooner rather than later.